Before studying abroad in the Netherlands, I was confident in my knowledge of the aspects that define safe bicycle infrastructure. I believed in my ability to solve problems associated with the dangers of inadequate bicycle facilities in the United States. Yet, within hours of being in the Netherlands, I quickly realized that my solutions were naïve and missing vital details. 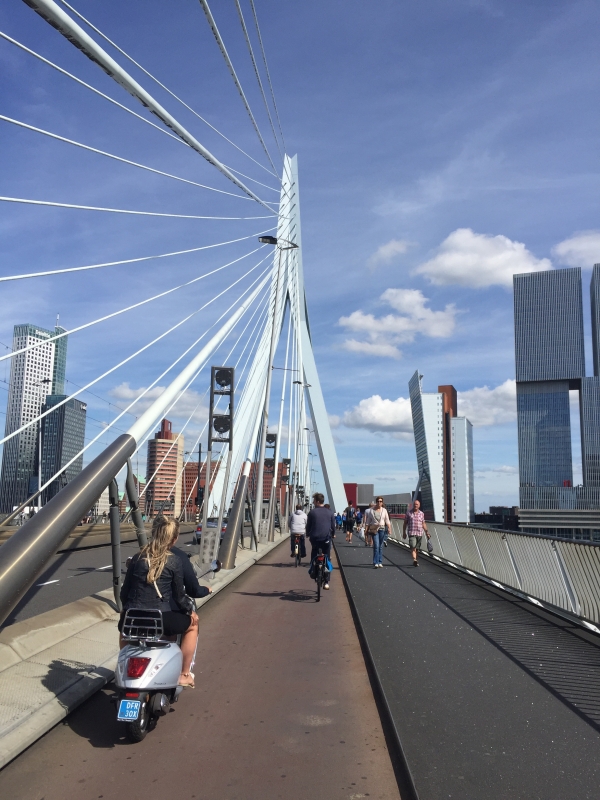 The Sustainable Transportation class taught by Dr. Kari Watkins, truly enriched my academic experience at Georgia Tech.  My trip to an environmentally conscious country introduced me to new perspectives and insights into how we can retrofit our land use policies and roadway designs in the United States, so that they offer people of all ages and genders the safety and support to walk, bike and utilize public transit.

Each day during the study abroad trip, we traveled to a new city via bicycle or train, where we met with public officials and engineers to talk about the history and future of their local transportation networks. The Netherlands has one of the most expansive regional bicycle networks in the world, which is getting more built out every year. In 2008, 28% of all trips n the Netherlands were made by bike. For all age groups, the ration of women to men using a bike for transportation is one to one.

In comparison, as of 2008, the United States has a bike mode share of about 1%, where the majority of cyclists were men (Buehler and Pucher, 2012). These statistics alone suggest that we, as Americans, have a lot to learn from the Dutch.

I sprightly returned from my trip inspire, humbled and eager to share my new ideas. Unfortunately they were grudgingly greeted with responses, such as, “well, that would never work here.”  As engineers, it’s our job to figure out how to adjust and tweak microscopic to macroscopic dynamics of the infrastructure so that they do work here.  The Sustainable Transportation class not only exposed us students to different transportation systems, but it taught us how to apply what we learned. As part of the class, we worked in teams to redesigned a roadway, in Atlanta , according to the Netherlands’ design standards.

Through studying abroad, I learned that there is not one solution or one formula for creating a “sustainable” transportation system. Instead, it’s our job, as global leaders, to observe and absorb, without judgment, the methodologies different counties and cultures implement to approach obstacles, which we can potentially use (or mimic) to solve our own similar problems in the future.