Now that my jet lag is mostly gone and I’ve warmed my cold hands/feet with the Georgian heat, it’s time to reflect on my time in the Netherlands. Although I could write an entire book about it, I will spare you and just offer the highlights:

The smooth integration of biking and transit made it easy to get just about anywhere. The abundance of bike parking at the transit stations, coupled with the easy transition from street level to parking, made ditching the car almost too easy. Furthermore, the train portion of the trip allowed me to free up my hands to get some work done (like write my blog post!).

Separating bikes, vehicles, and pedestrians with variable sidewalk and roadway heights is a popular design principle used by the Dutch. After my trip to the Netherlands, I understand why. Not only is this separation safer, but it is more comfortable for everyone in the right-of-way. It was almost comical listening to the Dutch explain their rides in America because sharing space with cars moving 45mph absolutely terrified them.

An even greater testament to the safety of Dutch bicycle infrastructure is the lack of helmets. After 50+ miles on my bicycle, I can count the number of helmets I saw on one hand, and even then, they were only worn by children. We could delve into whether I fundamentally agree with this, but regardless, the lack of helmet use spoke volumes.

3. Biking, biking everywhere (and everyone)

Bike paths are everywhere. They are in the city, countryside, and alongside freeways. There is almost always a well-planned space for cycling that provides a direct path from point A to B. I also loved the diversity of bikers. In the United States, a common argument is, “people don’t want to cycle.” Although true, this is only because riders aren’t given a thorough network of bicycle paths that provide a high level of safety like the paths offered in the Netherlands. We do not see women, the elderly, or children biking alone in the United States. In the Netherlands, these groups seemed to make up the majority.

However, no one is perfect, and before the US starts plopping bike infrastructure haphazardly into its right-of-ways, there are some considerations that must be taken to account, which brings me to…

Whether we’re talking about bikes or cars, traffic still exists. Morning rush hour is still a thing, and there are even conversations about widening bike lanes that are already 8 feet wide. Even though just about everyone detests traffic, it is a sign that a transportation system is being put to good use. On the bright side, at least an increase bicycle traffic does not mean an increase in carbon emissions.

There were a handful of opportunities to bike without our 20+ person group, but I noticed that during these times I found it harder to properly use the infrastructure because I had to navigate my own path. I oftentimes found myself biking on the wrong side of the street or taking a turn incorrectly. The citizens of the Netherlands most likely do not have this issue because they receive a formal education in cycling, and oh yeah, they have been doing it their whole lives!

3. Cars are still bigger than you

Most of the time I felt safe. Biking through Amsterdam at 5:00 PM on a beautiful, yet bustling Saturday afternoon was a testament to this. Cars were patient and pedestrians stayed on the sidewalk. However, there were still a number of near-misses. The near-misses usually occurred when I had to cross vehicular traffic, whether in an intersection or during a left turn. Curbside loading/unloading was also frequent for both passenger vehicles and commercial trucks, creating another scenario where I did not quite feel comfortable weaving out of my dedicated lane into faster-moving traffic.

I hope to use what I’ve learned in the Netherlands to better shape the built environment in the United States. Incorporating bicycle (and transit) infrastructure into our transportation system will make our communities more livable by offering increased mobility and decreased vehicular congestion. As for me, I have pledged to swap my car for my bike for at least 1 trip per week. It may not be much, but it’s a start. After all, enduring change doesn’t happen overnight, but gradually, and for that, the United States should have hope. 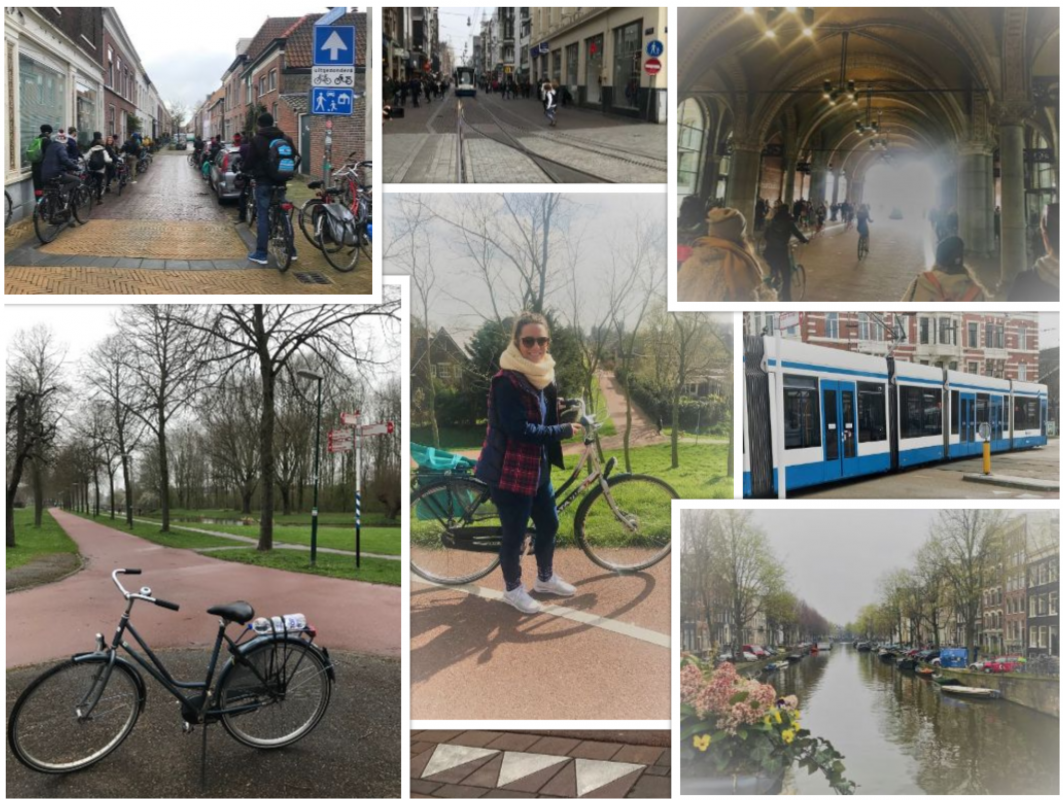