Where am I from?

I consider myself American, but feel my home is in Singapore. When my family moved to Singapore when I was 8 years old, we had one car which my dad would take to work. At an early age I was taking public transportation and taxis independently. I enjoyed the freedom given by the public bus network, but I wish it was extended further across the city, so I wouldn't have to take taxis by myself and send my mom the license plate and drivers ID for safety. While there I went to an international school for elementary grades with people from all over the world. I learned new languages, experienced different cultures, and traveled Asia and Oceania. This is home where I grew most surrounded by diversity.

There were two different driving exams in Singapore depending on your occupation. My parents both took different exams as my mom stayed at home and my dad worked. My dad’s test was extremely difficult and took a couple hours to complete, and my mom finished hers in 30 minutes. This seems crazy to me that drivers are not held to the same standards. I learned how culture can guide transportation rules solely on my parent’s experience that it seemed as though certain people are expected to be on the road more often and those people are held to higher driving standards.

I traveled to several different cities growing up from developing to developed countries and noticed drastic differences in infrastructure. This inequality inspired me to become a civil engineer to improve public infrastructure. Developed countries like Hong Kong, have a huge network of trains, buses and taxis, while developing countries like Cambodia have sand roads where most people bike or motorcycle, and vans are provided for tourist groups and wealthier individuals. Infrastructure affects people’s everyday life including where they live, how they travel and the people they interact with. I realize how fortunate I am to have lived in Singapore in an interconnected city with opportunities I wouldn't have had without great transportation services and other infrastructure.

One of the most compelling places I traveled is Sydney while studying abroad. I had a card that allowed me on public ferries, trains, and buses. This was amazing to me that all three modes were joined together to connect the community, and even that locals could pass by the Sydney Opera House every day via ferries. I included an image below of a ferry passing by the Opera House taken by the NSW Government. This influenced my thinking that if cities like Sydney can successfully adopt multi modal transportation, so can cities in the United States. 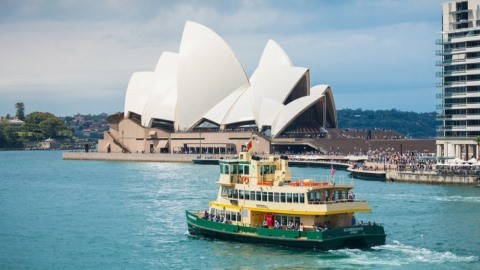 This is my first transportation course. I biked for internships in both Atlanta and Orlando and have noticed driver’s intolerance to bikes. The American culture seems to view bikes as recreational rather than for commutes. My goal is to learn about patterns in transit networks and how they are influenced by popular opinion and state goals. I’m interested in biking as a form of independence and how cities are designed to promote a healthy lifestyle with access to people’s needs within a biking distance.