My name is Liston Mehserle, and this semester I’ll be writing blog posts exploring sustainable biking infrastructure throughout the semester as I take CEE 4660, Sustainable Transportation Abroad. Previous to attending Georgia Tech, I lived in a medium-sized town by the name of Perry, located an hour and a half south of Atlanta. My experience with transportation there was not in any ways what one would think of as sustainable or effective. While I once saw a small sign noting an intercity bus service, public transportation was nonexistent. More recently the transportation authority has been painting bike lanes on certain routes, however a culture dominated by automobiles lead to high speeds and a lack of mindfulness of cyclists that removes the option for all but the most reckless of those looking to travel on two wheels without a motor.  Shown below is a comparison of Midtown and my home zip code from Walk Score. 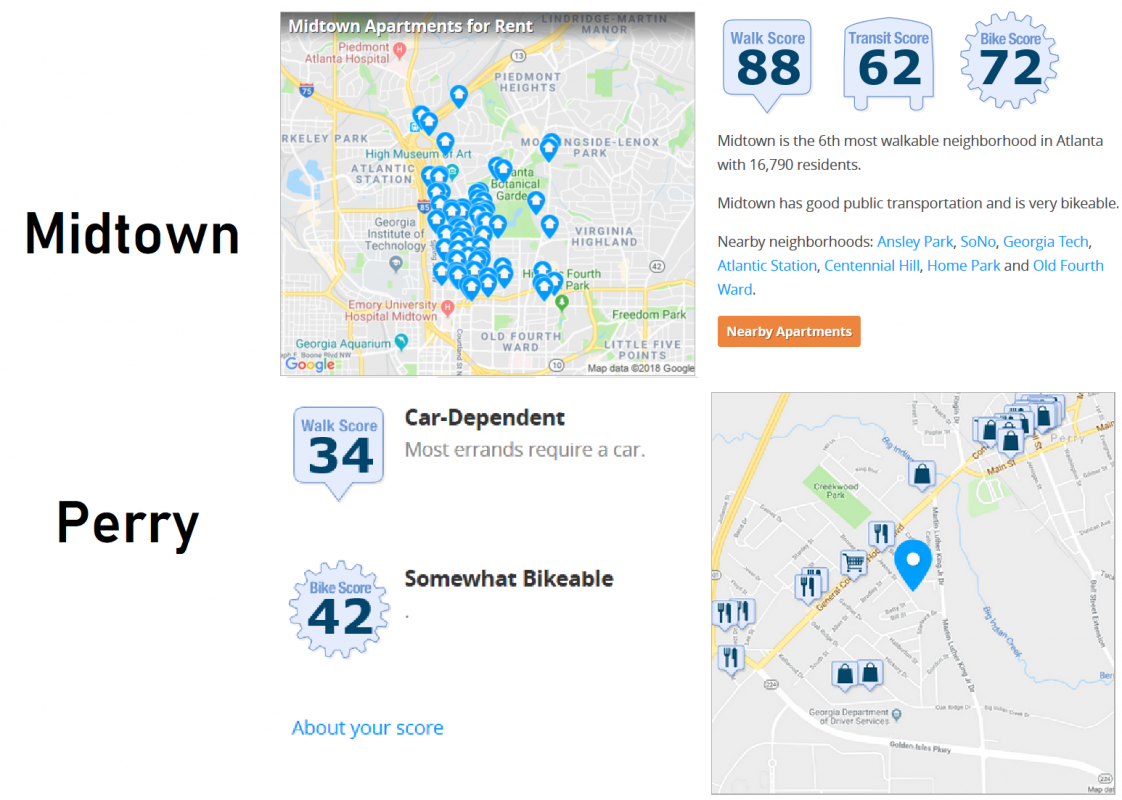 Lack of infrastructure for all but the automobiles is a theme, as sidewalks are few and far between. There are multiple factors leading to Perry’s approach to infrastructure. Rural development with its lack of dense planning created large distances between residents and points of interest. It is not unheard of to travel 15 miles or more to a point of interest, especially if located in an outside community. Perry’s start as an agricultural society led to most residents depending on trucks and other vehicles to haul equipment and resources. Ultimately, the general apathy towards transportation effectiveness and lack of concern towards personal or environmental health leads to a situation where there is little to no outlook of improvement to the transportation system.

In all fairness, I had no interest in transportation before arriving in Atlanta. In my mind, only one metric mattered: speed. It was not until a radical conversation with a traffic engineer, where it was remarked that a goal for Midtown was to slow traffic, that the gears began to turn, and I started to realize the dynamic nature of transportation. Over time I also began to bike quite a bit. Initially my interest in biking was more due to fascination with the mechanical side of the machine, but over time I’ve begun to value cycling more as a mode of transportation. This is due to the experience I’ve had zipping around Midtown by bike. Biking as a mode has proven to be loads of fun and has convinced me that the bike is the best way to get out and experience your surroundings. While I may drive past a small shop in a car and completely miss it, the lack of separation from the environment and reduced speed of a bike allow for a more mindful transportation experience.

With that, we now come to my purpose in taking this class. While I’ve enjoyed biking, it is not hard to make the claim that the bike as a mode of transportation in America (especially the South) is severely underutilized. Looking at places like my hometown and even much of Atlanta, the lack of quality biking infrastructure serves as a major hurdle if people are to view biking as a legitimate option for all. Additionally, beyond the physical barriers, I hope to investigate any cultural factors that stand in the way of cycling. Studying the Dutch approach to cycling excites me as the bike is ingrained in their culture and is prioritized in their approach to transportation. The Netherlands should serve as a great case study as I look to start a career in transportation that can hopefully bring the bike and public transportation to the forefront of transportation in America.

Additionally, I’ve never had the opportunity to travel to a country outside of the United States, so I would be remiss not to mention the fact that I am grateful and downright excited to visit a new culture and setting. Be it the tulips or the herring, I am ready to visit the Netherlands!