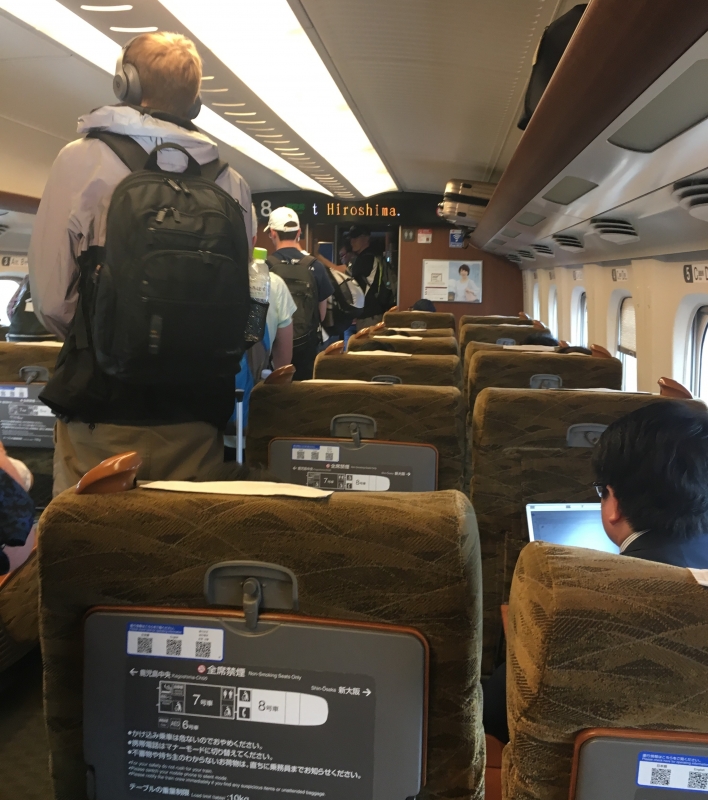 Unfortunately, I haven’t experienced much intercity travel beyond the United States. While traveling in America, I’ve only ever flown from city to city or driven in a personal car. As such, I’ve never ridden on a train, let alone a bullet train. After traveling around Japan for a week, I now have incredibly high expectations for train systems in other countries. I was expecting the trains to be like that of movies: personal booths along a hallway. However, the shinkansen is more like the layout of a plane. There is a central aisle with rows of seats on either side and room for baggage above the seats. The shinkansen is much more comfortable than a plane. The seats are spacious with generous leg room. There are outlets in each row of seats to recharge devices. There are bathrooms, smoking rooms, air conditioning, and a food and drink trolley that consistently runs us and down the aisle. However, shinkansen vary slightly in size and amenities. The first shinkansen we rode had slightly less leg room but more outlets than the shinkansen I rode from Tokyo to Kyoto. This comfort is important, as the shinkansen have an annual passenger count of roughly 143,015,000 people. The shinkansen also serve the same purpose as domestic American flights; traversing the country to take passengers from major city to major city. In America, flights have roughly 741.6 million annual domestic passengers, but most planes only carry around 175 people. The shinkansen can carry up to 1,300 people, making it more sustainable. Airplanes are more convenient in America, as they can travel up to 907 km/h while shinkansen travel around 320 km/h. America is also larger, and less streamlined than Japan. The shinkansen is more sustainable and comfortable, but American flights are more direct, faster, and convenient. I would be pleased if America began using shinkansen or other large scale, sustainable transportation, but that would require a large infrastructure investment. 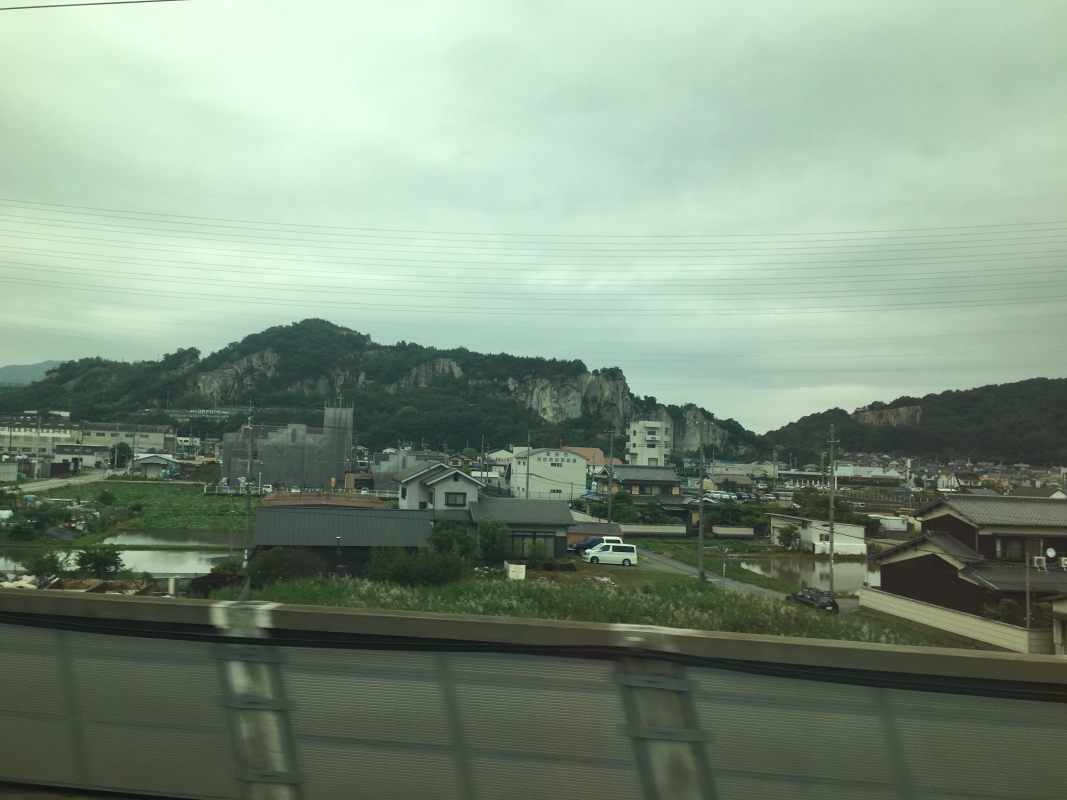 Aboard the shinkansen, the train is usually silent. Most patrons sleep, read, eat, and listen to music with headphones. It is very peaceful. The punctuality of the shinkansen is beyond peer. The layout of the shinkansen may be similar to a domestic American flight but not the reliability. Flights plan extra time for terminal and runway delays, and even then, sometimes they cannot arrive on time. Shinkansen leave the minute they are scheduled to depart. A shinkansen once made national news when it departed 20 seconds before it was planned. The exactness of the schedule is appreciated until you miss a shinkansen from a delay from a connecting train. Due to “dangerous conditions on the tracks,” our train taking us to our shinkansen was late by over an hour, making us miss our reserved shinkansen. However, shinkansen traverse the country frequently enough, we only had to wait an hour or so to board a different one. 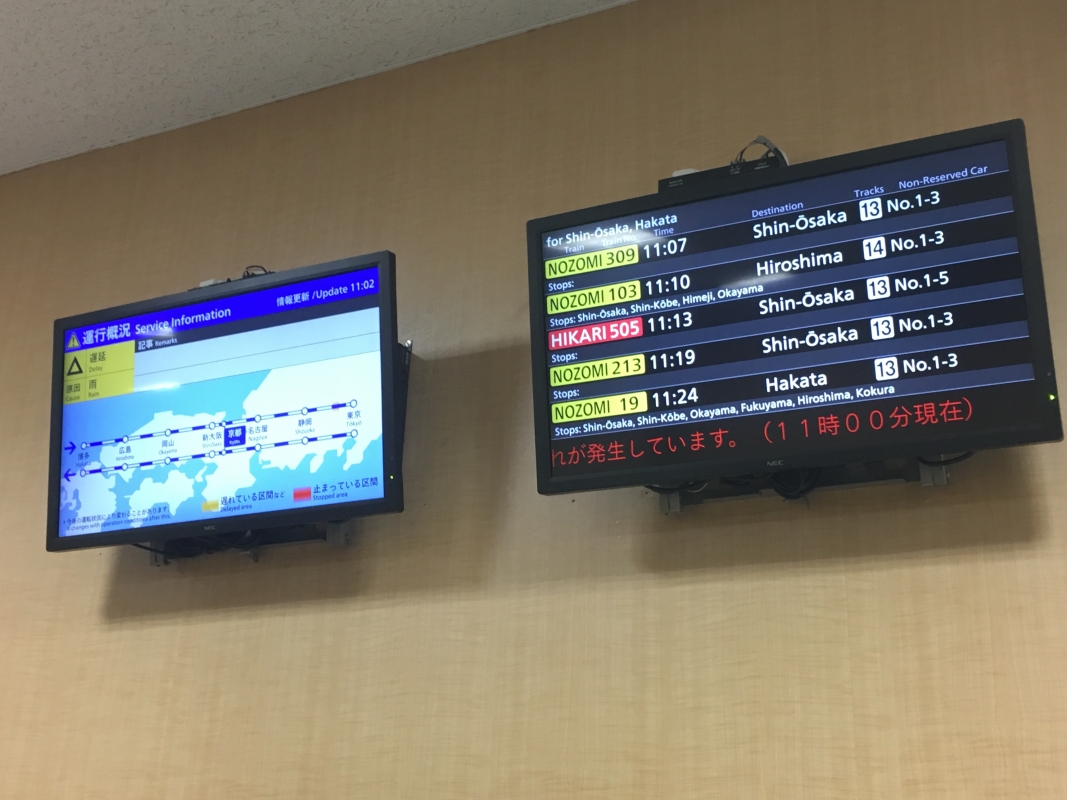 JR makes it extremely easy to get to the shinkansen. They have a separate area for shinkansen than other JR and subway lines. It is clearly marked, and any station personnel could help direct you to shinkansen. Once in the station, the train number, the time of departure, the destination city, and the track number is displayed on screens when trains are scheduled to depart. This information is in both Japanese and English, making it incredibly easy to understand. Navigating the shinkansen lines is straightforward because there are so few lines, unlike the Tokyo subway system. There’s only a one line going from place to place as opposed to several going to the same station. So instead of having to decide between the Yamanote or Chuo like in Tokyo, you are given a ticket that says Tokyo to Kyoto. If you know what city you’d like to go to, you can easily get there.

All of this makes the shinkansen incredibly easy to use, especially with a JR pass. For a system to be sustainable, not only must it be environmentally friendly, but easy to use. A system could be the greenest system in the country, but if it is difficult to use, people will avoid it, negating the sustainable efforts. Shinkansen combine comfort, convenience, and sustainability making it an optimal transit system.