Learning about Tokyo’s Transit System for a Day

The Japanese transit system is something most people have heard about. The reason it is famous is because of its efficiency as well as ability to support large scale ridership in a way that seems so effortless. The transit system is used by most of the locals which usually causes a lot of rush and business, especially before work starts and after work ends for the white-collar workers. The punctuality of the trains, as well as ease of usage is a big reason the system is loved by locals and tourists alike.

When I landed in Tokyo and was eager to explore the beautiful city, I got nervous about the language difference, especially when it came to the transit system as that was what my primary method of transportation was going to be. Turns out that was not something I should have worried about because all the transit stations have an English sign and announcement for everything that they have in Japanese. This accessibility of information, especially for a non-Japanese speaker such as myself, made traveling in this transit system easy, and easy traveling is a big indicator of whether a transit system is successful.

After spending an entire day traveling around Japan with my fellow classmates in a ‘Tokyo Transit Tour’ led by Dr. Kari Watkins, I realized how important the punctuality of trains was to the transit system. All the various transit companies do their best and work together to ensure all train arrivals/departures happen exactly when they are supposed to. This timeliness is what I believe to be the biggest reason this transit system is so successful as it gives people a reason to rely on it which makes people want to come back and keep using it.

I made a lot of observations during the rides on the various lines we took with various types of trains (Heavy Rail, Monorail, and Automated Guideway Transit) and learned a lot. There were very few flaws that I found about the transit system, them being: low handicapped accessibility, no water fountains, few trashcans, and interchanging sides of walking in the station (which confused me occasionally). During my rides I also became curious about the product design of the ‘grab handles’ on the trains and why they were designed to move as freely as they do. Overall, everything that I saw from the transit system impressed me and provided me with better insight of what any transit system should aim to be like. 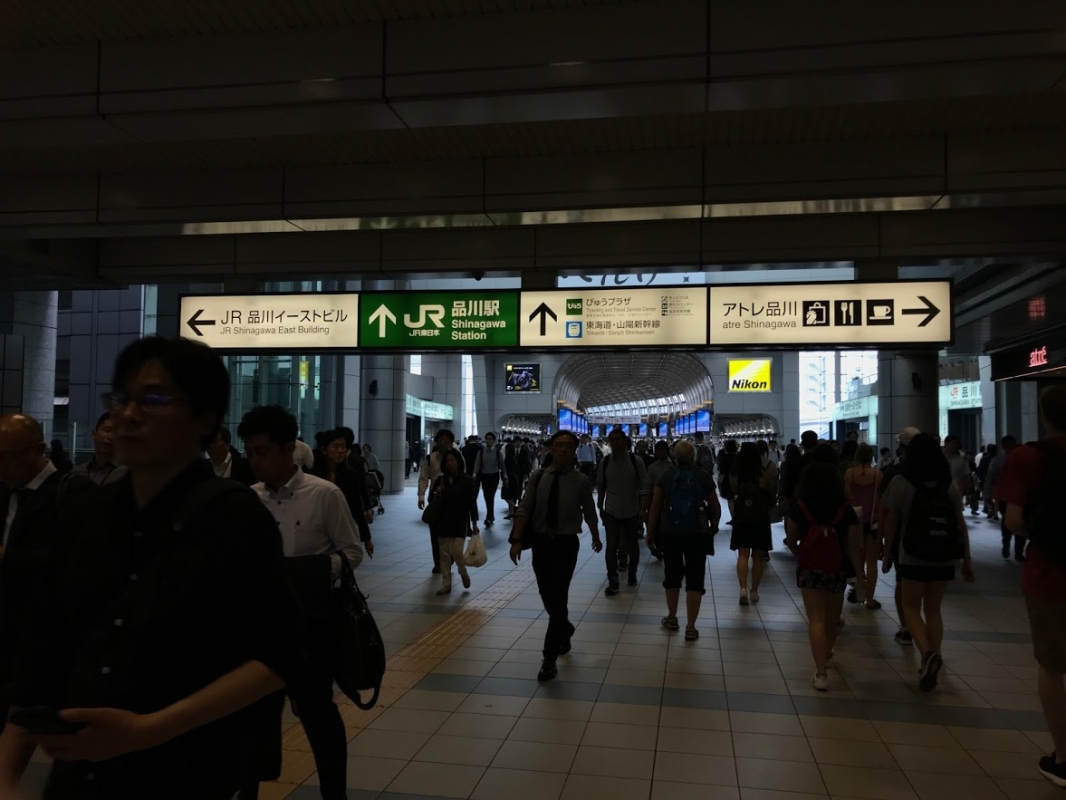 Example of Japanese and English signs in the Shingawa Station. 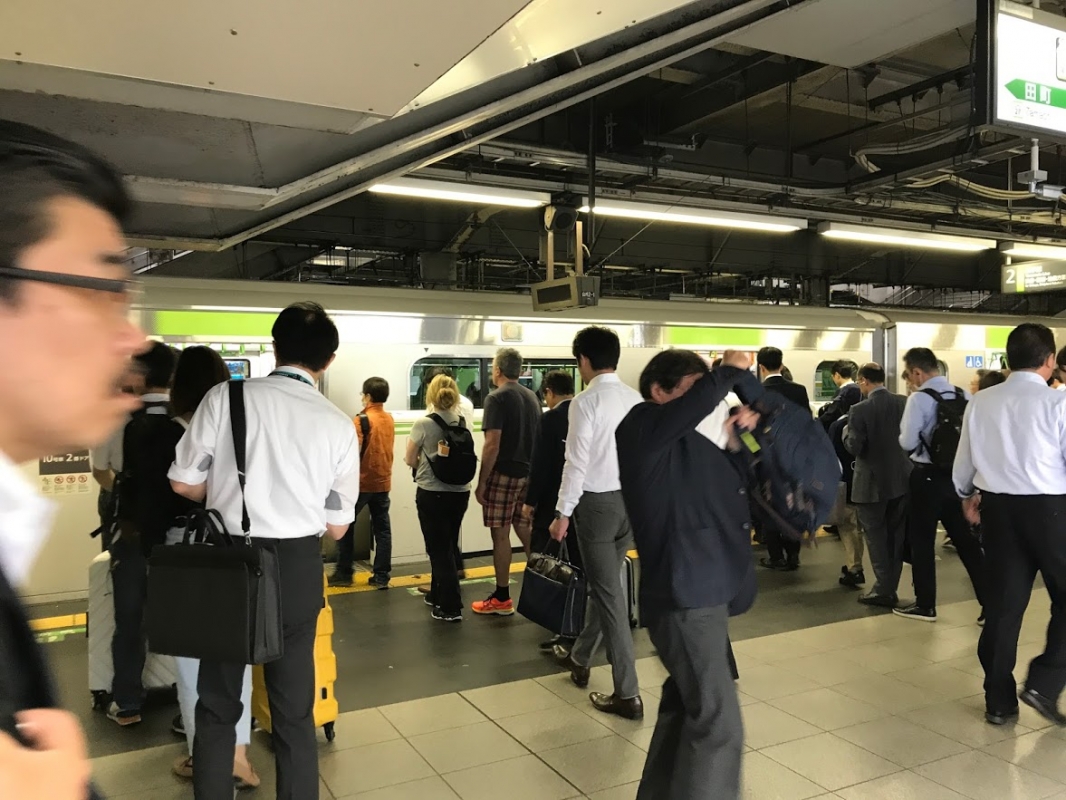 People lining up to enter a train, between each green line on the floor is exactly where the door will be when the train stops. 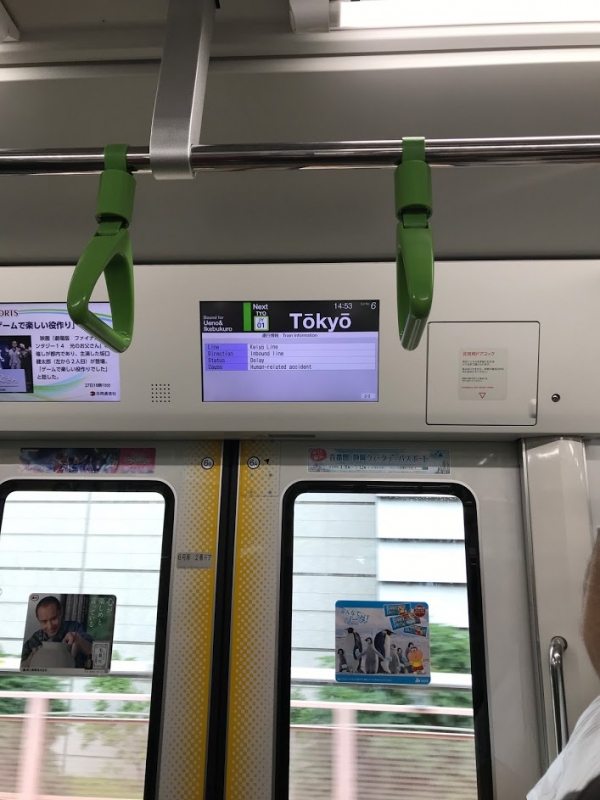 Sign on the display screen in the train informing passengers of a delay of another transit line. 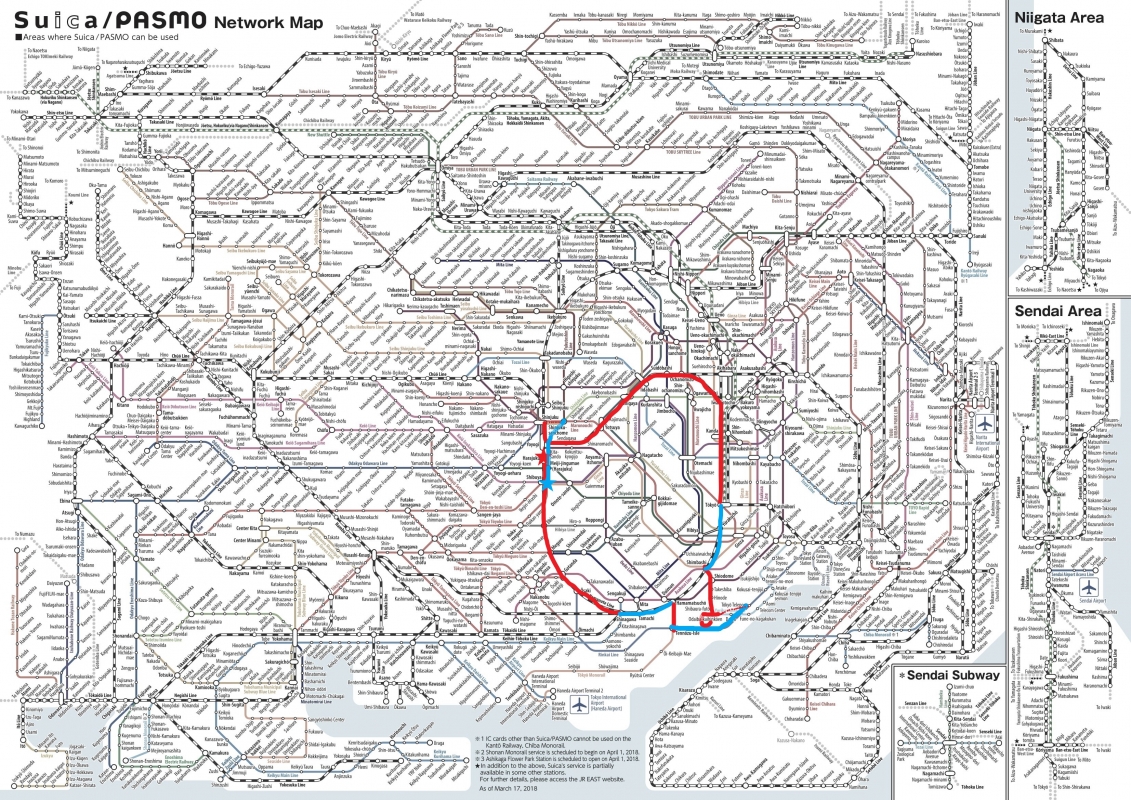 A map of the network of lines around the Tokyo mega-region, the path of the ‘Tokyo Transit Tour’ is highlighted with the red and blue lines. (Network map taken from JR East website)