Cities to Suburbs to Small Towns: Diversity in Sustainability

Japan is known as one of the most homogenous nations in the modern world, but that is not to say that they have complete equality nor homogeneity across prefect boundaries. With each unique prefecture culture comes a unique perspective on sustainability, and going from the middle of the world’s largest mega region to a town beginning to rebuild itself after a world-shattering disaster proves this more than anything. Environmentally speaking, of course, Fukushima, a city which experienced a nuclear disaster in 2011, faces an uphill battle- rebuilding a whole region after eight years of evacuation- but it is facing the challenge with resilience and incredible new ideas that the whole country could learn from. Despite being plagued by physical radiation alongside emotional devastation, the people are trying to be a model for renewable energy with a solar focus. Tokyo also has a unique take on environmentalism, though they do unsurprisingly have an upper hand in sustainability overall as the world’s largest megaregion and a long-standing technological hub. One thing that I found very impressive was Tokyo’s ability to be as populated and large as it is and yet still manage to incorporate nature in their urban lifestyle. It was not uncommon to see rooftop gardens or architecture which involved some green element; even some of the trains and public boards had the UN Sustainable Development Goals posted. 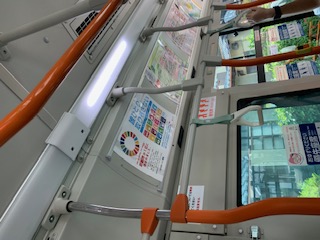 While this concrete/nature combination was relatively exclusive to Tokyo, however, general respect for nature was not, as everywhere we visit is filled with parks and natural landscape at every turn.

Economically speaking, too, Fukushima is currently in a serious rut, as most of the people who have moved back thus far are above the age of sixty. Tokyo is privileged to be the capital and have the most draw for foreign investors and workers, a huge advantage as the Japanese workforce diminishes. Though the population as a whole is older in Japan, their megaregion is the most likely to draw in young workers from other regions in Japan and around the world, so it is more fiscally sustainable as a general rule. That said, however, it is worth noting that Tokyo's privilege has not been without damage to others. In fact, the nuclear plants which exploded in Fukushima actually created energy for Tokyo, keeping little of the benefit for itself and experiencing near obliteration to keep the megaregion running.

Having said this regarding Fukushima, the extent to which they have already rebuilt their town a short eight years post nuclear breakdown is beyond admirable, and their resilience should stand as a model for the whole world to follow. Though eight years is not long in the grand scheme of life, it felt like a lifetime for residents forced to uproot their lives after a disaster which should not have involved them in the first place. However, rather than giving up on their home and moving on or accepting the injustices they faced, the people immediately began rebuilding their town to a point where a new government building has already been established and residents, though few, are already moving back. Former residents have rejected all statements that Fukushima will never be as good as it once was and have bounced back to make it better and more environmentally sustainable than ever; even our own tour guide designed solar panels which now supply a large portion of the city’s power. 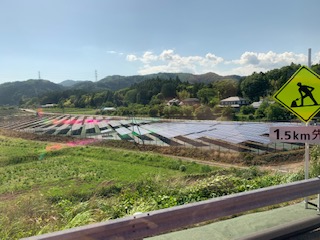 Even beyond the physical rebuilding of the region, there is an impressive movement to rebuild the social environment. We visited a high school in the surrounding area and heard about projects that students there had been working on, one of which was a café designed to be an open area for people to come exchange ideas with dishes inspired by Fukushima’s best-known foods. 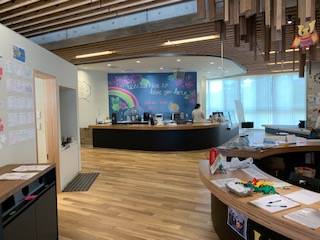 The people of Fukushima are incredibly welcoming to outsiders: the mayor himself thanked us for visiting, and our tour guide’s father, one of the residents already back in Fukushima, allowed us to come talk to him about the disaster. Their desire to share their story with anyone who will listen will likely prove as a great strength in the future, as Fukushima tries to break tensions between regions and encourage all people to visit their rapidly developing area.