To Burn or Bury? Waste Disposal in Japan and America

One very obvious societal difference between Japan and the United States is each country’s unique waste management system. It is clear that both nations differ not only in garbage disposal practices, but also in their attitudes towards waste generation itself. After spending the past month in various cities across Japan, I’ve experienced the Japanese methods firsthand and recently got the opportunity to learn more thoroughly about their origins in lecture. 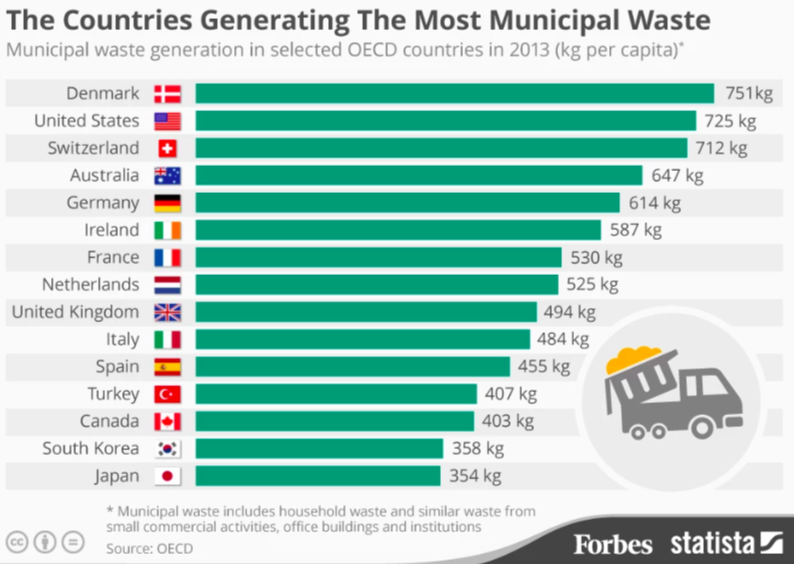 Municipal solid waste (MSW) is defined by the EPA as trash from consumers including plastic, food waste, furniture, and most other non-toxic public waste. The MSW collection processes are relatively similar between the two countries, with both depending heavily on collection and transport vehicles. It is the fate of the waste once it has been picked up that is most stark difference. Japan incinerates their MSW before transporting the remnants to sanitary landfills, while the United States primarily exports its waste directly landfills and dumping sites. Japan operates over 1,200 incineration sites, while the US has less than 70. Instead, the US relies on landfills to dispose of hundreds of millions of tons of MSW each year. Food and plastics accounted for about 41% of these landfilled materials in 2015, while the Japanese combust opt to similar food waste and recycle many of the same high-grade plastics. 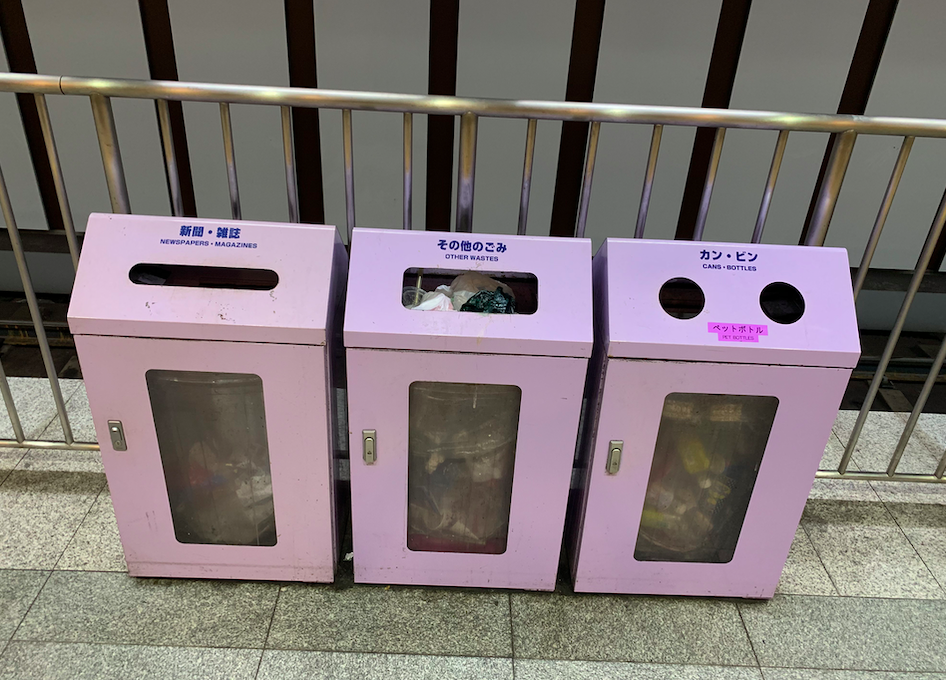 Waste bins at the train station separated by combustibles, papers, and plastics

Moreover, Japan has a much more stringent MSW preparation process prior to transport than that of the US. Recycling and combustibles are sorted with intense guidelines and must be disposed of at specific locations at fixed times. For example, our dorm room has three different types of MSW disposal, each with a special type of bag and strict pickup hours. The United States, on the other hand, is much more lenient with waste collection rules. Trash is not separated prior to collection and larger items can be left on the curb for pickup. Recycling practices are often times poorly explained, which can result in batches of municipal recycling becoming contaminated and sent to the landfill along with the rest of the household waste. For these reasons, Japan’s MSW management practices are more efficient and resourceful than the United States’. 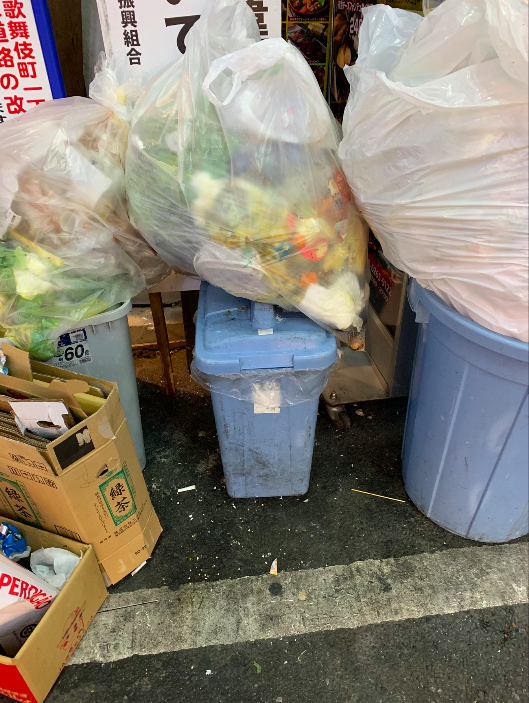 Trash just before pickup outside a Tokyo restaurant separated by cardboards, plastics, and food waste

Another very pronounced difference between the two nation’s waste management systems is the availability of public trashcans and recycling containers. The US has accessible trashcans in nearly all public spaces and a growing number of community recycling bins. In Japan, however, public waste and recycling receptacles are extremely hard to locate. There are usually PET plastic and aluminum recycling bins stationed by vending machines or tiny trashcans outside food stalls, but their scarcity often times leads to people carrying their garbage with them until they return home. 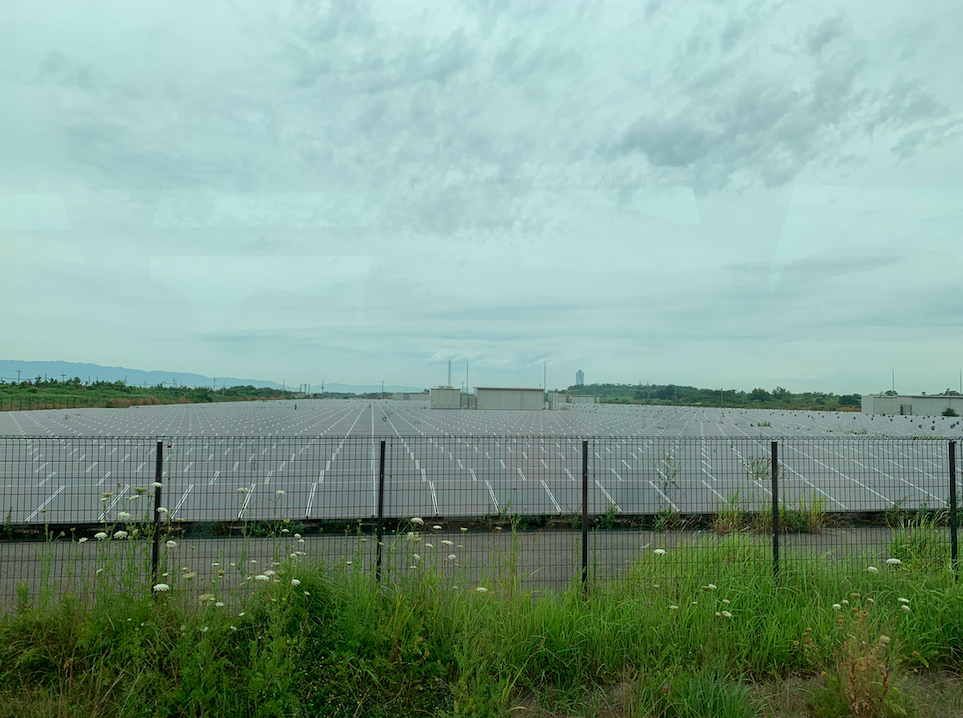 Landfill we visited that has been repurposed for solar energy generation

Because the Japanese are required to separate their garbage and recycling prior to disposal, they are forced to be more aware of the waste they produce each day. Maintaining this consciousness encourages people to generate less waste, both for convenience sake and for environmental reasons. In the United States, the ease of MSW disposal creates an “out of sight, out of mind” mentality. The ability to constantly discard food or consumer waste removes any feeling of personal accountability. The EPA reports that the per capita MSW generation in the US was about 4.48 pounds per person (closer to 6 pounds in Georgia), while the average Japanese citizen produces closer to 2 pounds daily. Perhaps if the US could alter their MSW disposal practices to mirror the Japanese and promote public consciousness, we could see a decrease in waste generation and consequent increase in the sustainability of our waste infrastructure.