After two days in the program, I’ve noticed that dedicated bike infrastructure is more prevalent in the Netherlands. It feels as if the entire town of Delft has a connected bike network that is widely used and people of all ages cycle. Paths are shared with both pedestrians and vehicles at times without much conflict or stress. In my experiences so far, traveling by bicycle has been pleasant, effective, and safe in Delft.

The Dutch approach to cycling infrastructure is more cognizant of the safety of cyclists. Separation from motor vehicles is present where possible, and road sharing only occurs on low traffic and slow-moving streets. Traffic calming measures are taken in neighborhoods so that cars are forced to travel slowly and check their surroundings. Cyclists also move through signalized intersections on their own. In the United States, bikes often lack separation from cars and travel alongside fast-moving roads. Traffic calming measures are rare and cyclists are forced to travel through signalized intersections alongside turning cars. These differences in design are reason for the safe-nature of Dutch cycling compared to that of the United States. Figure 1 below shows a cycle track that is incorporated into a roundabout with priority over vehicles. 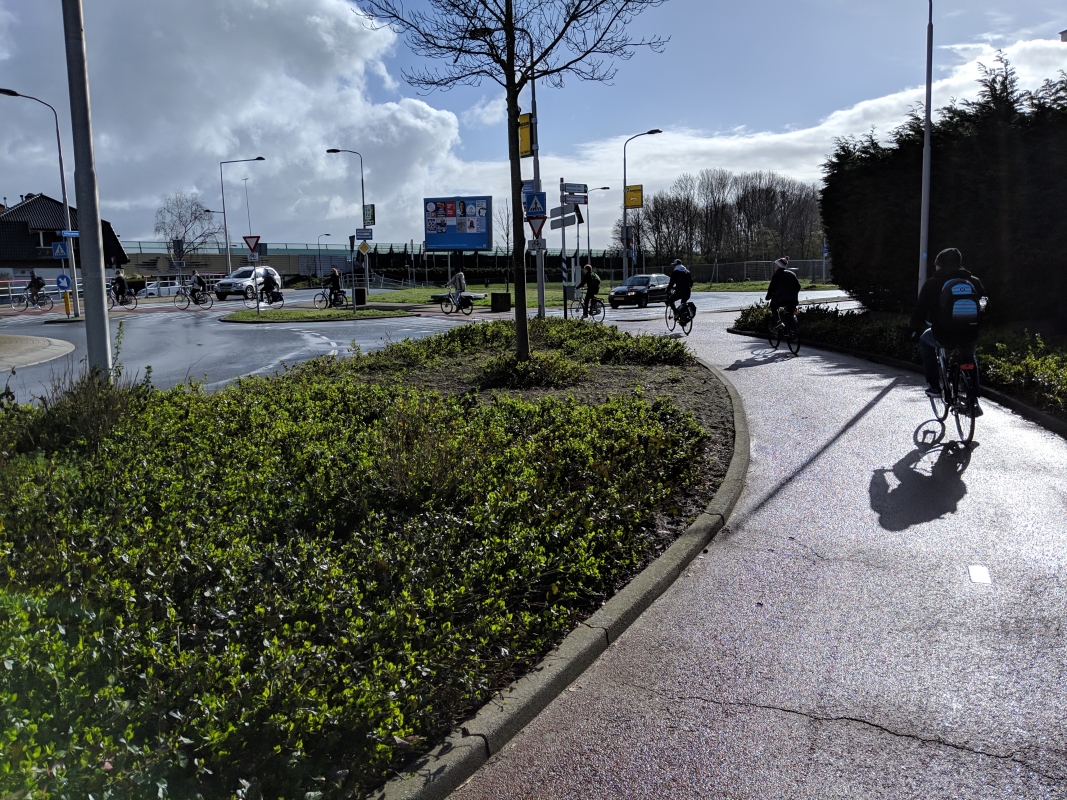 In most scenarios, cyclists are the priority. Dedicated two-way paths ensure that cyclists can travel among other bikes at realistic speeds, and road sharing only occurs where vehicles are required to travel slowly. Figure 2 below shows a shared road with a speed limit of ten kilometers per hour. The geometry of this traffic-calmed street also forces vehicles to abide by the speed limit. 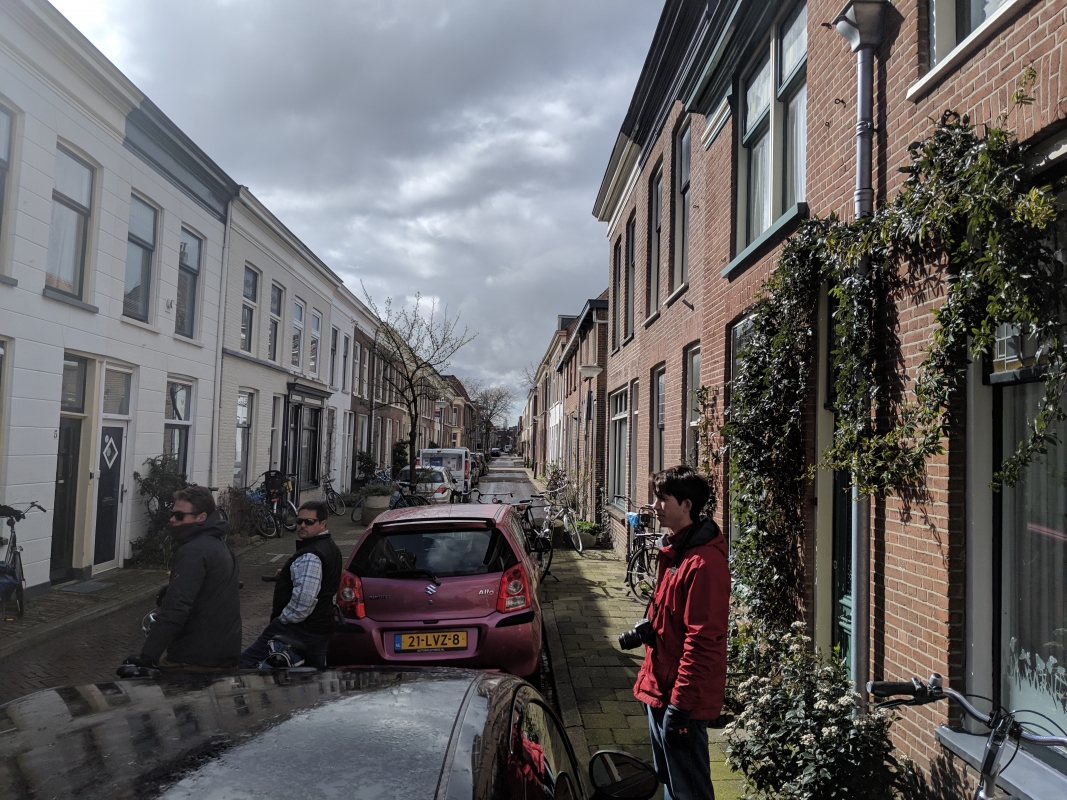 When there isn’t enough space for a two-way road and separated cycle track, advisory roads exist. These roads are shared by both vehicles and bikes, but the painting of the roads prioritize cyclists. When vehicles need to pass, they can enter unused cycle lanes to do so. Even pedestrians give priority to bikes, making their use more effective. Figure 3 below shows a very thin advisory road. 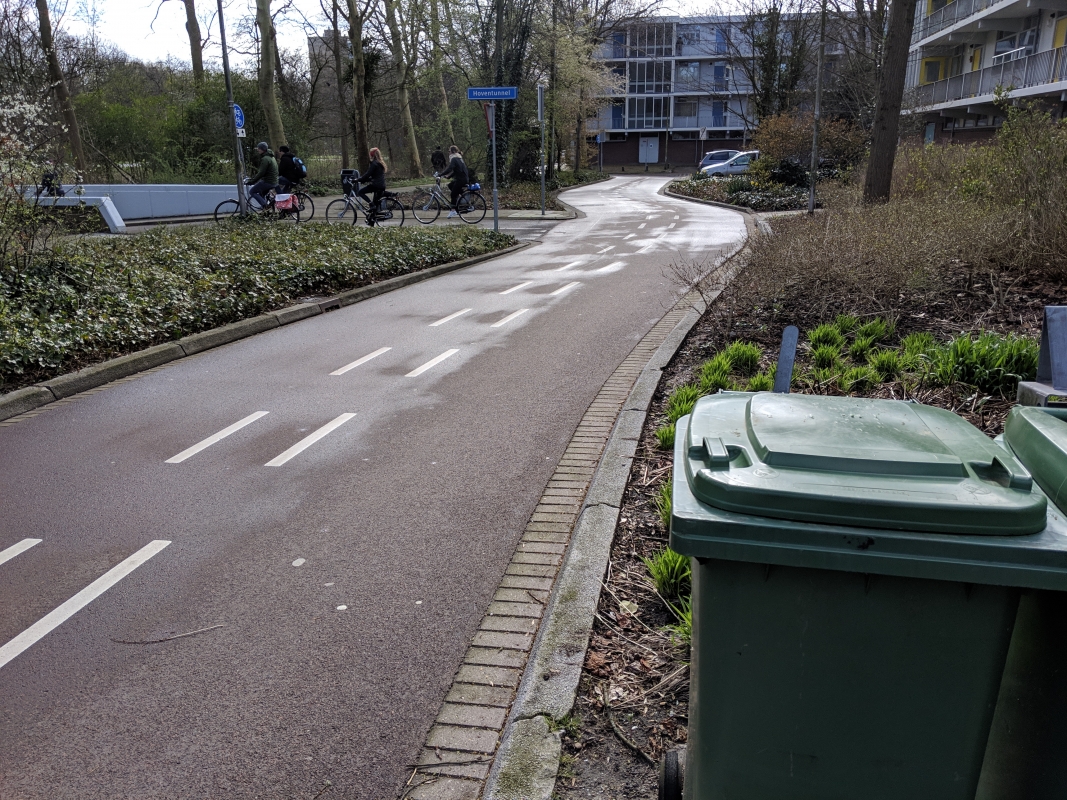 Traveling by bicycle is the norm in the Netherlands. People of all ages, genders, and classes cycle. Pedestrians look for cyclists when crossing dedicated paths, and think nothing of navigating around cyclists. And when both modes share a space, cars are willing to drive slowly until an opportunity arises to pass (advisory lanes, shared lanes, low traffic and slow roads).

Bike shops are prevalent, and bike parking facilities are widely used. And in the Netherlands, developing a complete cycling network is treated as a legitimate priority benefiting the whole of society, and not just a way to quell an interest group’s call to action. This positive outlook on the development of cycling infrastructure creates a feedback loop in favor of more cycling.