Days 1 and 2:
Nonstop would be an understatement for how this day went. We left our airport in China at 6am to catch our flight to Tokyo. We arrived at Nairita airport at 3pm and only got to Tokyo at 6pm. After we dropped our bags off at the hotel it was 7pm — our day would finally begin. We decided to embark on a journey to climb Mt. Fuji in time to be at the top for sunrise. However, we hadn’t eaten the entire day and decided to stop at the most reliable food source of them all. McDonalds. After a quick happy meal, we left for Fuji.

Kieron had done quite a bit of research prior to the trip on how to get to Fuji. None of the paths were ideal but we ended up going with 3 trains and a taxi cab that put us right in the bottom of the 5th station of the mountain. Stations were small rest area points for hikers to recuperate before progressing further.  The hike was a 6-hour journey so we knew that we had to start immediately as the sunrise was at 5am.

We got off the cab at 1am and the journey began. I had been suffering from a fever and food poisoning and almost immediately fell back from the rest of the guys. We decided that since we all had our own paces we would just aim to meet up at the top. The terrain seemed to change its mind on how to make the ascent difficult every kilometer. There were switchbacks – type of walkway that goes back and forth in mind numbing fashion that makes it seem like no progress is being made. There were also large rocks that we had to quite literally get on all fours to get across and even forest understory to cut through. Yet were all able to watch the sunrise at 5am and even though we weren't together then, each view had its own beauty. At 8 am we all stood proudly side by side grinning from ear to ear at the summit. 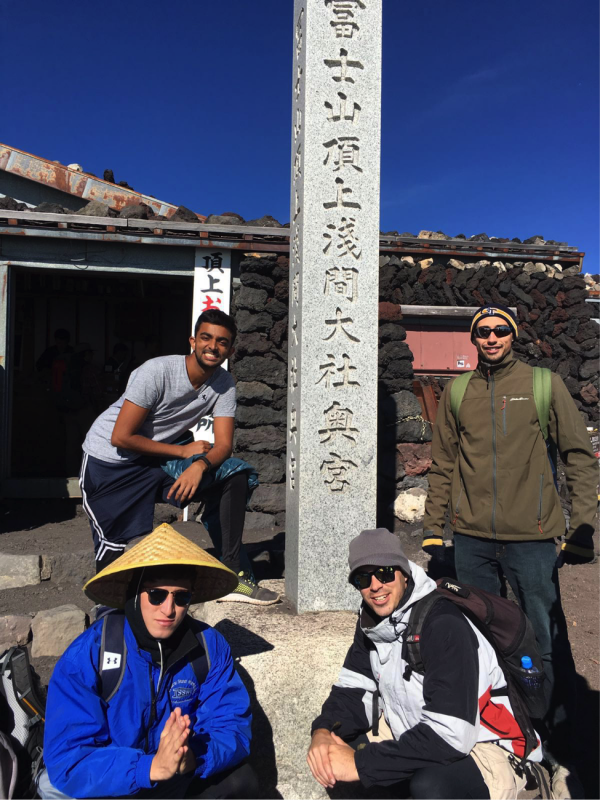 At this point we were dehydrated, had altitude sickness, and were incredibly sore from the ascent. After an hour of taking pictures and resting, we were ready to go home. Little did we know what laid ahead of us for the descent. There were 100 switch backs with rocks that collapsed at the slightest touch. It wasn't the difficulty of traversing the switchback that made this hard. It was the sheer repeated was of the task. Imagine completing a very difficult task only to see that a another variation has presented itself to you – again and again. With that being said, it was super cool to walk through clouds on our way journey down. 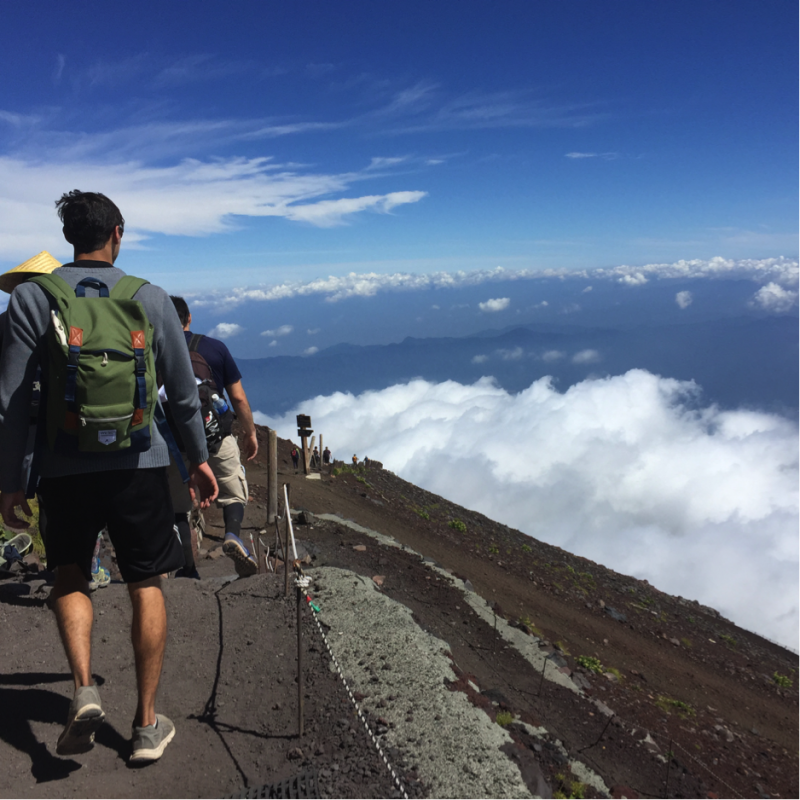 It took us about two and a half hours to get through these as we were all suffering from weak knees and severe headaches. We then had a short 3km walk – a period of 20 minutes that has never felt longer in my lifetime get back to the car and bus loading tea. After a bus and 3 train rides where we fell asleep I desirably – we finally got back to Tokyo. By the time we got dinner and got back to our room it was 6pm. 36 hours had passed in this journey with not a single hour of sleep. One of the most difficult experiences any of us have been through but definitely one of the most fulfilling experiences.

Day 3:
Today we traveled to Sendai. Joining our group was Professor Satoshi, a professor at the Port and Airport Research Institute and Seth, a PhD candidate at GT. We traveled to areas where the 2011 Tsunami had caused major damage. To get Sendai we took a 2 hour long high speed train and then rented a large van to go around the area. It was fascinating to see the different structures that were able to withstand the water damage as well as those that had completely collapsed. Dr. Frost had shown has pictures he had taken 2 years ago and we were able to see the progress in the area since then.

However, we soon went from being fascinated to heart broken. In one of our stops, we happened to come by what I can best describe as a makeshift mini-mall strip. We soon found out that this area used to contain a thriving town with many markets. One of the shops’ owners, an elderly woman, came down and gave us her account of the tsunami. She had pictures before, during, and after the disaster. Even through her retelling, she never lost her positive attitude. She always had a large smile and it was inspiring to see someone at her age stay so strong.

On the way back we stopped by a ramen shop and had a famous piping hot bowl of hot ramen. 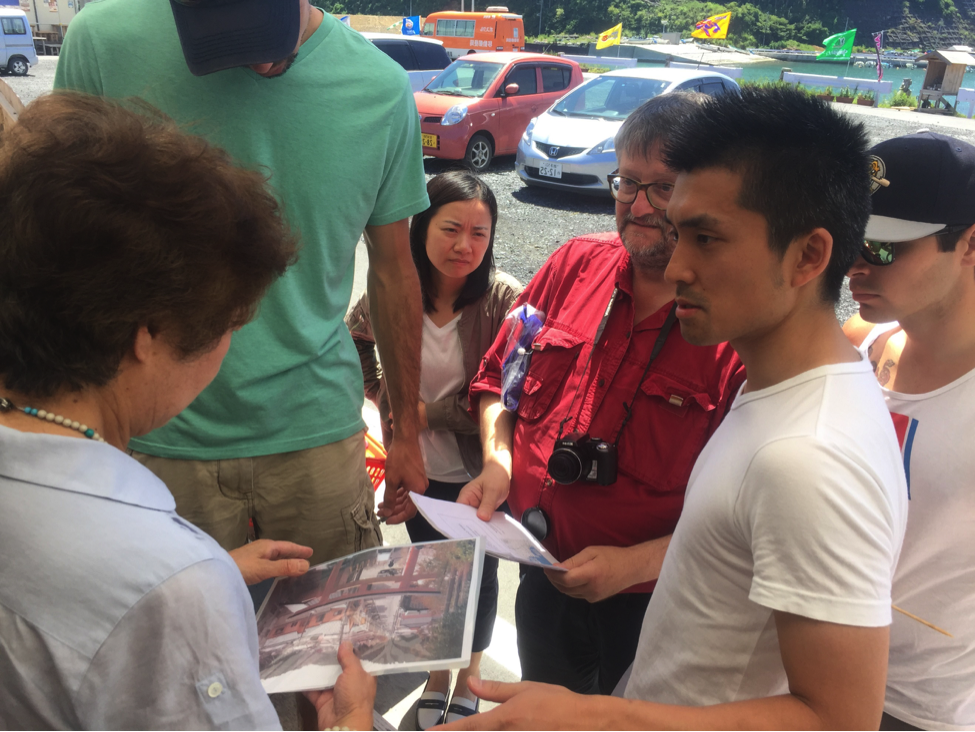 Day 4:
Hiroshima was the last part of trip in Japan. We knew it would be a hard sight to swallow but all of us looked forward to learning more about the bombing from a perspective we had never seen before – the Japanese side.

After 3 long train rides, we finally arrived in Hiroshima. At first sight, the town is just another tourist location. You have your Pradas, Tiffanys, and food carts at every corner. However, a few bus stops into the city, the Hiroshima memorial comes into play. Surrounded by a river, this memorial is best described a park with many monuments. The whole area is tastefully created and the sense of “tourism” slips away and is instead replaced by a feeling of peace and respect.  The whole park preaches peace and removal of nuclear weapons.

Inside this park is a museum that housed a lot of the artifacts from the bombing. It told the shocking stories of the people before, during, and after the fact. There was even a pledge that people could sign near the exit of the museum where people could pledge against the usage of nuclear deterrents. 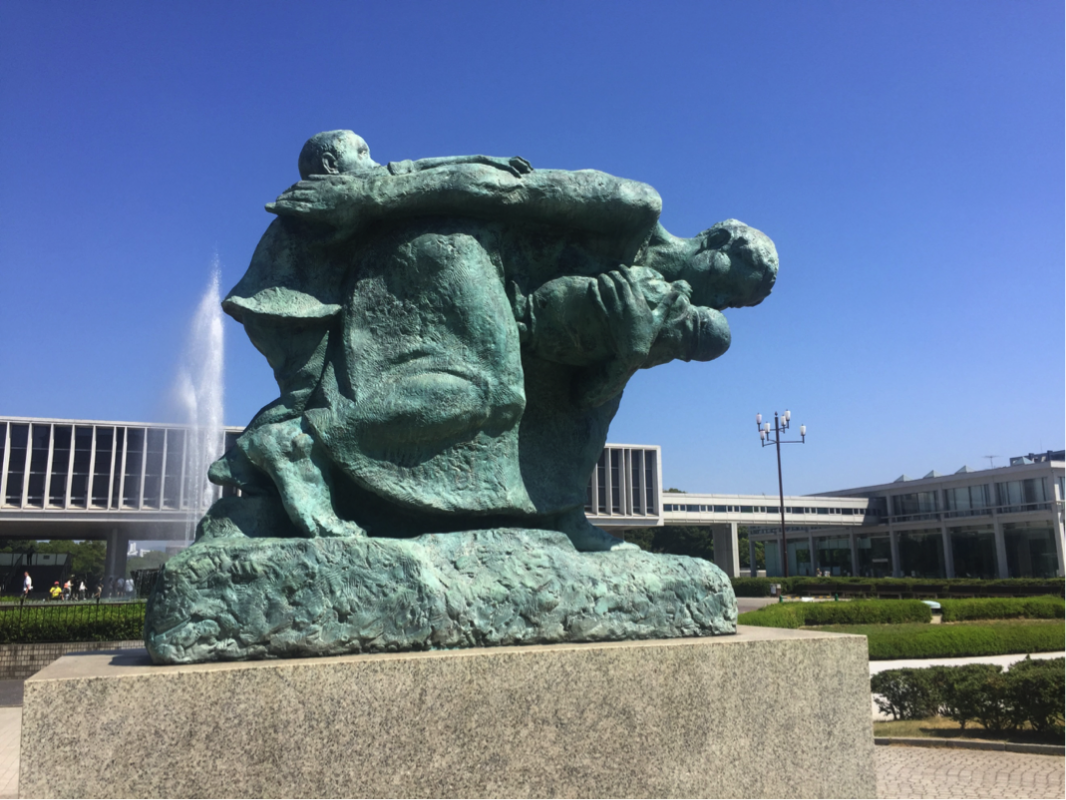