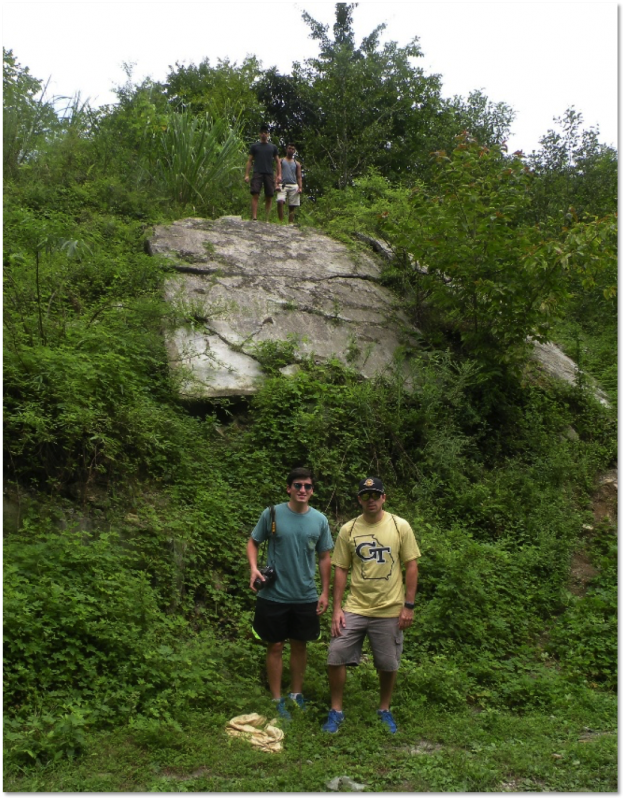 The morning of the second day in Chengdu, we ate breakfast provided at the hotel. The breakfast was traditional Chinese with an international influence. It included an assortment of vegetables, rice, dumplings, noodles, fruit, breads, and eggs.

Following breakfast we were met by Dr. Xu as we climbed into three chauffeured SUV’s that were kindly provided by Chengdu U.T. On the way to our destination I noticed that driving on the highways of Sichuan was just as exhilarating as it was in Beijing. We even gave our driver the nickname of “Jason” as in the actor Jason Statham from the movie The Transporter, because of his skills and daring attitude behind the wheel.

Our first destination of reconnaissance was Old Beichuan, a city that was devastated by the 2008 Wenchuan earthquake, corresponding landslides, and later on by severe flooding during the rainy season. After the initial disaster event, it was decided by the Chinese government that the ruins of Old Beichuan were to be preserved and converted into a memorial for those who had died. The city now stands as a stark reminder of the ability of nature to influence structures built by humans, and the importance of designing those structures to an appropriate factor of safety. 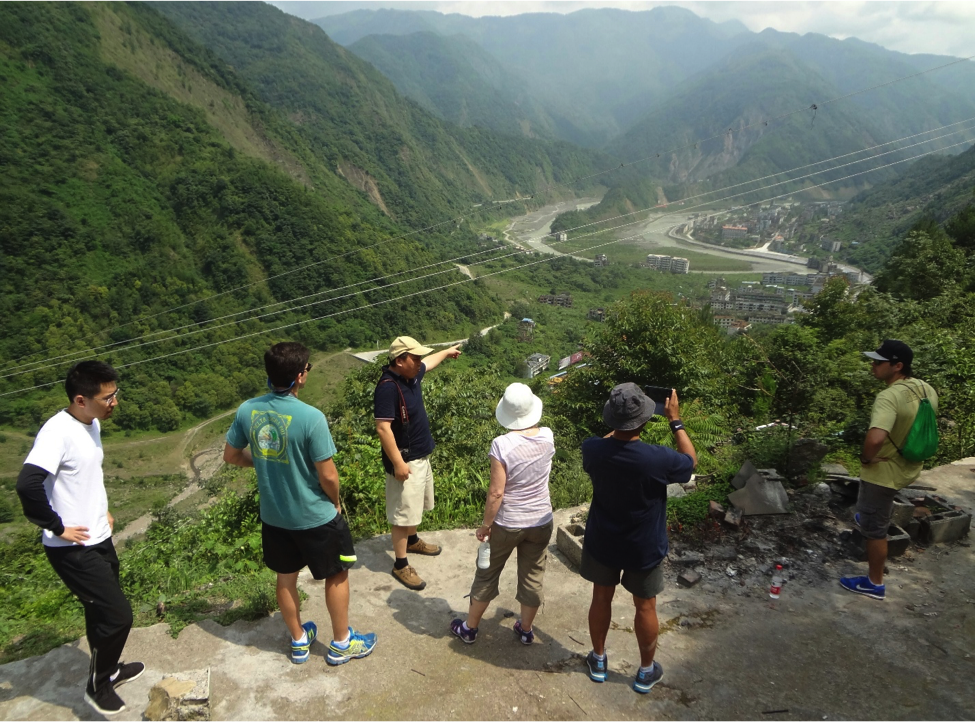 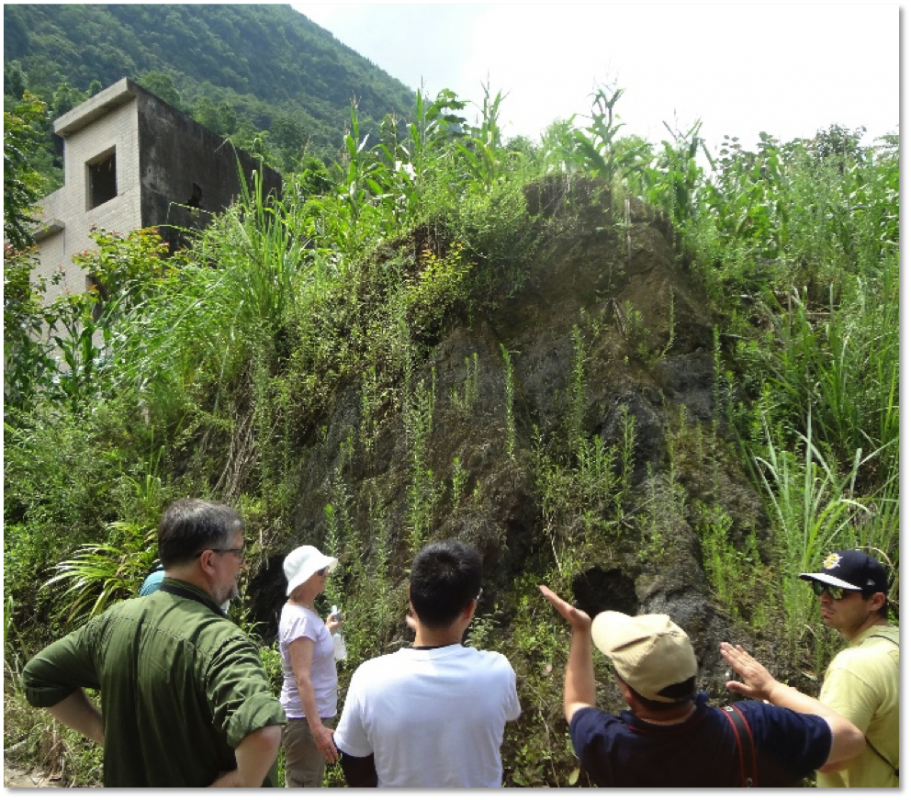 Dr. Xu motions with his hands to demonstrate how parts of the earth along the Longmenshan Fault were thrust diagonally upward during the earthquake. Above Right: Team members standing atop and below a part of earth that was vertically displaced by nine meters. 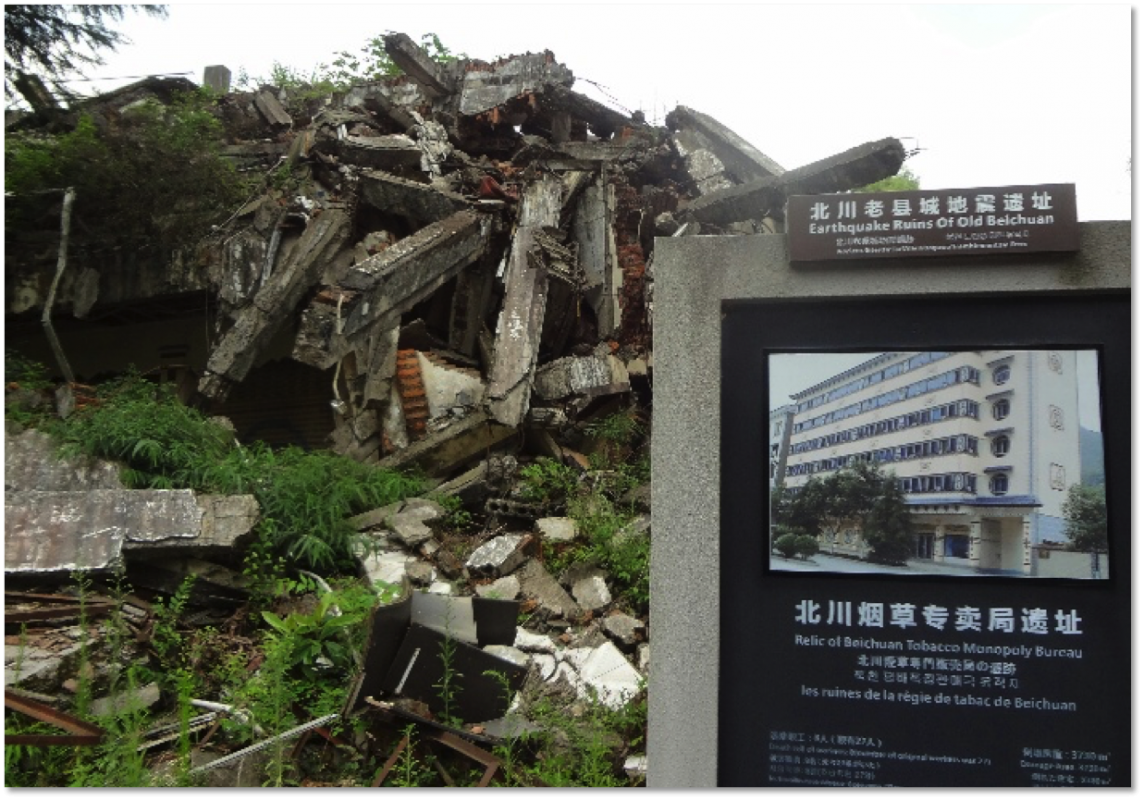 Collapsed remnants in Old Beichuan next to a photo of what the building looked like prior to the earthquake. 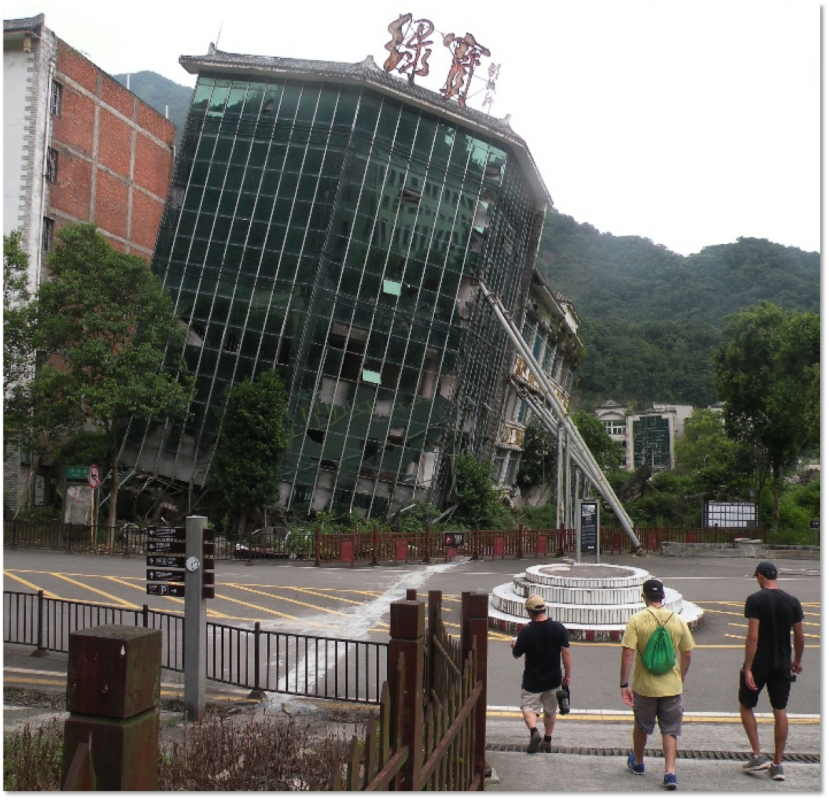 A building in Old Beichuan tilting heavily to one side that performed well structurally, but whose base failed during strong ground motion. 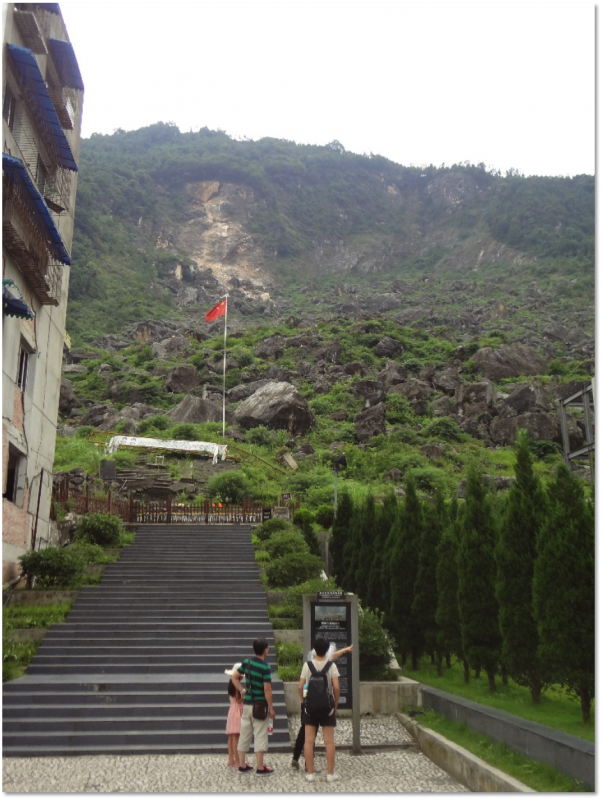 A boulder field deposited by a massive landslide with scarring still visible on the mountainside. Beneath lies one of Old Beichuan’s destroyed middle schools where over 800 teachers and students lost their lives. 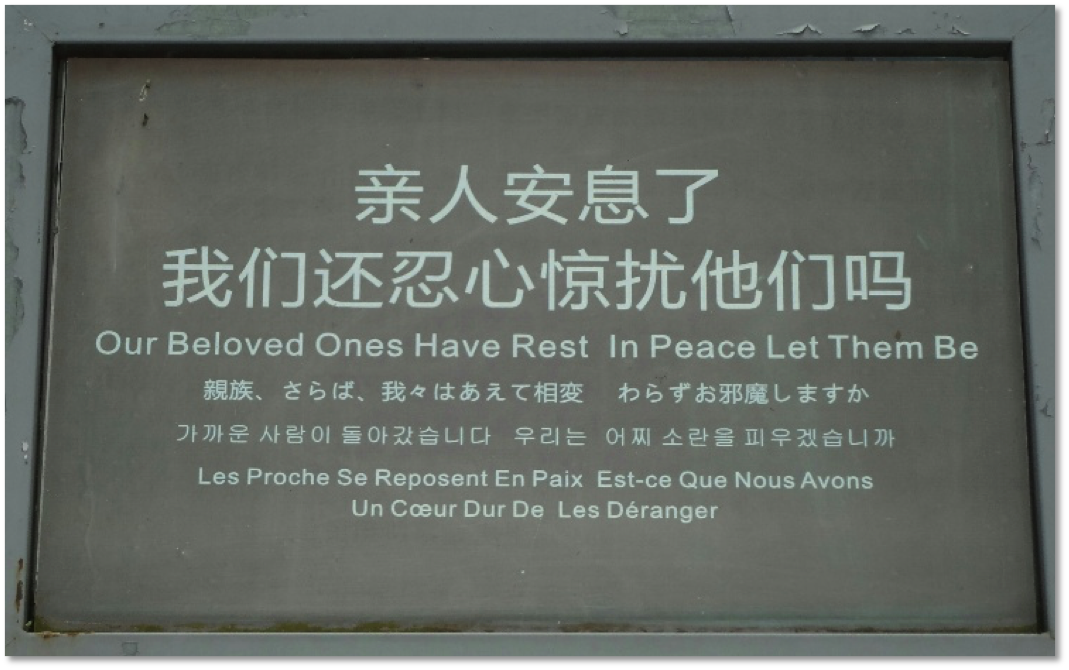 A memorial plaque to the victims of the disaster. Approximately half of the citizens of Old Beichuan died due to the earthquake. 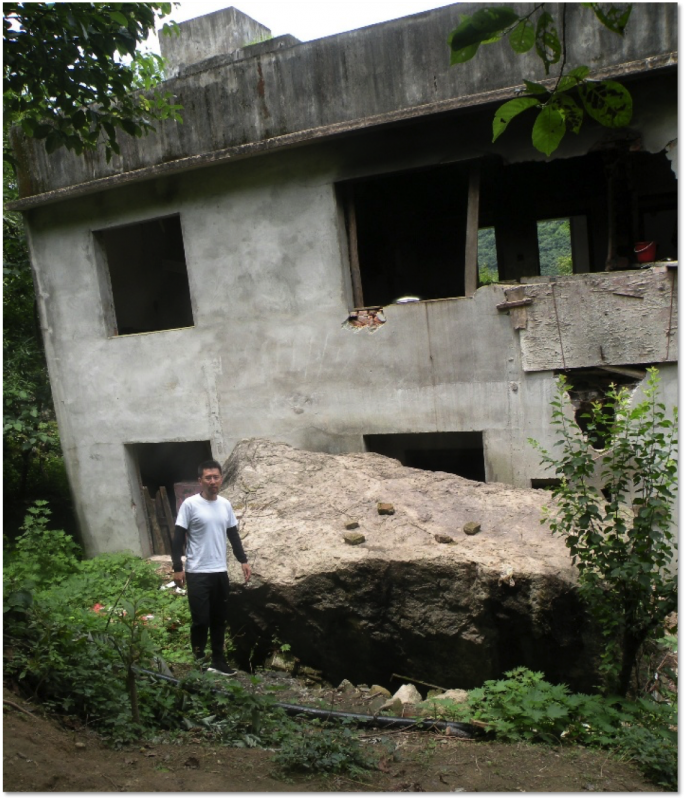 PhD student and former Yellow Jacket Fang Zhou (aka Albert) stands next to a boulder that was projected from the mountainside during the earthquake. 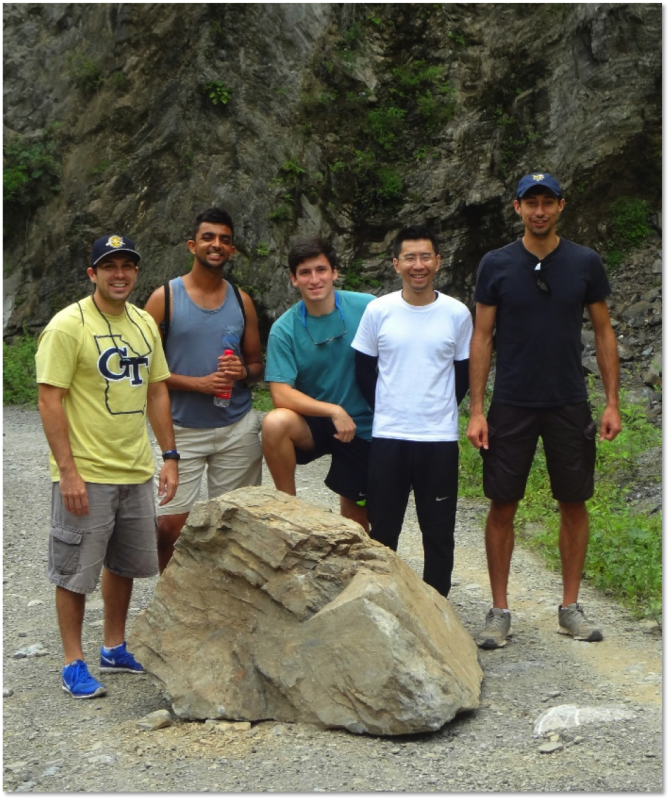 The GT recon team stands next to a newly deposited boulder that blocked a small mountain road on the way to the Tianjiangshan quake lake. This made the route impassable for our SUVs, and we had to turn back before the rains created an increased risk for falling rocks.

Following our reconnaissance in Old Beichuan, we were treated to a Sichuan style lunch at the Disaster Prevention Research Center nearby. One particularly tasty dish was sardines cooked with vegetables in mild Sichuan spices.

After viewing the disaster site of Old Beichuan the team travelled to the city of New Beichuan. New Beichuan was constructed in the years after the 2008 Wenchuan earthquake to help the survivors from Old Beichuan rebuild their lives. The city site was chosen to be in a much safer area outside of the Longmenshan Mountains on the flat Sichuan Basin. Its construction was paid for using charitable donations and central government funding. 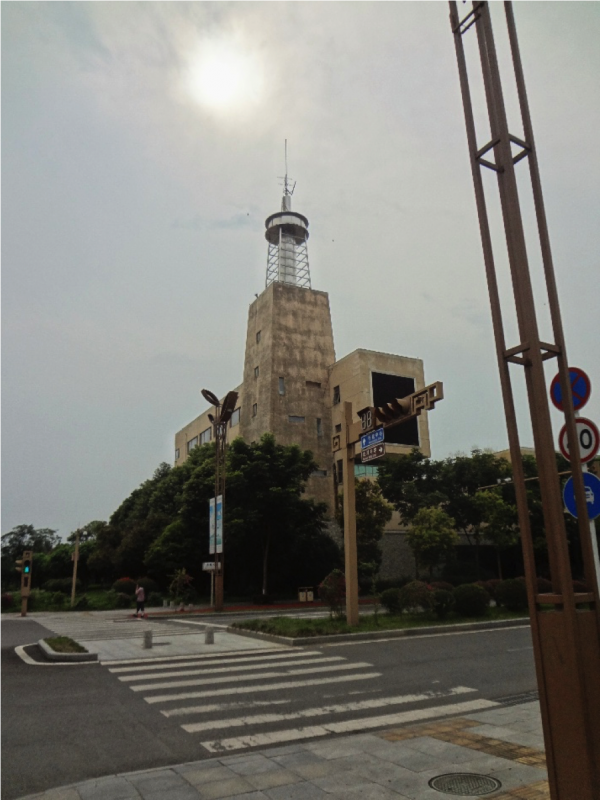 A building in New Beichuan modeled after the watchtower in Old Beichuan.

Our final reconnaissance spot of the day was the Wenjia Gulley debris flow mitigation system. Designed by Dr. Xu, the mitigation system serves dual purposes: to guide rainwater coming off the mountains into a man-made channel away from structures, and to halt the movement of any deposits larger than 1.5 ft in diameter. This system is cleaned of debris at the end of every rainy season in preparation for the next year. 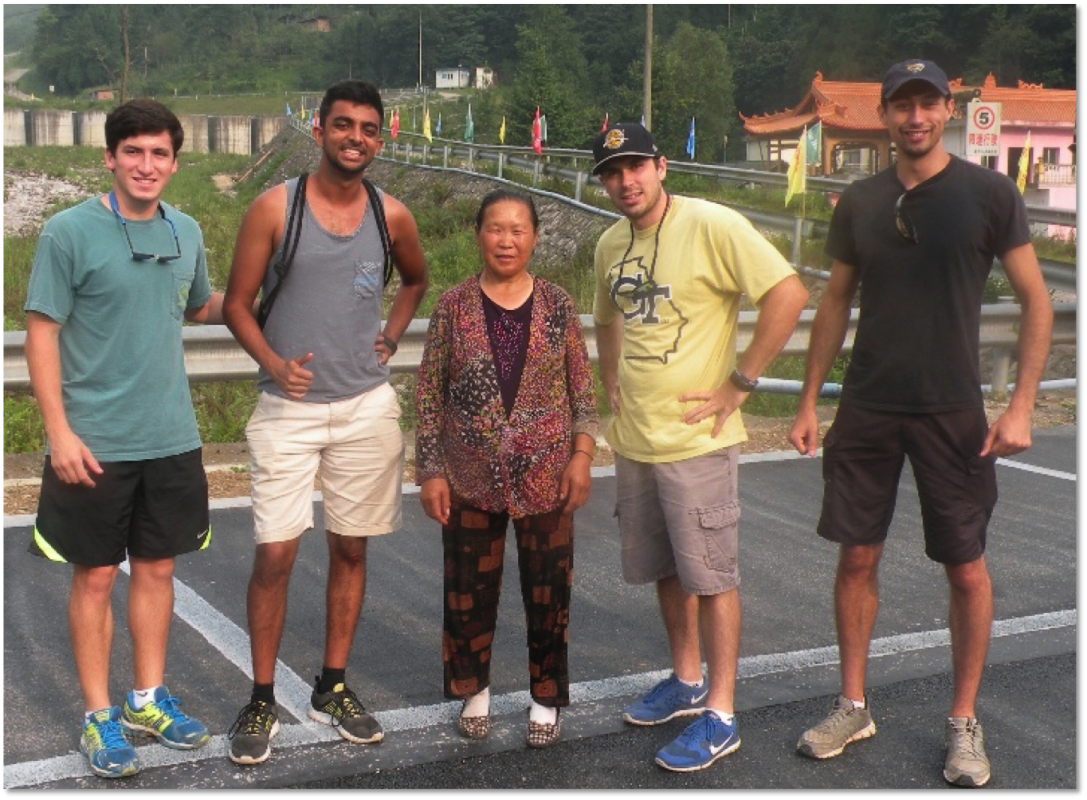 The GT recon team with a local woman employed as gatekeeper of the Wenjia Gulley. 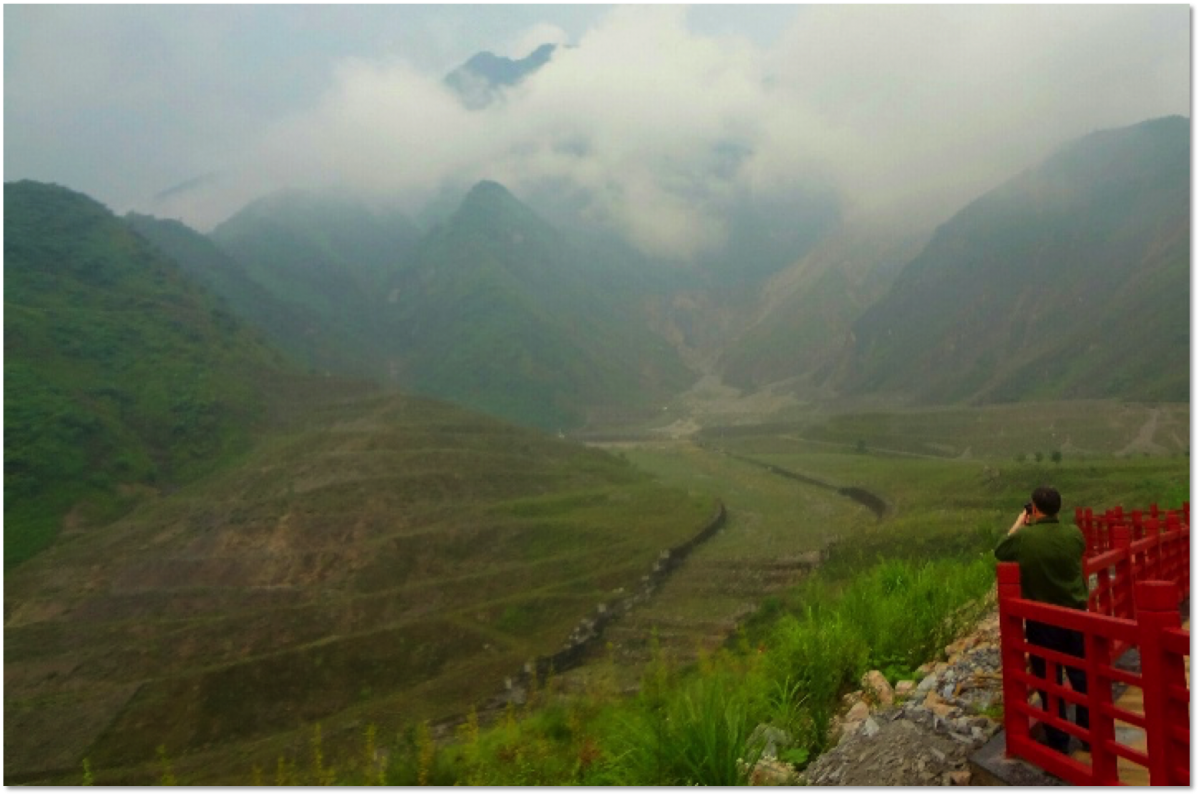 Dr. Frost in front of the water flow control portion of the mitigation system 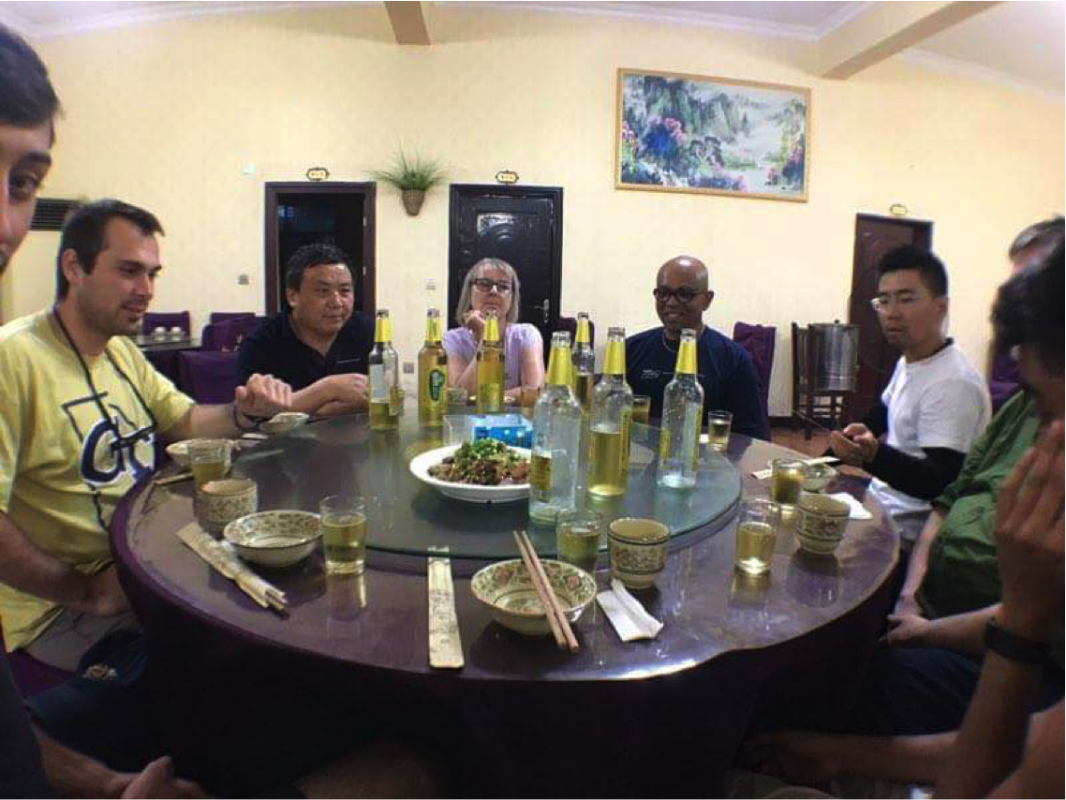 To end the day, we ate dinner at a local Chinese restaurant out in the country on the side of the road. The food was delicious. However, it lead to some gastrointestinal disturbances  for many of our team members over the next several days.