First Impressions of the Netherlands: OMG. This is a cyclist’s paradise.

(I wrote this post in a note book while sitting in the square outside of our hotel, in Delft. I was in love with the city and I wanted to spend all my time watch people and biking around. I found it challenging to sit in front of my computer to write, so I wrote some of my blog post the old fashioned way - with pen and paper. I’m just getting to typing these blogs up and posting them on the web, so I apologize if some are out of order.)

I’ve been on sensory overload since we cleared customs in the Netherlands. I feel like a photo maniac. Only two full days here and I’ve taken nearly five hundred pictures and videos. I want to absorb every detail, from the design of protected intersections to the layout of land uses on a regional scale. Undoubtedly, this is the most well thought out transportation system I have experienced.

Bicycle infrastructure investments like this does not just happen. I believe the culture has to support it. My intention over the next two weeks is to reflect on what aspects of Dutch culture create enjoyable places to bike. So far, I have observed two overarching mentalities that I believe contribute to a robust and comfortable bicycle network: one, the Dutch are particularly aware of climate change, and two, they are not afraid to increase vehicle delay/slow cars down. 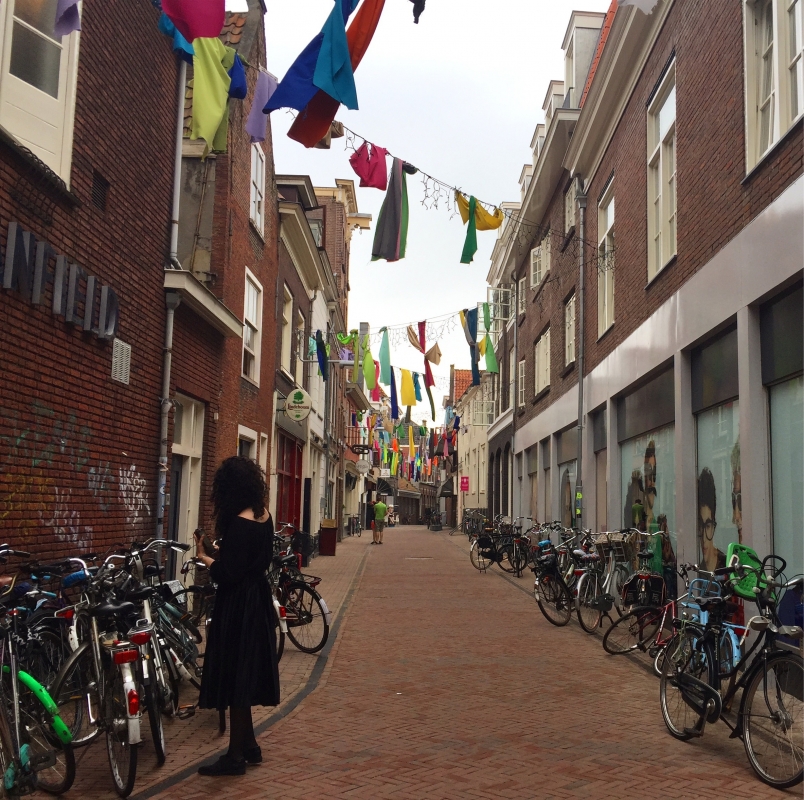 ​Photo: Side street in Delft 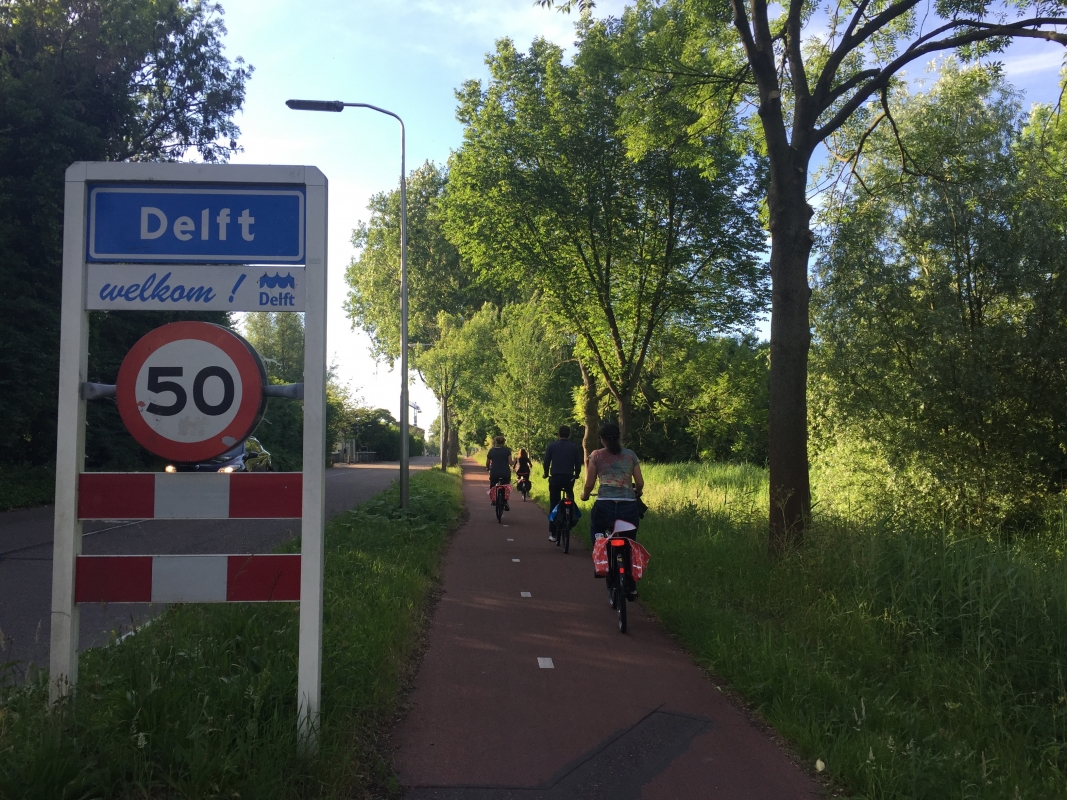 Photo: Returning to Delft from our first outing in Rotterdam.

Before coming to the Netherlands, I anticipated the abundance of bicycle infrastructure to be overwhelming, but I never expected to be taken back by the amount of water. Our home base, Delft, is located inland of the Hague and Rotterdam, yet water canals define the landscape. The majority of the Netherlands is below sea-level. The livelihood of their cities could depend on the country’s ability to pump and channel water. Current trends in sea level rise make their job much more difficult and could threaten the existence of the Netherlands. This issue can be seen from everyone’s front door. Having to confront climate change on a daily basis instills a heightened level of awareness that I believe helps build national consensus and motivates immediate action to support modes of transportation that do not release as much carbon dioxide. 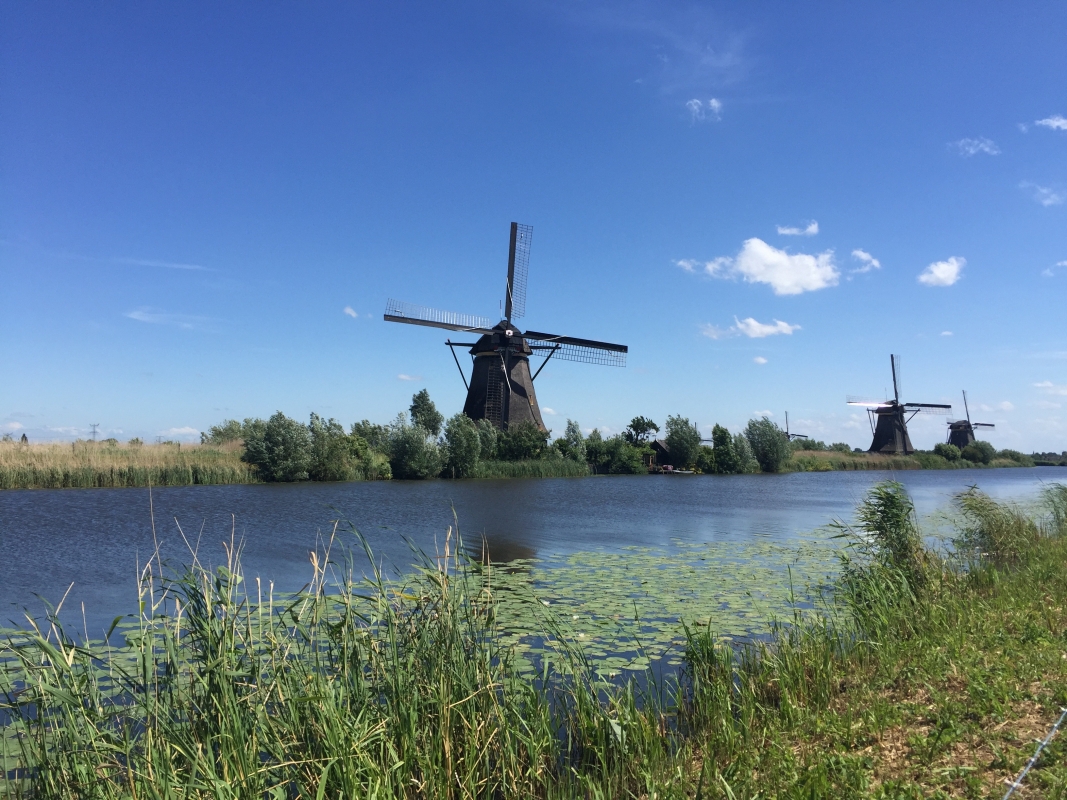 Photo: Windmills in Kinderdijk were built to pump water out of land used for agriculture. 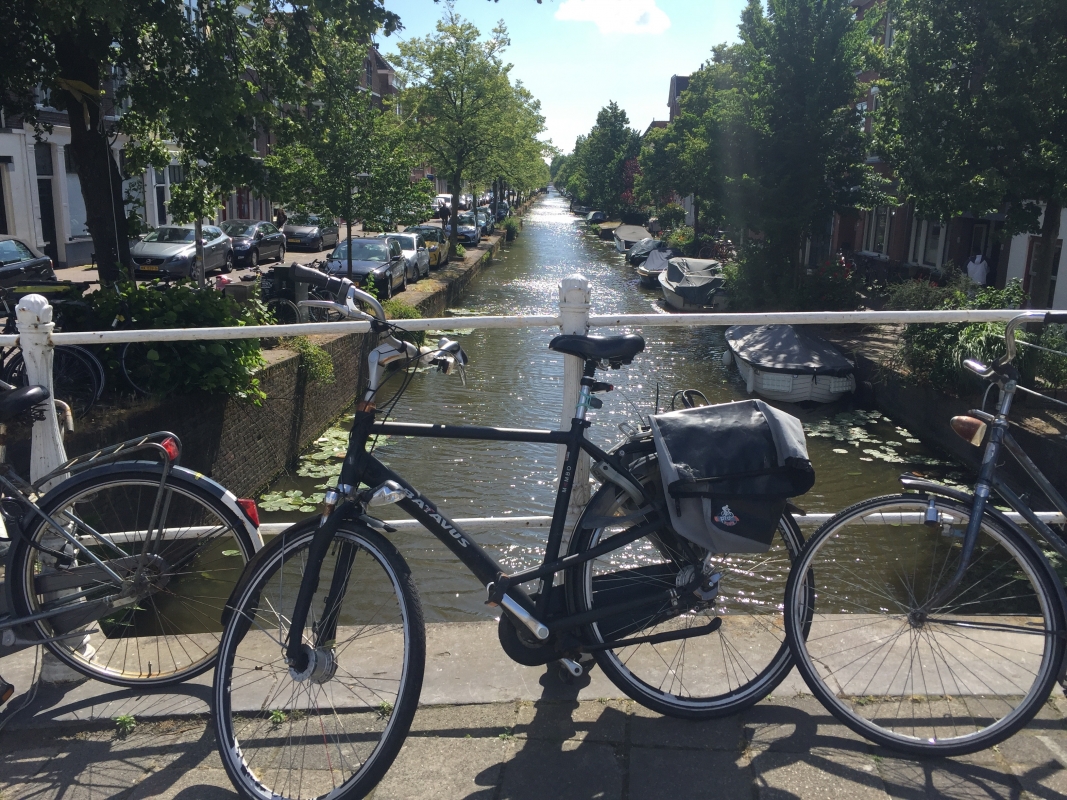 The completeness of their low stress bike network could be related to their effort to slow cars down. Not every road in the Netherlands is equipped with a separated path. Similar to the U.S., the Dutch believe that different roadway characteristics and vehicle speed limits necessitate different types of bicycle infrastructure. I am surprised to see how much of the bike network, in the Netherlands, consists of shared streets. In the U.S., local shared streets will play a critical role in completing our bike network, but too often the design allows vehicles to travel at least thirty to forty five miles per hour on local roads.  Relieving vehicle congestion and optimizing flow, usually take priority over pedestrian or cyclist comfort. On the other hand, in the Netherlands, if a street is shared, priority is given to bicyclists and the street is designed to slow cars down. On the way back from our first bike trip to Rotterdam, we made a few wrong turn, or rather just missed our turns. After backtracking a couple times, Dr. Watkins said “I’m sorry, I just get so excited by the traffic calming infrastructure.” I completely agree with her. If I was not following a group, I could spend the whole day getting distracted by all the different types of traffic calming. 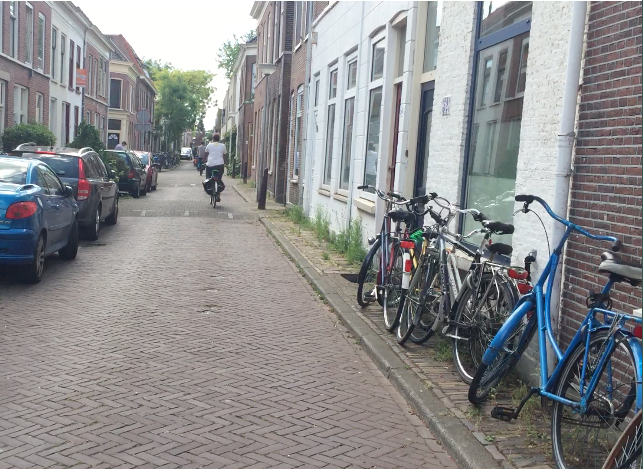 Photo: Shared street in Delft. Parking alternative from one side of the street to the other to act as chicanes and speed bumps are present near every intersection.

From what I’ve observed, the presence of water and fact the Netherlands is below sea level creates a national awareness of climate change, which in turn generates support for bicycle infrastructure. The Dutch recognize that in order to stimulate bicycle use, they need to prioritize bicycle comfort and safety when designing roadways. I’m sure moving vehicles reducing vehicle delay is important to the Dutch, but they recognize that there are some streets where vehicle should not be traveling fast and they deliberately design the roadway to slow cars down.