I’ve come to realize that the main difference between how the Dutch design their roads and how we design roads in the United States is that the Dutch truly consider every user and every destination when a design is created. They design for the users who live nearby, the kids who bike home from school, the commuter to work. They create networks so that you can bike anywhere in the city or even to the next town over. They create cohesive connections so that you can bike to a train station, park your bike, ride a train, take a tram, and then walk to your destination, all in one trip. In order to have complete bike and vehicular networks, the Dutch will give priority to bikes in some places and cars in others. They also design every street to meet its needs rather than automatically assuming that cars should be given priority, like we do in the U.S. much of the time. In the United States, we are missing many of these elements, in part because of our spread-out land use and our attachment to our cars. If we could get more people on bikes, which take up a lot less space than cars, then our traffic problems would be very different; but getting more people on bikes means making people comfortable and safe riding bikes.

Something that really stuck out to me on our trip was in Amsterdam on our bike tour when Cornelia (our tour guide) told us that people rioted when a major roadway was proposed to run through the city center. The roadway was not built, and now in Amsterdam, major roadways are being removed from surface level and being put into tunnels underground. Also, before going to the Netherlands, we learned about the history of Dutch bike infrastructure and how change started to take shape when people had enough with children dying on bikes. This came up again and again on our trip, and it shows how advocacy is what pushed the Dutch to begin designing the way that they do.

This need for safety that is ingrained in the Dutch culture is seen everywhere in their infrastructure. Bikes are separated from cars or speeds are so low that car traffic and bike traffic move at the same pace. At intersections, bikes are given extra protection, cars expect to look for bikes, and bikes have their own signals. All of these designs come from working to keep bicyclists safe and away from interacting with fast vehicles.

One fact about biking in the Netherlands is that people wear normal clothes on their bikes and their bikes are meant to be comfortable. Besides when we biked on the weekend, we didn’t see people in “workout” clothes biking around. We also saw mostly step-over style bikes with either no gears or only up to seven speeds, which can be seen in the picture of me below. These differences in biking culture from the United States are the result of feeling safe and comfortable when bike riding. When you bike in the U.S., you feel like you have to keep up with cars, so you bike harder and use a bike meant for racing. In the Netherlands, you can go slower and not feel that pressure, allowing you to use a less intense bike and wear clothes that aren’t meant for sweating in. 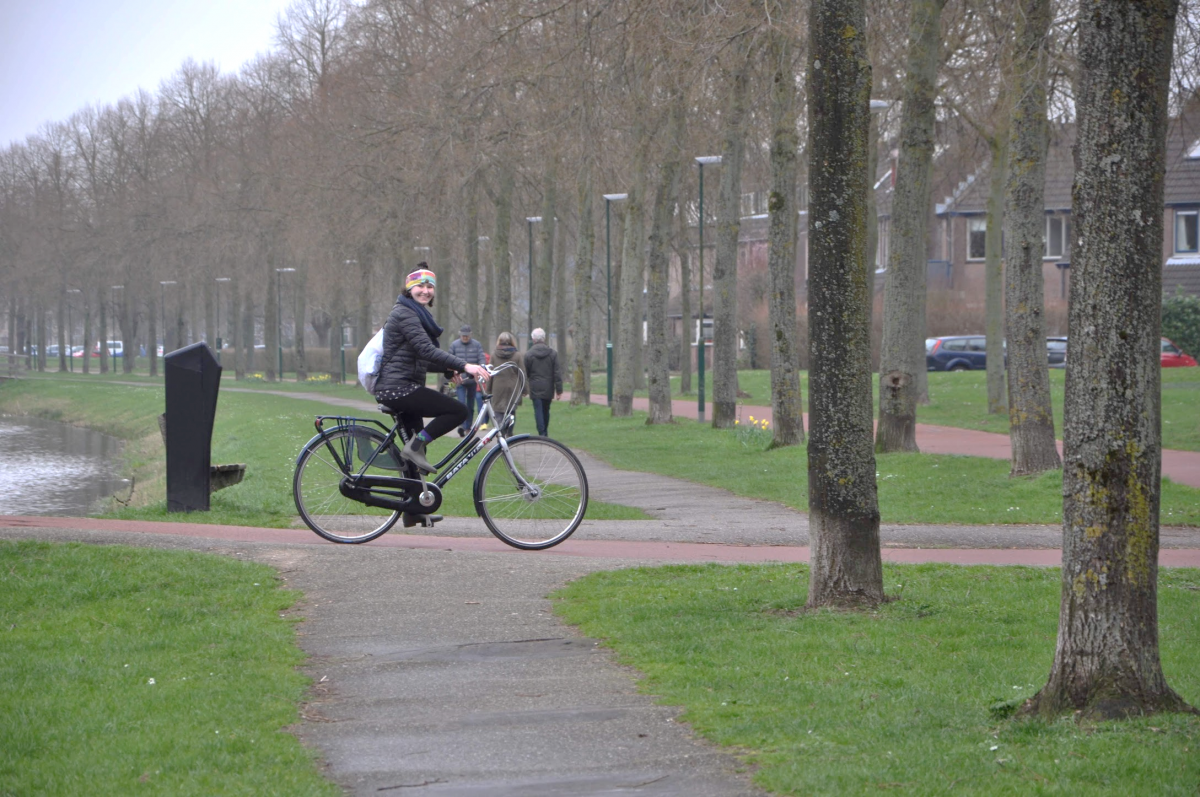 Although I learned a lot about bike planning and transportation planning on this trip, I am still having a difficult time imagining Dutch design solutions in the United States. Maybe it’s because I have worked on projects in the past where maximizing vehicular capacity and level-of-service are so important that I can’t imagine purposely designing a street that will cause congestion for cars; or maybe it’s because our population density is lower and we don’t have adequate transit available. I’m hoping that I’m wrong about the United States because the Dutch value sustainability and safety just as much as I hope we can one day. I loved living like the Dutch do for just a short while, and I look forward to taking their values into my own life by driving less and biking and walking more.