Cycling Infrastructure in the Netherlands vs. the U.S.

This week, we were tasked with reading a few chapters of a book called City Cycling and a couple of reports from the Dutch government. These are a few of my initial thoughts, though I had many other thoughts while reading.

When reading about bicycle policy in the Netherlands compared to the United States, it immediately struck me that the Dutch are willing to put money into bike infrastructure and that they give preference to bikes over cars in situations where money or space does not allow for cycle tracks, such as in their advisory bike lanes, shown in the picture below. It is also clear that the United States’ policy regarding bicycle infrastructure has been misguided and misled into the practice of blaming bicycle riders for their lack of skill rather than blaming a lack of safe infrastructure for the embarrassingly low numbers of cyclists on the roads. Cities like Davis, CA, and Portland, OR, where planners were inspired by European biking, are of the few in the United States that have taken a more Dutch approach to bicycle infrastructure. Those cities where the infrastructure is built, have seen increases in biking. This goes to show that the Dutch have the right ideas when designing for the “traffic intolerant” bicyclists. (Pucher & Buehler, 2012) 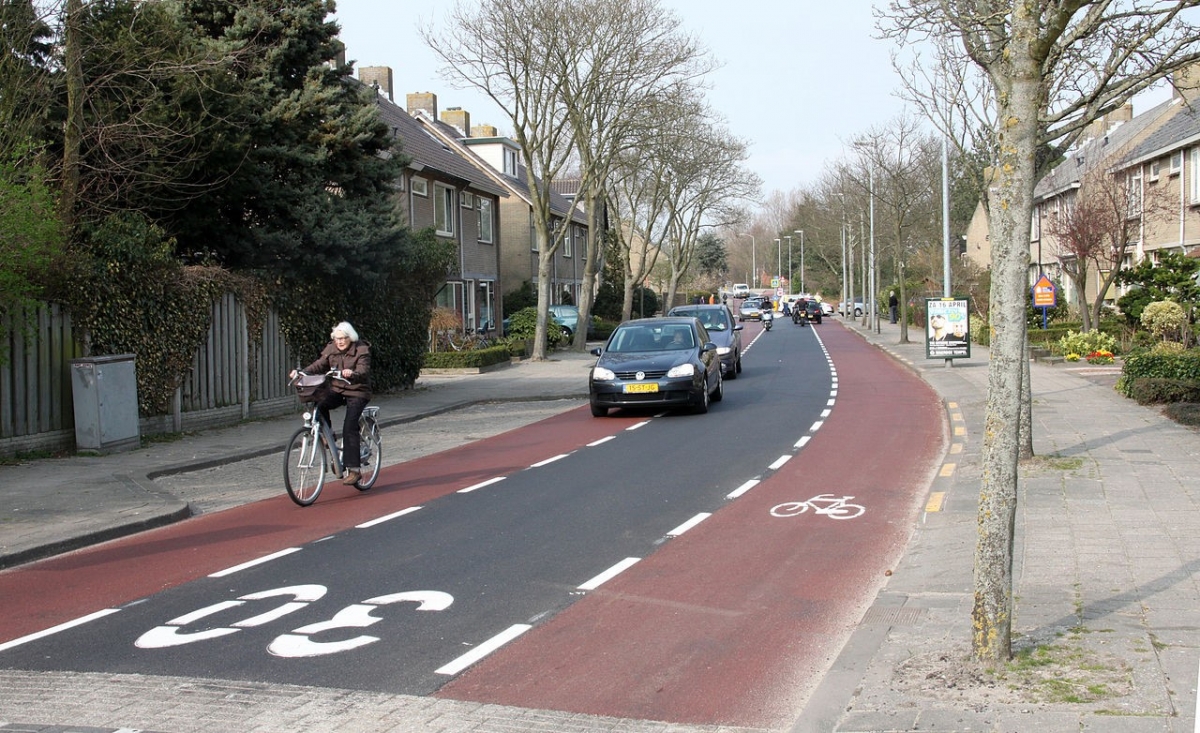 What I mean about the Dutch way of designing is that they do not tolerate bicyclists having to share the road with motorized vehicles unless speeds are extremely low (less than 20 mph), no centerline is painted on the roadway, and no parking is along the roadway (Pucher & Buehler, 2012). This is the equivalent to riding a bike in a suburban neighborhood in the United States. In almost all other situations in the Netherlands, the bike infrastructure is separated with a curb or barrier from both motorized traffic and pedestrian traffic.

One of the main reasons the United States justifies putting bicyclists in the road with motorized vehicles is because of the threat of a vehicle not seeing a bicyclist at an intersection when the driver is turning right and the bicyclist is continuing forward. The Dutch fix this problem at minor intersections by having the cycle track raised, so that the presence of bicyclists is brought to the attention of the driver. At major intersections, the Dutch implement roundabouts, have cycle tracks continue around the corner to provide space for queuing, grade-separate vehicles and bikes, or have bike-specific signalization. The Dutch city of Houten, a city we will be visiting in the Netherlands, has gone so far as to prohibit vehicles in the center of the city, providing bicyclists free reign of the area with no fear of intersections with motorized vehicles. (Pucher & Buehler, 2012)

Last, what really hit me was that the Dutch have the greatest number of bicycle riders (27% of trips in the Netherlands are made on a bike) and the lowest fatalities per kilometer cycled (1.1 cyclists killed for every 100 million km cycled) (Harms & Kansen, 2018; Pucher & Buehler, 2012). This shows that there is safety in numbers and that the Dutch designs work to keep cyclists safe and comfortable riding. What I also see from the Dutch cycling planning is a chicken and egg situation, but with an answer. If you ask yourself “what comes first, the cyclist or the infrastructure?” the answer is the infrastructure. If the infrastructure is built for cycling, then the cyclists will come. We, as transportation planners, cannot wait for a sudden surge in cycling in U.S. cities to start designing and building infrastructure for cycling because then the population will never start to cycle.