Convenient Integration of Bikes on Transit

The Dutch quite often integrate bikes on transit. Most trains have designated cars for people traveling with bicycles, however it is more common to park bikes before boarding trains. There are several “Bike-and-Ride” locations at train stations to incentivize people commuting longer distances to bike part of the route and take the train instead of driving by car. To support this, there are rideshare programs located in bike parking facilities for people who travel further distances after taking the train. Cycle paths typically lead directly underneath train stations by means of tunnels that go into bike parking areas. One example is shown below: 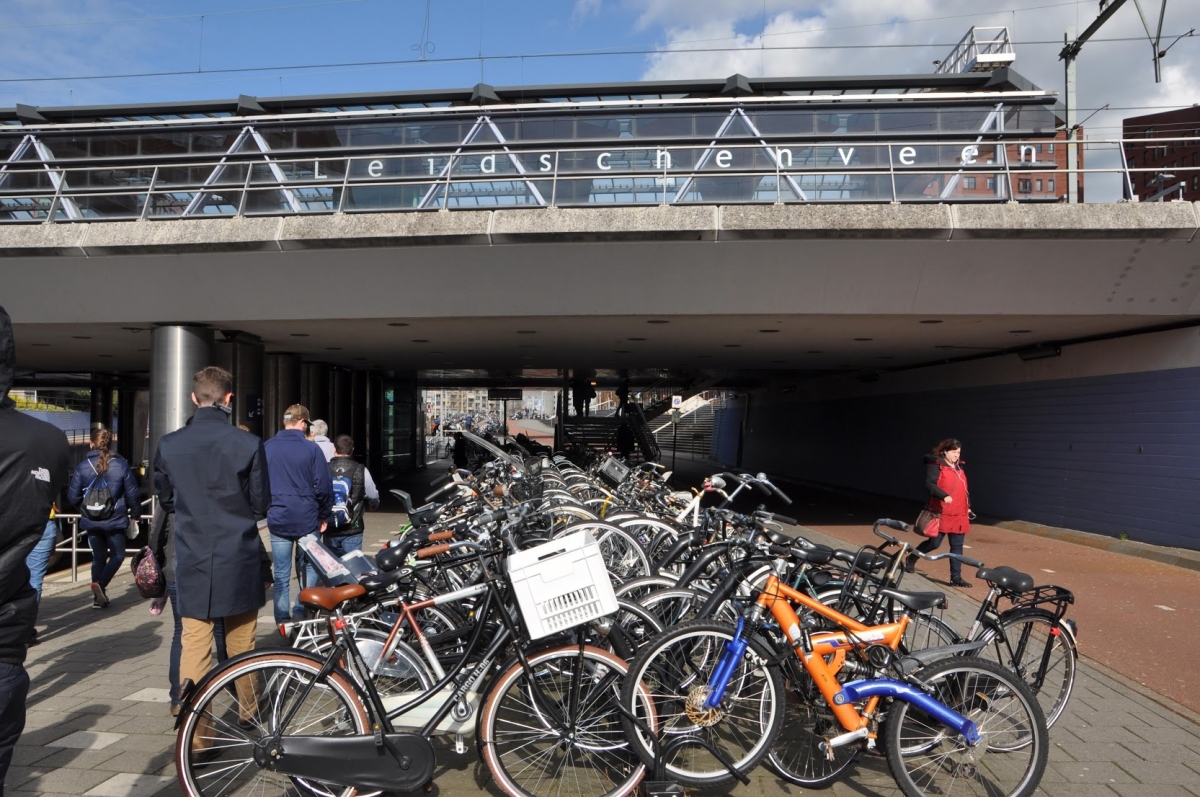 Trains stations integrate bikes through parking design. You can see in the figure below that pedestrians enter the train station from this street on the left with stairs and an escalator, and bikes enter the parking deck directly at grade with the street. 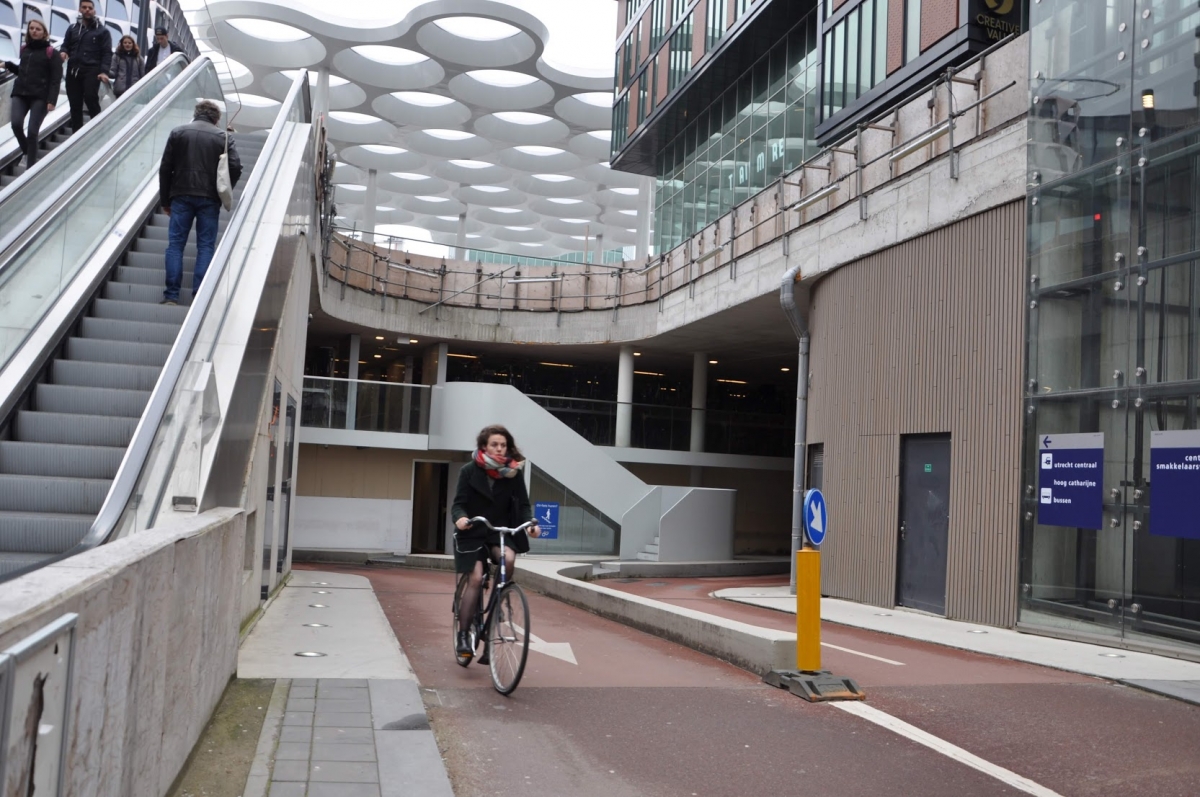 Figure 2: Entrance and Exit to Bike Parking Underneath the Utrecht Centraal Railway Station

Utrecht Centraal Railway Station currently offers a capacity of 12,500 bike parking spots and is increasing that number to 22,000 spaces which will be the world’s largest. The bike parking has two levels to increase capacity in the parking deck, seen in Figure 3. At the far back of the figure, you can see the two entrances into the bike parking floors. 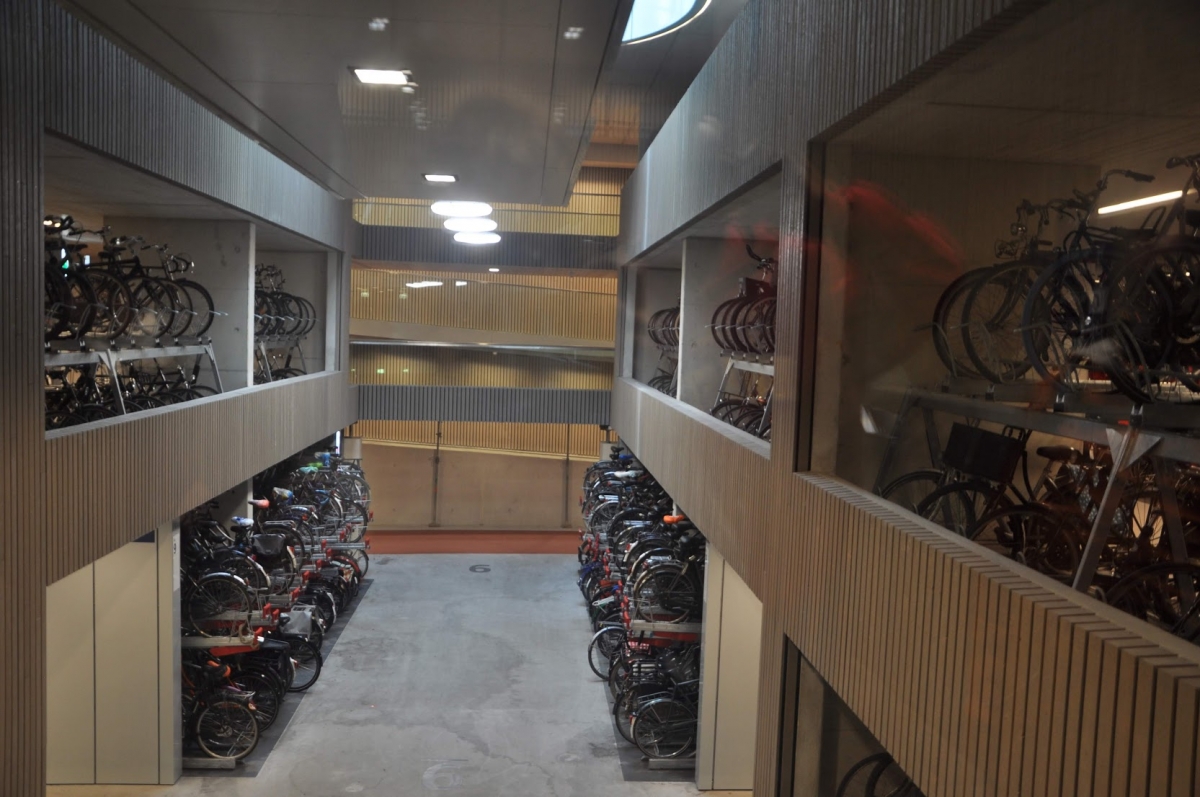 Not only is a sign posted at the entrance of each parking aisle, but there are sensor lights above each parking spot to help locate available parking spaces. You can see in the figure below the sign posting in Utrecht. 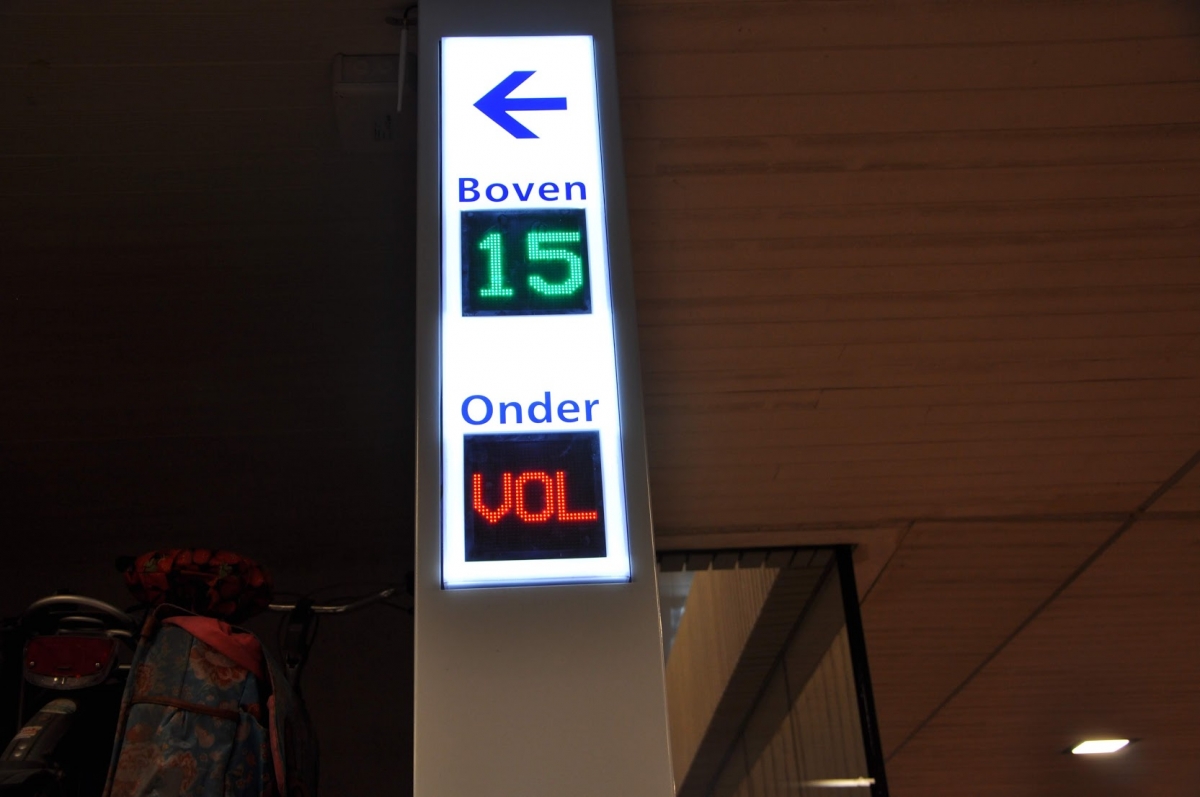 Trains have a higher height of entry than trams to encourage bike parking at train stations. Trains are for traveling cross country between cities, and trams are for inner city travel. Bikes can be taken on board trams with lower ridership because there is more space to fit bikes with the current demand. The Metro in Amsterdam has platform heights equivalent to the height of the trains which makes for a smoother transition for cyclists to bring their bikes on board.

Dutch measure transit performance in numerous ways including waiting time at traffic signals, amount of traffic, safety records, dwell time for public transit systems, and reliability. Hague traffic operation engineers aim for waiting times below 100 seconds, with the best wait times under 70 seconds at traffic signals for bikes and vehicles. Amount of traffic includes parking capacity for bikes and vehicles. When bike parking reaches capacity consistently, the transit authority must find alternative locations for bike parking to continue encouraging cycling as a transit mode. Dwell time includes time to enter the transit system and scan in, such as the Metro in Amsterdam, as well as wait for a train. Reliability is paired with consistency that people can rely on the bus, train, tram or cycle path to take a certain amount of time for their commute without unexpected delays or interruptions. One difficult aspect of signal timings is when priority is given to trams on shared streets in urban areas, such as the Hague, because it delays cycle times. Shared streets can include where pedestrians and cyclists share the roadway with the tram line. Another example is when bikes are prioritized over vehicles, such as in Delft, so every time a bike button is pressed at an intersection, the cyclists can pass through first. Signal timings are important measures for reliability.