Hallo from the Netherlands!

This past Friday we took a 9-hour flight to Amsterdam, hopped on a couple of trains, and arrived at our first destination: Delft. Since arriving, we’ve been biking our way through the town squares, exploring popular local sites, and of course, eating stroopwafel. For this post, I’ll discuss my first couple of days abroad in Delft, and share insight into the differences between cyclist infrastructure and culture in the US versus the Netherlands.

I could explain how the design differs between the US and the Netherlands, or I could just show you. Below is a series of pictures that show some elements of Dutch cycling infrastructure. You will quickly see that it is hard to compare the two countries because, like the age-old phrase, it’s like comparing apples to oranges. 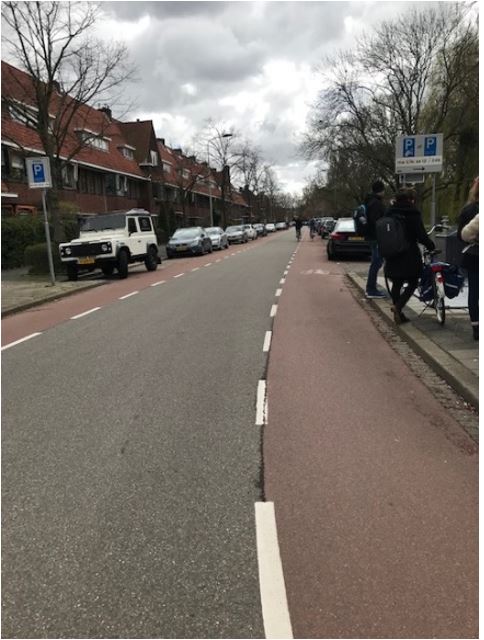 There are a couple things to point out in this picture. First, the cycle lanes are red – not green – like they are in the US. The red is not paint, however, it is a naturally-occurring shade of aggregate that is common in the Netherlands. Since it's aggregate, it doesn’t fade or chip due to weather or age. Secondly, this is a fairly typical width for a two-way street in the Netherlands. Cars are forced to slow down in this environment, creating a safer roadway climate for cyclists. In the US, however, we typically prioritize vehicles. While this may be important on some roadways, there is no reason a car should be speeding through a residential area. 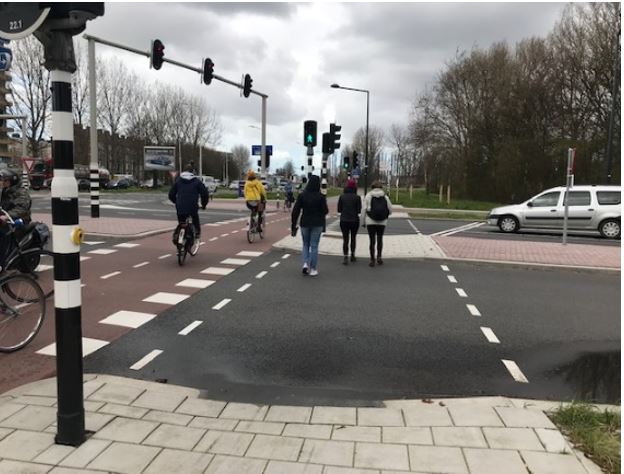 A protected pedestrian and cyclist crossing at a busy, high-capacity intersection

Pedestrians, cyclists and vehicles all have their own space. In the US, it is rare to have so much space for all three modes of transportation. It is even more rare to have dedicated signals for each mode. 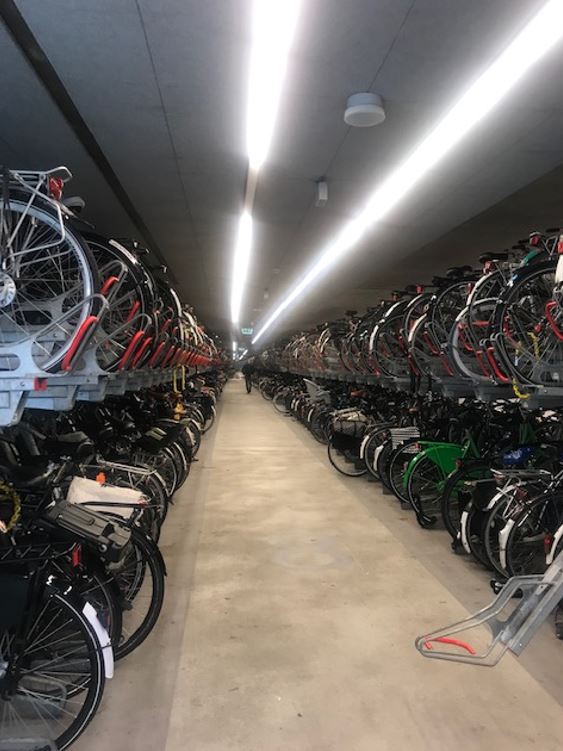 Plentiful bike parking in and around Delft is a must. The parking facility shown above has approximately 5000 spaces (and it’s still not enough!). The facility is well-lit, clean, and secure from the elements. This parking is located just steps from the train platform, making it easier than ever to store your bike for longer trips. In the US, you may find a couple of bike racks outside of a transit station, but you probably can’t enter the facility at full speed like you can in Delft, and you may feel slightly nervous about the security of your bike.

How cyclists are prioritized

In the Netherlands, the hierarchy of cars, cyclists and pedestrians is a bit different. Although I’ve only been here two days, below is what I’ve gathered about said hierarchy:

Most important: Cyclists. Cyclists rule the roadways. When circling through a roundabout today, I encountered an incredible thing.. the cars actually stopped for me. They did not honk, they did not roll down their window and yell, they simply waited. Also, most streets are narrow. This signals to vehicles that they are the guests, giving the cyclists higher priority

Pretty important: Pedestrians. The biggest surprise is that cyclists are even prioritized over pedestrians in most cases. Like the roadways, sidewalks are also narrow, and if you are a pedestrian, you better be aware of your surroundings. It took but a few near misses to start looking both ways before crossing over any red pavement, and to step aside immediately if you hear a bike bell.

Least important: Vehicles. It’s not that vehicles aren’t important, but cyclists and pedestrians are more important. Many households still own a car (just one, though) to make longer trips. Drivers seem to understand that cyclists have the right of way, and that they are no more entitled to roadway space than anyone else.

Many of us think of biking as something we did when we were little to get to school or perhaps a friend’s house. Yet as we turn 16, it is commonplace to purchase a car and ditch the bike. In the Netherlands, biking is a utilitarian activity. Instead of hopping in a car and driving down the street to pick up a loaf of bread from the store, the Dutch opt for their bike. As stated above, driving can be a pain because of the narrow streets and abundant bike traffic – so why not bike instead? Furthermore, cycling is common transportation mode for all members of the population, including women, children, and seniors. Safe and thoroughly connected infrastructure has changed the culture in the Netherlands from car-centric to bike/transit/pedestrian-centric, increasing access and mobility for all age groups.

That’s all for now. Check back in a couple of days for even more updates and insights into my trip!