To illustrate people's comfort with cycling in the United States, I observed the results drawn by a survey. It will help to gain a perspective on the type of infrastructure necessary for the average person’s comfort level.

Surveys conducted in Portland, Oregon categorized cyclists into four categories: Strong and Fearless, Enthused & Confident, Interested but Concerned, and No Way No How. The surveys found that bike lanes only satisfy 8% of the surveyed people and that most people are interested in cycling but need protected facilities to feel comfortable. Overall, this is an accurate representation of our class going into the bike tour, even as transportation engineers (Geller, n.d.). Below is a visual representing survey results from Portland, Oregon.

The bike route taken by our class included areas of redevelopment including the BeltLine and Krog Street Market, as well as parks like Piedmont Park and Centennial Olympic Park. Bike infrastructure is accessible for places of leisure but is not found outside of these key locations. This makes the majority of people who fit into the “Interested But Concerned” group feel unsafe riding on streets that connect to these areas of the city as protected cycle tracks do not exist outside these areas.

I felt especially safe when riding with the class around Atlanta as opposed to riding alone. The phrase “safety in numbers” comes to mind when explaining my confidence with Atlanta’s biking infrastructure. I mostly felt comfortable biking not because of the bike paths that separate drivers and bikers but because of drivers’ behavior. I noticed drivers move away from bikers and sometimes drive into the opposing traffic lane when the lane was available to give bikers more space. I most often saw this behavior in drivers when riding on roads with sharrows – a shared lane marking. Sharrows alert motorists that bicycles will be present in the lane and have a direction arrow in the flow of traffic to reduce wrong way riding. Figure 2 is an example of a sharrow. 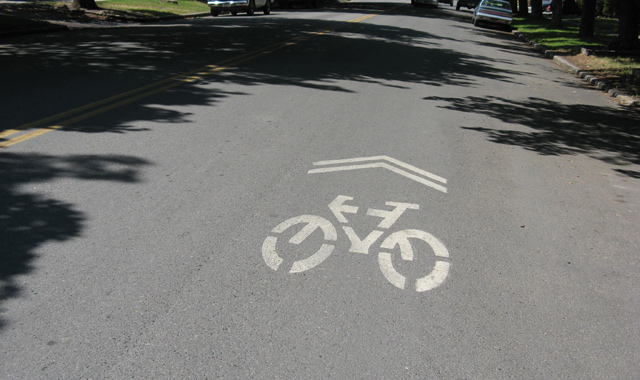 I mostly saw sharrows on our biking tour, in addition to cycle tracks and bike lanes. Sharrows located on Spring St NE did not help me feel safer as a cyclist as the roadway had several lanes of traffic and construction. Driver behaviors highlight a major safety concern in our current biking infrastructure as they feel the need to move out of the way, driving differently than the roadways intended use. Cycle tracks were located at Piedmont Park as well as Centennial Park.

I spotted cyclists along 10th St NE by Piedmont Park in Midtown. Cyclists tend to be more comfortable biking along the park as there is a designated cycle track on the side of the road closest to the park for two lane cycle traffic. There were a lot of markers at entrances to the park indicating to drivers and pedestrians that bikers are present. Additionally, bollards were placed every couple of feet along the street adjacent to the park with several altogether at the intersection of 10th St NE and Monroe Dr. NE, the entrance of the BeltLine. These bollards are plastic vertical posts with reflective strips to provide a buffer between cars and cyclists.

My favorite part of the bike tour was cycling on the BeltLine because the pavement was wide enough to ride next to others in the class, and enjoy the artwork surrounding us. I noticed the pavement was divided in two slabs of differing materials to designate bi-directional traffic. Below you can see the left side of the path is more coarse and the right side is smoother pavement.

The BeltLine would have had a very different vibe had we gone as a class on the weekend, as there would have been more people on the path including pedestrians with pets, scooters and sporty cyclists. With less traffic, it was easy to maneuver around people without feeling like I was posing a risk to pedestrians. One couple on the BeltLine asked me if our group was biking for health class. It must have been unusual to find a group of people who decided to bike together on a lovely Friday afternoon if it was not structured for class. Although it is true that we had to participate in the bike tour, it shows the unfamiliarity locals in Atlanta have with bikers, and especially non-sporty bikers.

Bike lanes are a step-up improvement from sharrows with painted markings for the bike lane. I don’t feel as confident with bike facilities in Atlanta when making left turns as it involves sharing a lane with cars. Luckily, and almost too conveniently, our group made a low number of left turns. I feel more at risk of getting hit when at a stoplight that I will be passing straight through, when cars on my left will be making a right turn. There is low visibility that would make most people uncomfortable. I also don’t think most people feel safe cycling in Atlanta’s infrastructure because it is disconnected.

Downtown Atlanta incorporated more safety in design with bollards located near street intersections, and concrete curbs along busier, narrower roadways like Ted Turner Drive, to notify drivers if they get too close to cyclists. I appreciated this infrastructure because there was heavy traffic and more intersections along the route. However, if I was cycling alone instead of in a group I would not have felt as safe as drivers probably wouldn’t have recognized me as well.

Acceptable distances for bikers in the Netherlands to travel is about 15 km (~ 9 miles) and the best of Atlanta’s biking infrastructure was seen in a mere 7 miles while experiencing slight discomfort in a large group (Wagenbuur, 2018). This is something to consider when most people are interested in biking and Atlanta’s infrastructure hasn’t caught up to accompany those interests.

Cycling for adults and children in the Netherlands is viewed for practicality: getting from point A to point B. While adults over 65 cycle to get to destinations, they also cycle for leisure. Because cyclists in the Netherlands bike to school and work, they don’t feel the need to bike in their free time. In the US, cycling is predominantly perceived to be leisurely, where people will even drive to locations to start biking where it is perceived to be more fun (Wagenbuur, 2013).

Cyclists are thirty times more likely to get injured cycling in the US than in the Netherlands. The way people dress to bike is a great indicator of how comfortable people are on bikes (Wagenburr, 2018). US cyclists will wear helmets for protection and exercise clothing like spandex as they try to keep up with moving vehicles. This satisfies only the Strong & Fearless and the Enthused & Confident cyclists. Cyclists in the Netherlands are much more relaxed in dress, wearing business and casual clothing without helmets as vehicles are not a threat to them because of differences in their infrastructure (Wagenburr, 2013).

After WWII, the Netherlands became wealthy and several highways and roadways were built for motorized traffic that resulted in several thousand deaths per year. In addition to protests made by the public for child death tolls, a global oil crisis pushed the government to incentivize biking to save energy and lower costs. Cycling in the Netherlands is perceived to be safer and more environmentally friendly than driving cars. Cycling provides more space for housing closer to the city as there is limited space used for car parking, which improves people’s quality of life. Cycling is perceived to be safer in the US when there are more people on the streets cycling, even though there is limited biking infrastructure. The built biking infrastructure pushed people in the Netherlands to bike, whereas in the US, people bike by choice even when the infrastructure is poor (Wagenbuur, 2011).

Wagenbuur, M. [BicycleDutch]. (2011, October 9). How the Dutch Got Their Cycle Paths [Video File]. Retrieved from https://www.youtube.com/watch?v=XuBdf9jYj7o ​