BP 4 - Cycling Back to the Separated Track: America's Recovery from Vehicular Cycling

Before diving into the rabbit hole that is the body of this post, one clarification needs to be made. There are two different mentalities that govern the decisions made in both countries that have had grand implications on the successes and failures of bicycle infrastructure development. These mentalities are:

When considering these two mentalities, I would presume that most people would intuitively choose the Netherlands’ theory. However, the mentality that still effects most transportation development in the United States arose for understandable reasons.

In the 1970’s, a man named John Forester gave birth and popularized his idea that to ensure the best future for bicycle-use in America, bicycles must be allowed to travel along the same paths as cars (CITATION). With this policy, he thought, transportation designers could not force bicycles away from key roads that could be crucial to completing a trip. This idea, however, was pushed at a time when government agencies were possibly most willing to fund separate and protected bike pathways. Figure 1 below shows an example of vehicular cycling. 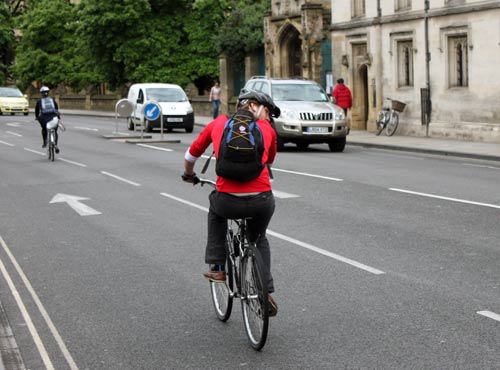 John Forester used his influence as a prominent member in the bicycling community to further push the concept of vehicular cycling, much to the long-term benefit of state and local departments of transportation (DOTs). Since much of the American cycling community had at the time believed that simply using roads without an additional infrastructure was safer and expanded connectivity, DOTs could save money on bike infrastructure and devote it to other purposes.

The Safety Argument of Vehicular Cycling

Vehicular cyclists believe that the safest option for cyclists is to dominate the center of a car lane until an intersection, where cyclists can then move to the right side. This would prevent cars from trying to make passes without enough space in the travel lane, while also preventing the cyclist from being injured when a car turns right. Theoretically, cars can pass with leftover space on the left (unoccupied) side of the travel lane through an intersection.

Forester and his supporters argued that vehicle operators would be forced to see and account for bicycles if they were directly in front of cars. They argued that if bicycles were to travel in separated paths adjacent to vehicle travel lanes, drivers would forget about the presence of bicycles when crossing paths in an intersection.

So, theoretically, now that the United States has developed much of its “bike infrastructure” under the guiding hand of Forester and the vehicular cyclists, cycling in the United States would be safer than in countries where bike paths are separated, right? Figure 2 below shows the exact opposite. 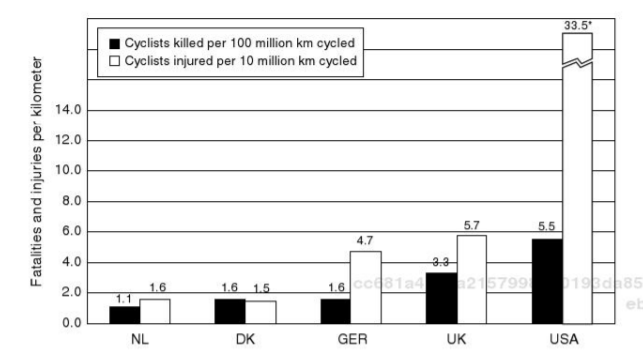 As it turns out, the prevalence of separated bike paths has a positive correlation with cyclist safety. In fact, the United States under the vehicular cycling mentality is one of the worst developed countries when it comes to cyclist safety. The safety provided by “Dutch design” also promotes higher levels of cycling (while much of this style of design originated in the Netherlands, I feel compelled to acknowledge that this theory in transportation design has been increasingly adopted worldwide). Figure 3 below shows the share of cyclists in comparison to all daily trips between a few countries. 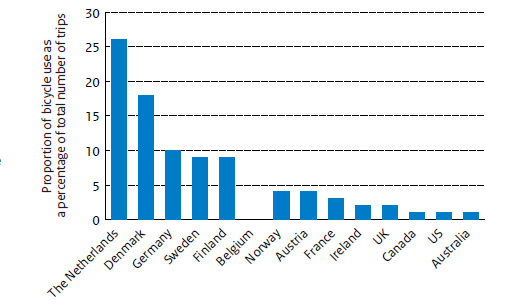 Figure 3: Proportion of Bicycle use as a Percentage of Total Number of Trips (Cycling Facts)

Before explaining many of the differences between our two countries, a reader should look over this matrix of Dutch infrastructure design for bicycles in Figure 4 below.

As one can tell, there is a relatively strict guideline for transportation design that prioritizes the safety of cyclists. In contrast to American design, where shared bike and car lanes (“sharrows”) can exist along roads with a speed limit of 45 mph or more, Dutch design prohibits the mixture of inherently slower bicycles with faster and more protected vehicles.

But what about the issue of vehicle-bicycle conflict at intersections? Well, the Dutch have created a few solutions:

(1) Clear delineation of bike space – Using red asphalt for all bicycle lanes, the citizens of the Netherlands know that when pavement is red, bicycles will be present. The idea of delineation has gained favor in America and is being replicated with the use of green paint.

(2) Elevation changes – Cycle tracks are at a slightly higher elevation than roads meant for cars, meaning that when cars cross over bicycle space, they rise in elevation. Since this has been the standard in the Netherlands for many years, much of the population knows that when driving, an elevation change is a sign for crossing over space meant for a more vulnerable transportation mode. This has not been implemented to a considerable degree within the United States

(3) Bicycle-specific signals – the implementation of traffic signals for bicycles has done wonders to prevent injuries and collisions during the instance of a vehicle right turn across a cyclist continuing straight (but on the right hand side of the vehicle). This has been accepted and is becoming the norm in America because of its success in the Netherlands and other countries.

Figure 5 below shows an example of a Rotterdam intersection with both clear delineation and bicycle-specific signalization. 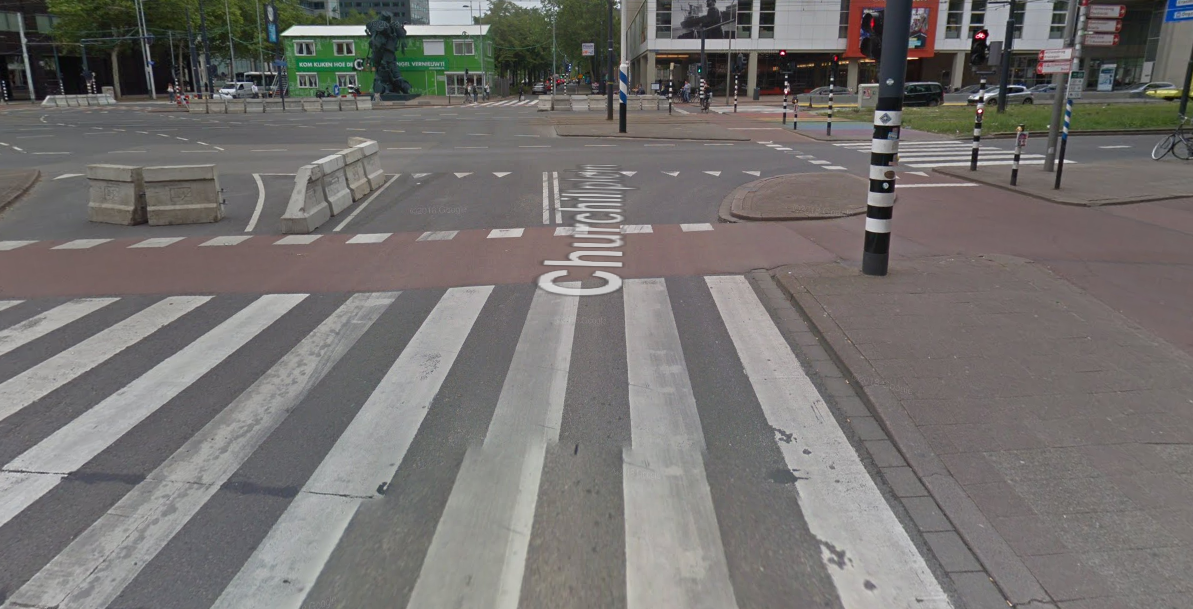 Figure 5: Intersection in Rotterdam with Clear Delineation and Bicycle Signalization

It is important to note that bike parking has been expanded in the United States at transit stations with the implementation of bike racks, bike cages, and bike lockers.

The result of these differences is that the “last-mile” of the intermodal journey is typically finished with a bicycle in the United States, and by foot or with a rented bike in the Netherlands. As ridership and cycle use in the United States increase over time, bike parking at transit stations will need to be expanded further and destination stations will need to become more walkable.

Finally, a combination of infrastructure, biking programs, and policies are necessary to truly improve the levels of cycling in America. This three-pronged approach has been taken by cities within the Netherlands among other countries and has seen great success as a result. Some cities in the United States have taken this approach and seen success, such as Portland. Other cities in the United States will need to follow suit and build infrastructure for bikes, promote cycling through programs, and restrict car use and dominance through policy.