My little sister, Rosie, loves to bike around our neighborhood. Every time I visit home, I see her bright yellow bike is parked at the front door before I see her! Even though she loves biking around our residential streets, when I asked why she doesn’t bike to school, she responded “I can’t cross the big streets?!”. Her school is only 1 mile in distance from our home but the route to school would be 2.5 miles of roadway with heavy traffic. Rosie’s biking conundrum is a example of one of the issues with cycling in the US, bike infrastructure often doesn’t exist! 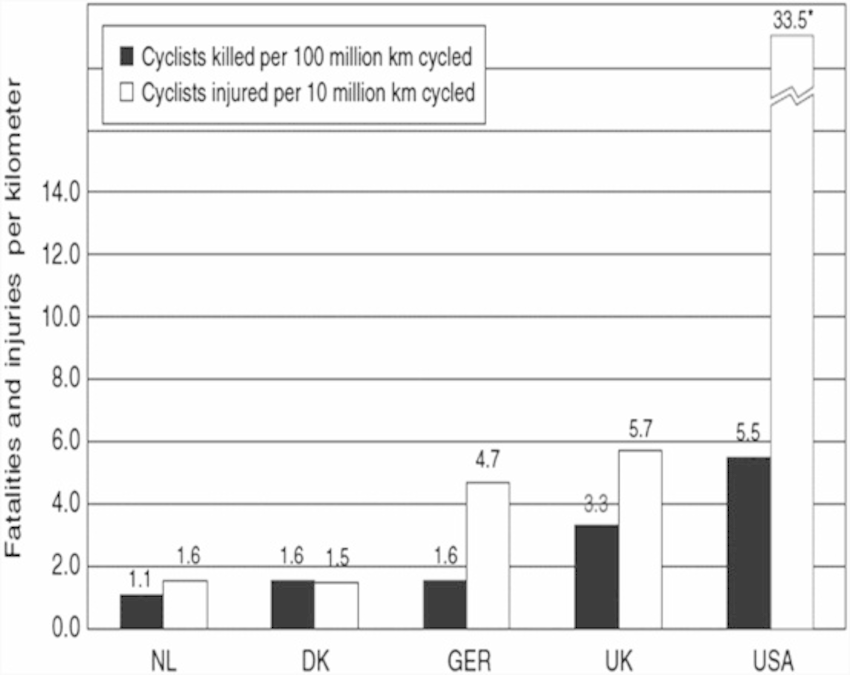 A safe design is essential for effective bike infrastructure. If bicyclist have a low level of perceived safety, they may not chose it as their mode of transportation and lose out on the potential improved health and cost savings benefits. Most US designs focus on integrating bikes with traffic not separating lanes which leads to conflict because cyclists are more vulnerable than fast moving “cagers”. Engineering design guide books in the US like AASHTO (American Association of State Highway and Transportation Officials) dismiss design options with separate paths. There is also a lack of bicycle separation design criteria in the US so the cheapest chosen option does not include separate bike infrastructure. In the Netherlands, cycling and traffic separation in design is almost assumed. The facility selection designs in the Netherland only allows shared space under low volumes, low speed limit (less than 20 mph), no striping, and no multi-lane facilities.

Transportation infrastructure involves a large planning effort before the design can take place. In the US, cycling can be left out of the planning process because there is an assumed lack of interest, lack of engineering guidance, and lack of funding. For example, two alternative forms of transportation, cycling and public transportation, still aren’t completely integrated. In the Netherlands, there is a recent focus with bike parking at transit centers and in the US there is a recent focus of allowing bikes on transit. In the Netherlands, infrastructure policy focuses on building competitive, accessible, livable, and safe transportation (Summary National Policy Strategy for Infrastructure and Spatial Planning, 2011). Interestingly, the policy summary only uses the term cycling once! Cycling is just the more efficient way of reaching those goals. Although the US and the Netherlands have similar policy goals of economic development, safe infrastructure, and a healthier people and planet, they have very different ways of working toward their goals. Rosie may have thought I was crazy for suggesting that she should bike to school because of the current infrastructure in the US. If the transportation design and planning process was more similar to that of the Netherlands, she wouldn’t think I was as crazy (just regular older sister crazy ;)) Me and my little sister, Rosie, during a fall visit to GA