Blog Post #7: Transit and Bike Integration in the Netherlands

Today the class toured the ins and outs of the Amsterdam public transit system. The quaint town of Delft is worlds apart from the port city of Amsterdam it seems. While that was the focus for the group today, our class of burgeoning bike infrastructure experts has reaped the rewards of a top-tier transit system composed of trains, trams, and busses. This system is certainly not compartmentalized in relation to the biking infrastructure – the two systems interact and complement one another.

Bikes and transit are primarily integrated so that long distances can be covered by train or tram, while the “last mile” can be covered by bike. The system functions so that bikes can be brought on board trains and some other vehicles (trams, etc). Certain train cars are marked with a bike symbol to indicated space for a stored bike. 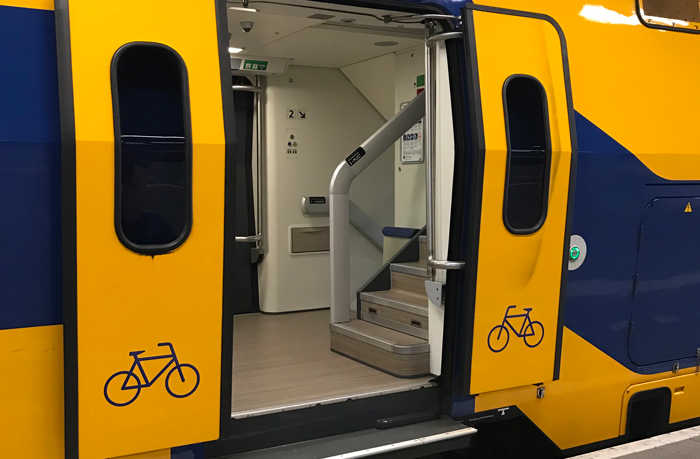 Getting a bike into the station is moderately simple as well. One can simply bring them through the turnstiles. This can only be done on non-peak hours, however. When some of our group members took their bikes on board, they had to purchase a special pass for around 7 Euros. There are special provisions for foldable bikes, which can be taken on without charge.

Bikes in the Station 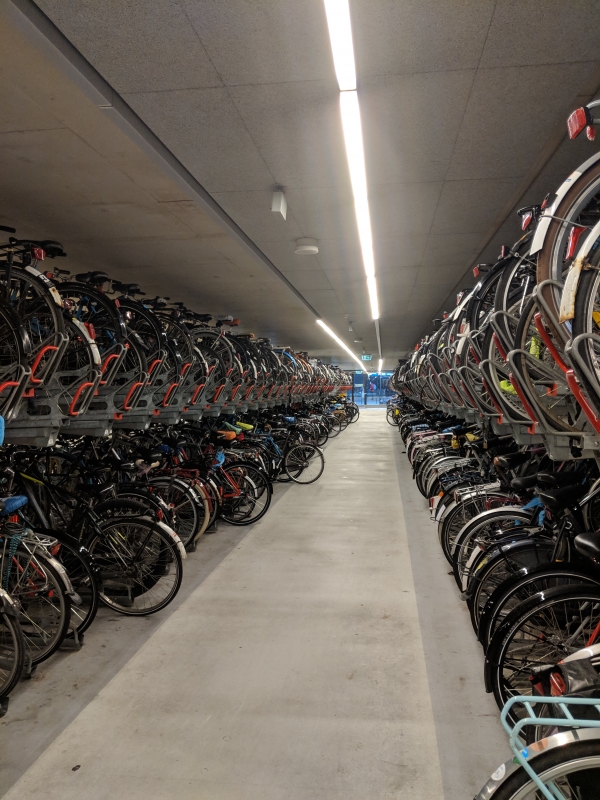 Bikes in the station

The emphasis by the Dutch, by far, is to provide quality bike parking in and around stations so that a rider may store a bike at a station without having bring the bike along for the ride. Many commuters will have two bikes: one for the “initial mile” to the station and one for the “final mile” once at the destination. This emphasis can be seen in the shear amount of investment in bike storage. Utrecht had multiple storage areas with the largest holding 12,000 bikes. Den Haag, Delft, and virtually all major Dutch cities had large amounts of indoor bike parking at transit stations, while many cities were also in the process of building additional parking. Available parking is at capacity wherever one travels, showing the popularity of this approach. In these facilities, the exterior bike routes flow seamlessly into the garage, while location is always very close to the transit.

This coordinated system does not only rely on bike facilities alone. The trains form a critical component and must function efficiently to drive usage. To measure transit performance, the Dutch focus on measurables such as ridership, total trip time, on-time arrivals, and dwelling time. In Amsterdam, we have seen a focus on reducing total trip time in particular, as the North-South metro line was a massive investment for the city with a total cost above 3 billion Euros. Efforts are made in the hopes that transit is reliable and responsive. As I have visited, trains are rarely delayed, and ETAs are posted in multiple locations. For trains and trams, there is a focus on dedicated right-of-way. This reduces delays caused by car traffic. Out of all modes, including bike and pedestrian, transit receives first priority. With this system in place, the Dutch have paved the way for a quality combination of transit and bikes so that people can move about with ease.