After cycling around Delft and the countryside, my initial assessment is that cycling as a mode of transportation is a baseline assumption for engineers and planners here in the Netherlands. As a result, cycling facilities are a given, not just a privilege, as they seem to be in the U.S. It seems as though no matter what direction you are traveling, there will always be a cycling facility available. Sure, the major roadways may not have any provisions for cyclists, but there is likely a smaller road that runs parallel to the major roadway that will have something for cyclists.

Engineers and planners take into account bicycling for every project because the Dutch use their bikes for all types of trips. In the U.S., cycling is mainly for recreation, with a small amount of utilitarian cycling. But in the Netherlands, bikes are used to get to work, go to the store, go out for social activities, and most everything else! While we did see some lycra-clad bicyclists out for a Sunday morning training ride, the majority of people we’ve seen on bikes have been dressed in normal clothing and riding around town, sometimes balancing large objects or carrying bags, going about business as usual. 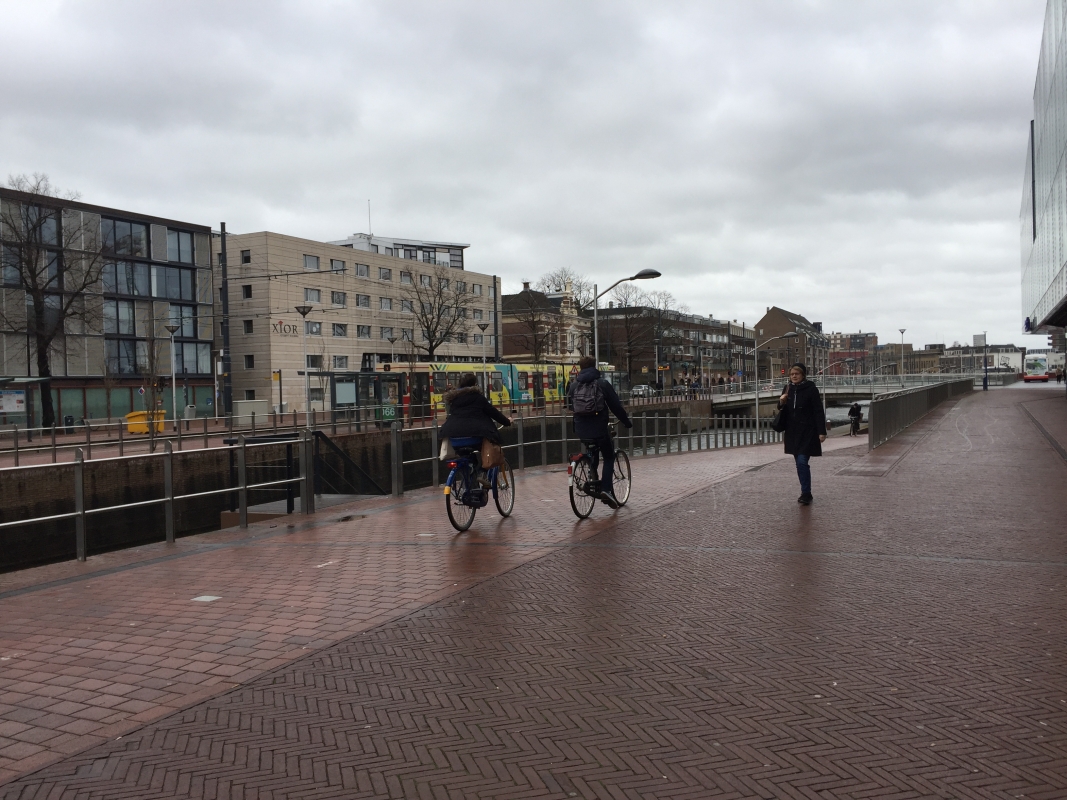 The prevalence of cycling for all types of trips means that it is necessary to have bike infrastructure available for every possible direction of travel. Cycling is perceived as an integral part of the overall transportation system of the country, and therefore it is supported by adequate infrastructure.

Comparison to Design in the U.S.

One thing that really struck me was the importance of locating any cycling facilities on streets that cyclists want to use. In the U.S., you can find an unprotected bike lane on a road with a 40 mph speed limit or with 3 lanes next to it. In the Netherlands, this wouldn’t even be considered. And it makes sense, because no one except for a few extremely confident cyclists would want to ride on or cross a busy roadway. Dr. Watkins made an interesting point on our ride today: she said that when designing for bicycles, the Dutch treat busy roadways like the extremely common canals throughout country—they will build bridges over or tunnels under them, because they view the busy roadway as an impassible obstruction for cyclists. 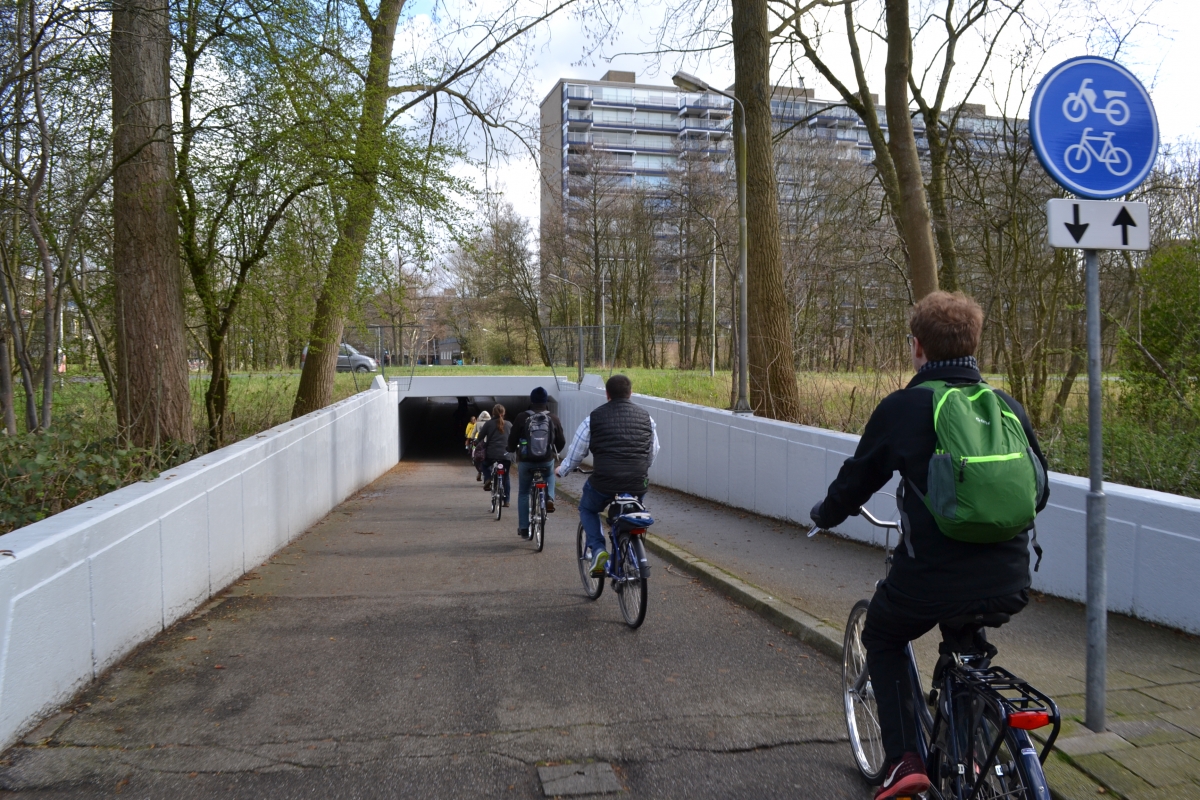 Figure 2: A tunnel allows bicyclists to travel under the busy Prinses Beatrixlaan roadway in Delft. 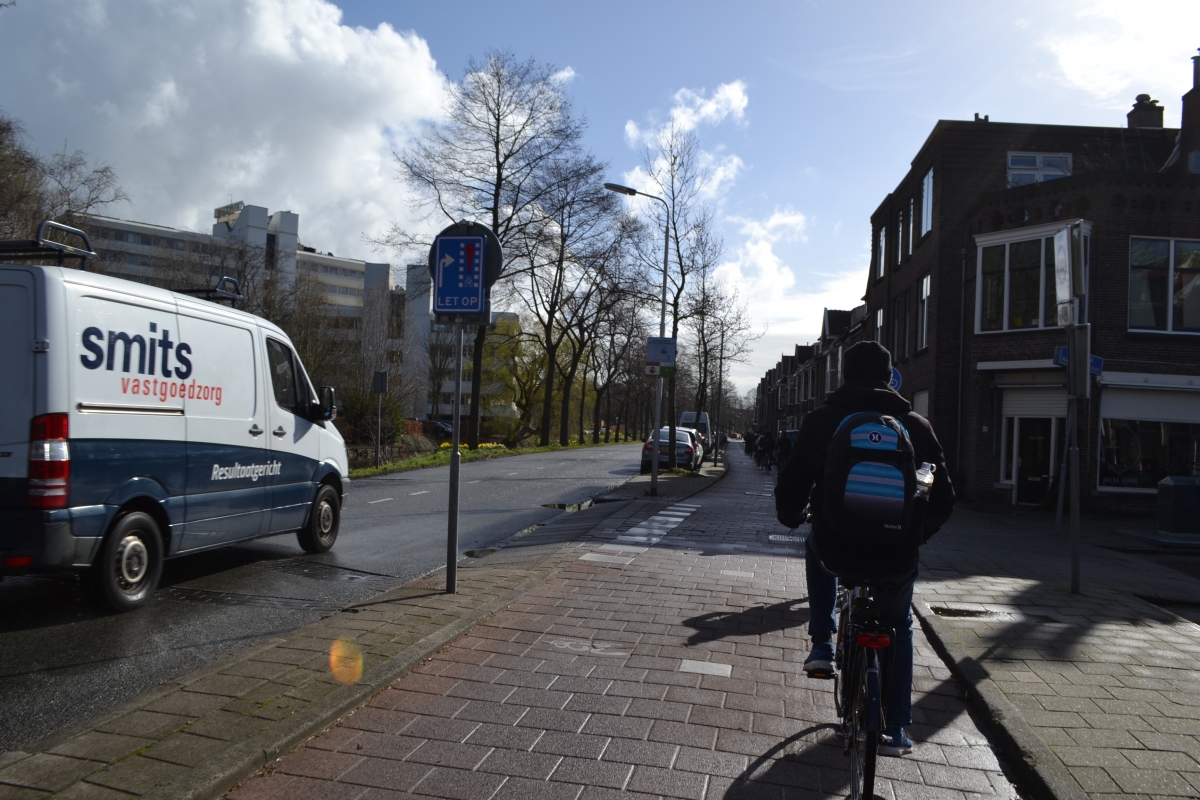 On roadways with both bikes and vehicles, the red pavement markings signal to drivers where bikes are allowed. On some low-speed, low-traffic streets, the whole roadway will have red pavement, signaling to drivers that cyclists have the priority on the roadway. These roadways will only be wide enough for around 1 car at a time; this geometry shows drivers they need to cede to bicycles. This is the case with Woonerfs, where the speed limit is 6 mph, and bicyclists and pedestrians have the priority. 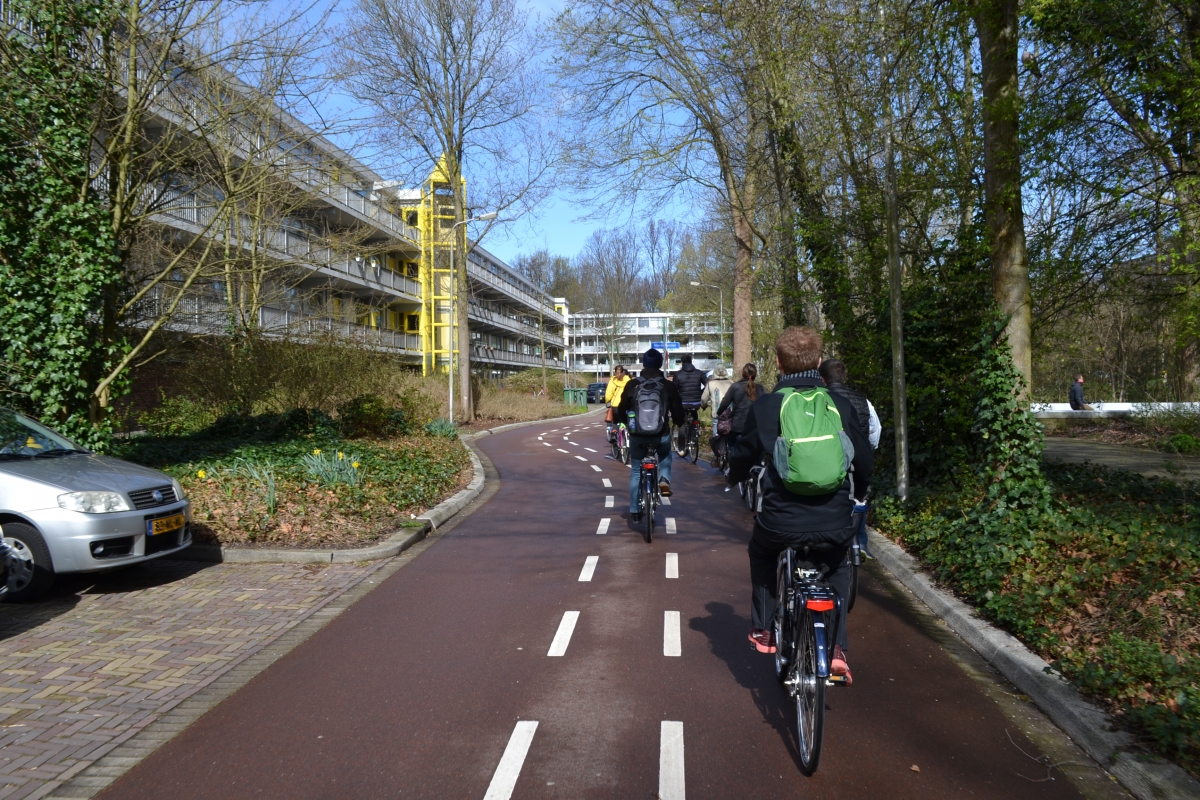 Figure 4: Bike lanes take up most of this roadway--any cars must yield to bikes. 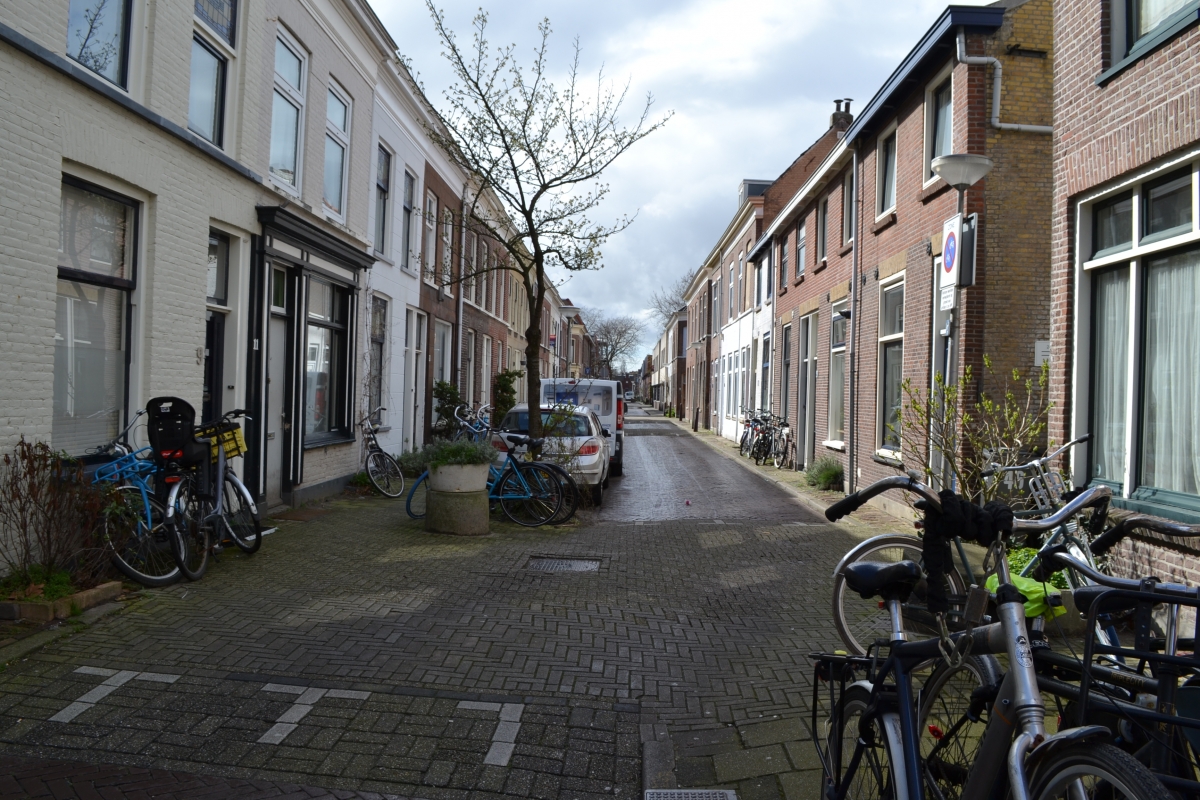 At locations where vehicles intersect bicycles, triangular pavement markings and signage tell vehicles to yield to any present cyclists. Additionally, at many of these intersections the bicycle path will be elevated, creating a sort of speed table that both signals drivers to yield to bikes and helps physically slow down the vehicle. 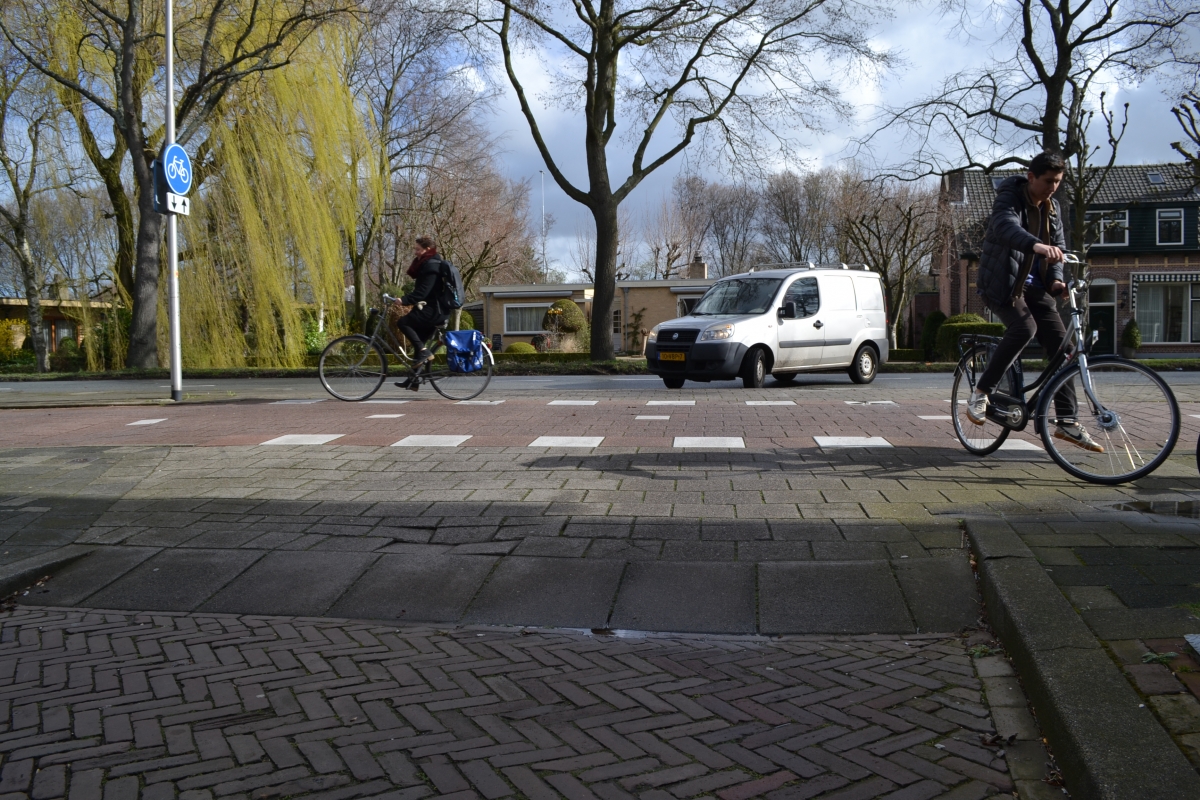 Figure 6: A raised crossing for bicycles

Overall, the Dutch do a fantastic job of prioritizing cycling to ensure that all users are safe!