Upon arriving to the Netherlands and retrieving our bicycles, it quickly became clear how prevalent cycling is in Delft. However, on our first day of real biking, I was surprised by how difficult biking was. In Atlanta, biking is difficult because of a lack of infrastructure and awareness, and the resulting lack of safety. On the way to Maeslantkering, the sights were beautiful, the infrastructure varied in design but was consistent in that it provided a safe spot for bikes, but the wind was brutal. This made it tough to adopt the Dutch mindset that cycling is always a viable option for realistic distances. Passing through tunnels and riding primarily on cycle tracks and paths dedicated to biking in the countryside, your next move as a cyclist was never a serious thought. This sentiment continued throughout the next day, and I expect it to continue throughout the week. This is a new feeling for me: not having to question if your security as a cyclist is going to suddenly disappear and you’re going to be stuck on a freeway.

Monday focused on Delft cycling infrastructure and different types of pavement and road design. We saw roundabouts that gave cyclists the right-of-way, advisory lanes, bike lanes and cycle tracks, all pictured below in the respective order. 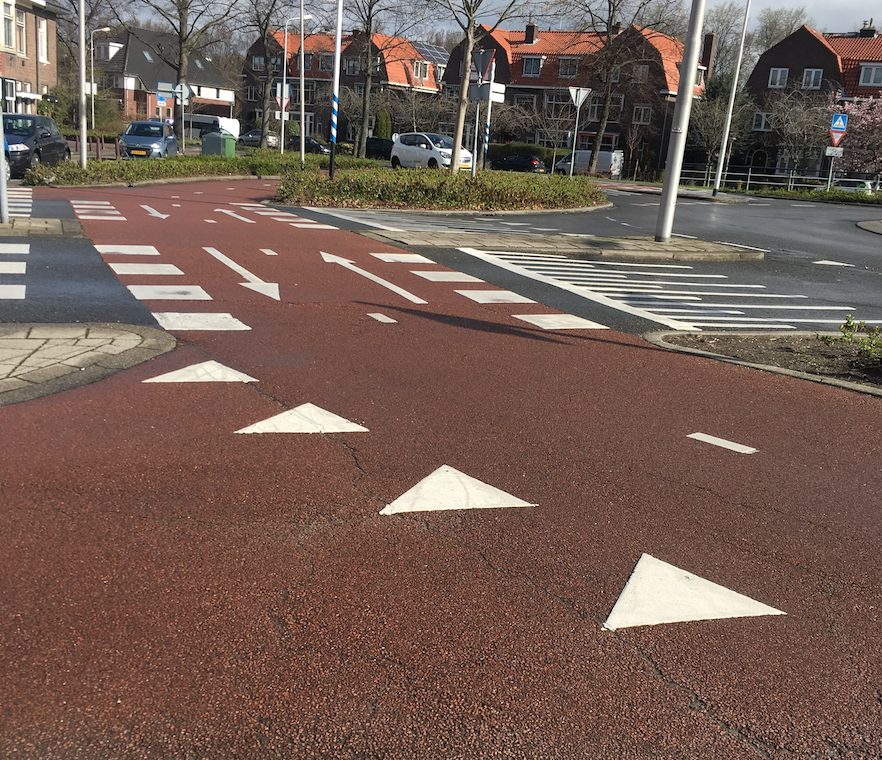 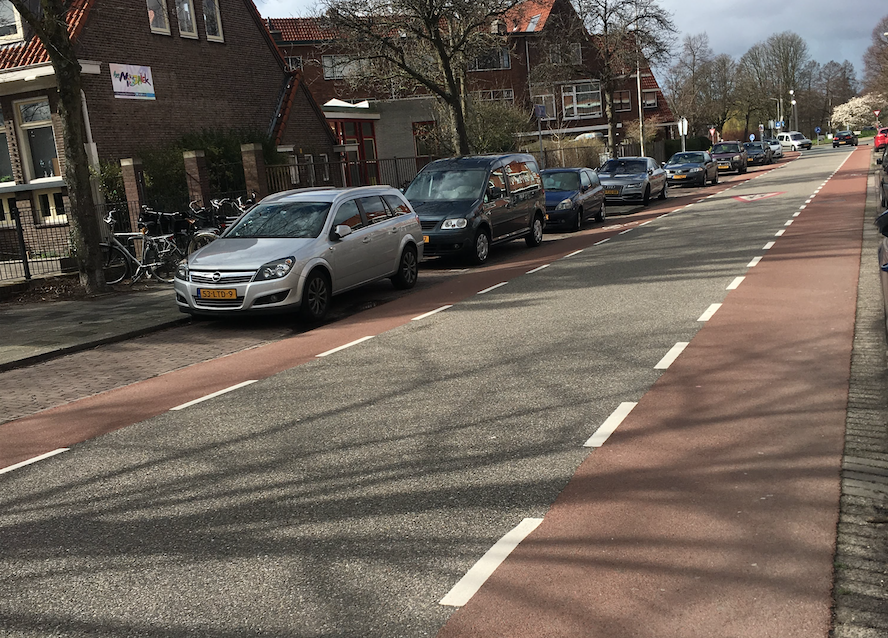 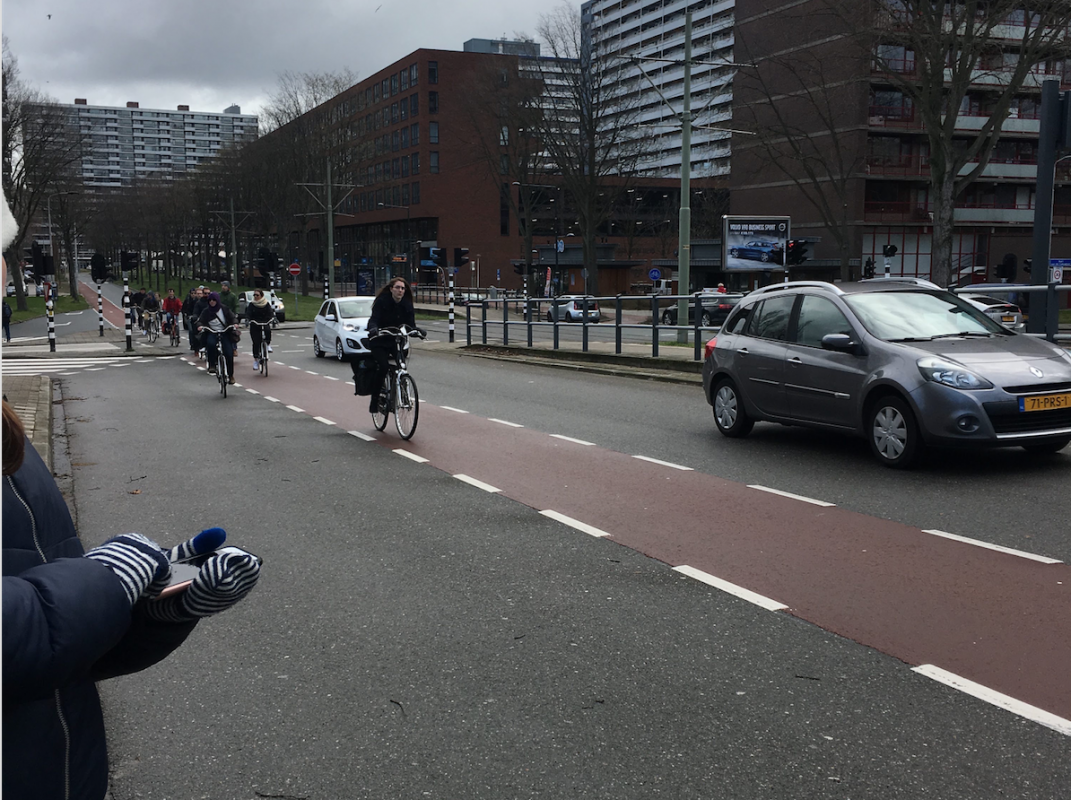 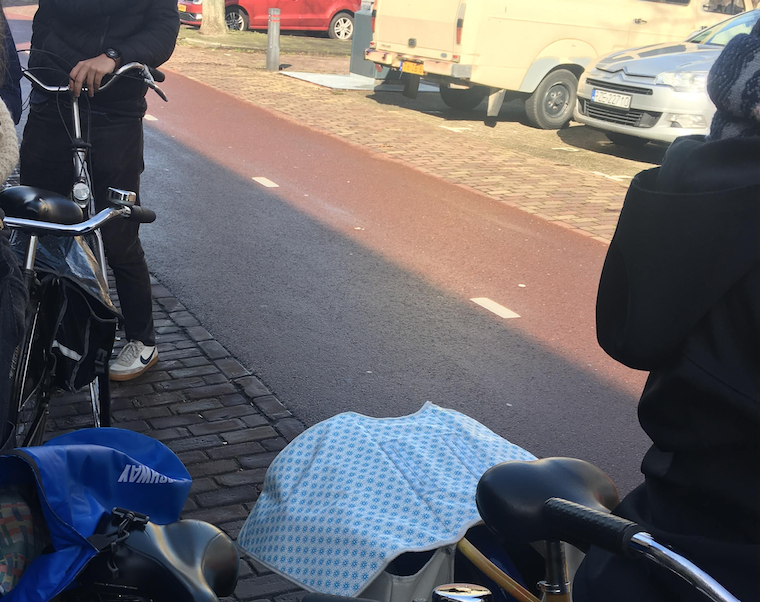 The main feature that I believe contributes to the cyclist culture is the slow vehicular speeds. There were plenty of roads where cars came uncomfortably (by Atlanta standards) close to me, but I was not afraid because they were driving cautiously. While cyclists are prioritized in that they are given the right-of-way at an uncontrolled intersection with vehicles, I would not say bikes are always the top dog. Plenty of times during the bike rides we had to unexpectedly brake for pedestrians. Equally as often, we would not be given much time to pass through the intersections, as the bike signal seemed to pass very quickly. I can see a proud American cyclist becoming frustrated with the inability to travel right alongside vehicles rather than opposing them at certain intersections with the 2-part turns. This type of design can be seen in the following figure. 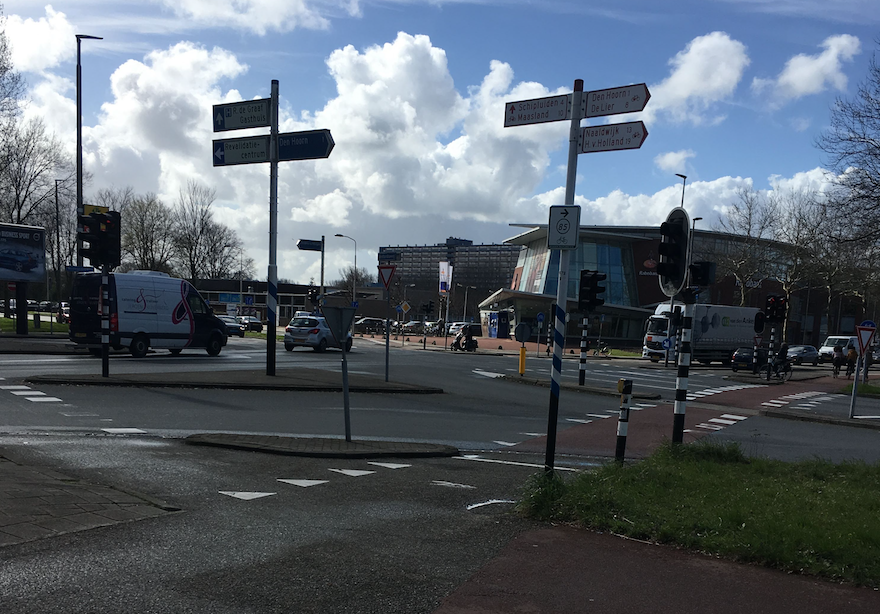 Especially in Delft, cycling is seen as second nature. All types of people bike on all types of bikes. We’ve seen older women biking with dogs in their front baskets, two young girls biking separately while holding hands, young men biking with no hands, and plenty of people biking with flowers in hand. My main takeaway from these last few days is that while cycling here seems so easy, our group is definitely not apt yet. While we understand and appreciate the seamless transitions from advisory lane to cycle track, we lack the awareness the Dutch have that is so crucial to their successful commutes. At intersections, locals seem to have a second sense about who goes first if both bikers arrive simultaneously, and what to do in the case that a pedestrian, cyclist, and car all arrive together. I hope that throughout the rest of the trip we improve in our awareness and can begin to really bike Dutch style.