We have spent almost three days in the Netherlands at this point – all of which have included some bicycling. So far it is easy to see why bicycling is so popular here. I have found that with only a few exceptions it has been a very relaxing and enjoyable experience. I have been able to learn about my classmates through conversations during the bike rides – something that while small, is not typically possible on American infrastructure during utilitarian routes. The separated infrastructure eliminates the fear of cars running you off the road and the way the intersections are laid out makes them easy to navigate. The bikes themselves are also an important piece of the experience – It is almost impossible to be aggressive while on these bikes. While it would be nice to have gears from time to time the posture of the bike is much more casual than the typical mountain bike I am used to in the states. The following picture is of the roundabout treatment – here the bicyclists have complete right of way. This is not the case at every round-about and the decision is made as a case by case basis depending on traffic and bicycle volumes in the areas. 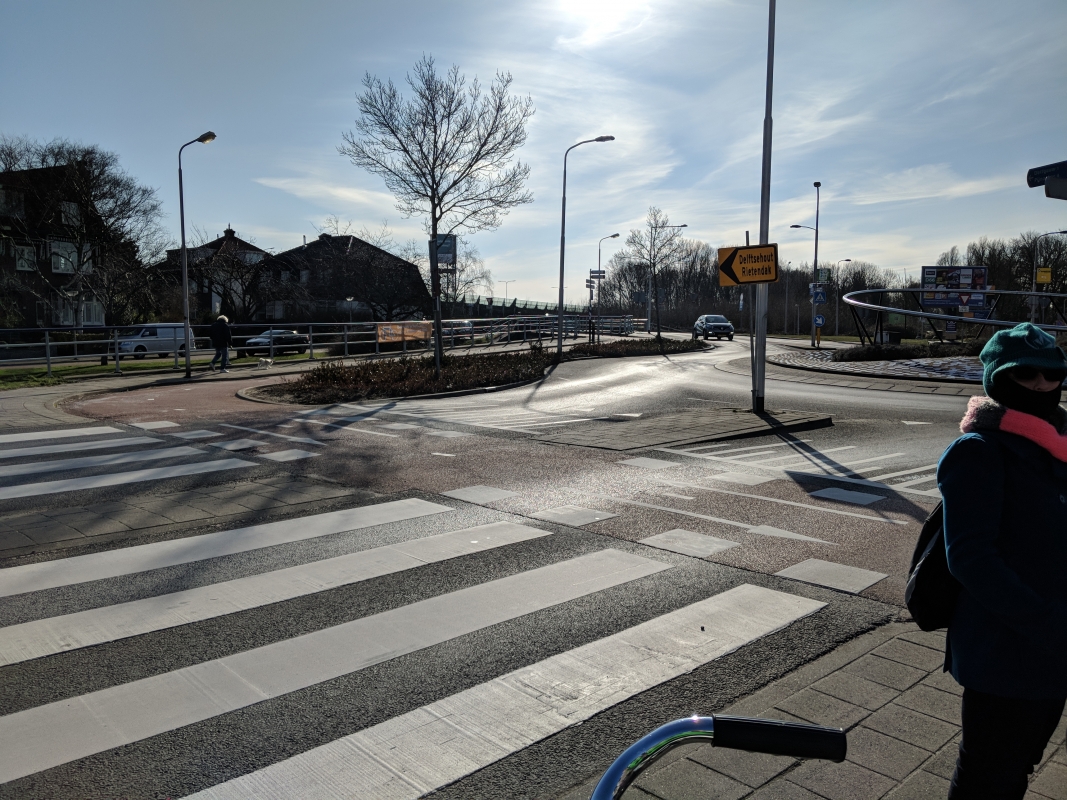 I do not know if this is the case but it seemed like the design standards allow slightly more customization that ours do – they might be less reliant on the manuals or more willing to work a little harder to find solutions that are well suited to the site-specific conditions. I don’t know if this is actually the case but this is what it seemed like. There were some turn lanes that measured just over 8.5 feet which probably would not fly in the united states even though there are a couple spots I can think of where these narrow lanes could be a good solution. On our tour we had the opportunity to see woonerf’s, cycle tracks, bike lanes, advisory bike lanes, grade separated intersections and several other installations of bike infrastructure that would be cutting edge in the united states.

Here, unlike in the united states, bicycles are given space in almost every location. There is a sense that the road is designed for all users and bicycles are even prioritized over other modes – walking included. While we were obviously biking on the bike paths and not the car paths, this seems to be consistent around the country.

The priority is, in my mind, a physical manifestation of the culture surrounding bicycles in the Netherlands – and perhaps the culture of the county in general (I have only spent a few days here and have been around primarily fellow transportation nerds so it’s hard to get a great read on the culture). Bicycling in this country seems to be a legitimate form of transportation that is used by all people – of all income levels. This view of bicycling influences the way they design their infrastructure. In other words, the culture dictates what sort of infrastructure is prioritized and how the vision is carried out. At first glance this seems to be a relatively basic conclusion to come to – however I think that there may be a bit of chicken and egg question going on here. While the culture certainly dictates the way infrastructure is built – it may also be possible that the culture itself is being influenced by the infrastructure. The idea of civil engineer as a culture influencer is certainly daunting – and not traditionally thought of in the engineering toolbox – but understanding they way it influences culture and vice versa may be helpful moving forward as I am hopefully one day delivering projects that bring us closer together as people and more efficient as humans.