Blog Post #4: State of Cycling in America vs the Netherlands

City Cycling, edited by John Pucher and Ralph Buehler, examines the “Cycling Renaissance” currently seen across America and elsewhere. The book portrays trends in cycling but also identifies what measures most effectively increase cycling levels, safety, and accessibility to all segments of society.

Chapter 2 is a broad overview of cycling trends compared from country to country. The difference truly is astounding, as shown by the figure below. 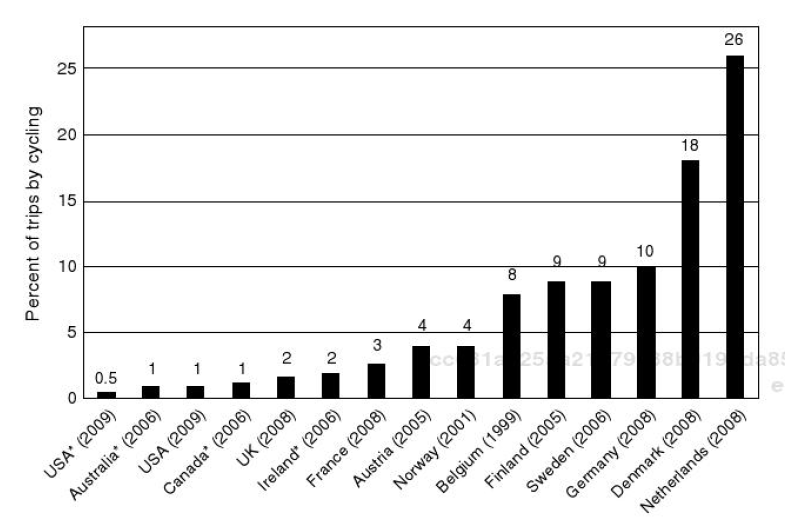 While all countries compared share a “Western” culture, the difference in the extremes of cycling utilization as a mode of transportation is stark. In fact, the major city in the United States with the largest share of cycling, Portland, has the same percentage of bike share of trips as Stuttgart, the major German city with the lowest share of bike trips. To bring things closer to home, in 2016, Atlanta saw just 1.4% of trips made by bicycle (cite). While this is above the US average, the number demonstrates the room for growth when compared with that of cities in Northern Europe, which can see as many as 40% of trips made by bike. Of interest, Atlanta has set a goal of 4% for the year 2030. Atlanta also has the longest average commute distance out of the top 96 metro areas in the United States with an average commute of 12.8 miles (cite). Longer trips are less likely to be completed using a bike, putting the Peach City in a tough spot. Chapter 2 of City Cycling also discusses the relationship of car ownership and cycling as a mode of transportation. Germany demonstrates that the two can go hand in hand, which surprised me due to my initial suppositions that the two would be in tension. In reality those in countries with high rates of cycling do not NEED to drive their car due to quality biking and public transportation systems. Additionally, countries such as Germany and the Netherlands educate school-age children in bike riding. This would be radical in the United States, which probably has an influence on the fatality rate that is five times higher than that of the Netherlands for cyclists. Looking at cycling facts, figures, and plans published by the Dutch government, one cannot help feeling that the Dutch love their bikes. This is validated by the fact that around 60% of the Dutch population associates the bike with “joy”.

As seen in the previous paragraph, the popularity of cycling varies greatly from country to country.  While there are many factors leading to this reality, a comparison of the cycling infrastructure will give a picture of the differing mentalities towards cycling. A major difference in the two approaches can be seen in the way bike and car traffic are treated in relation to one another. The United States has traditionally pushed to integrate both car and bike modes, leading to the commute warriors brave enough to cycle with cars flying by. In contrast, the European approach is to separate the two modes. Furth lays out a logical case for this approach: bikes do not contain crumple zones, airbags, or cage construction, while separating people from danger is a foundational to industrial safety. Combined with the lack of enjoyment resulting from traffic, separating the modes seems to be a rational conclusion. Yet the AASHTO bike guide demonstrates an aversion for separate facilities, claiming that faster riders would prefer a shoulder on a road to a protected facility. As one who often engages in sport cycling and is faster than the average biker, I cannot get enough protected facilities. In Georgia, the PATH Foundation has sponsored many separated facilities that I have enjoyed for both recreational and utilitarian purposes, ranging from the rails-to-trails Silver Comet to the essential PATH Parkway. While the slightly higher speed that I could experience on a road is nice, the chance of death generally dissuades me from choosing to mix with cars over other cyclists. Vehicular Cycling, or VC, is a concept that I had not been introduced to before this semester. The concept, that bikes should operate as a vehicle on the roads is certainly one I have brushed with, and I have often been instructed to “take the lane”. While this philosophy that separation hold danger has taken off in the past, the current trend in cities such as New York, Portland, and even Atlanta leads me to believe that this new generation of planners and designers take after the Northern European approach of separating the modes – an approach that has proven to increase safety and ridership. Stepping from the world of separated facilities to those of painted lines seemingly invites misconceptions and complications. Space required is often underestimated, leading to the danger of cyclists running into doors, while cars can easily invade the space through illegal parking. While bike lanes and the like seem to have legitimate applications, they are often placed on roads with too high of a volume, too high of a speed limit, and without enough buffer space.

Chapter 8 deals with the integration of cycling and public transportation and a comparison of this concept between North America and Europe. As a civil engineer specializing in transportation, I have learned some about public transit. As a Georgia native that has never been to Europe or Asia, however, the workings and benefits of buses and rail lines are still foreign to me. Due to this, chapter 8 was intriguing and witnessing quality public transportation remains an important interest as I look towards the trip to Holland. Theoretically, the combination of a highly accessible mode such as bike and a highly mobile mode such as transit has the capability to complement each other nicely, creating a great opportunity. Much of the section discusses the importance of secure and convenient parking in joint cycling-transit operations. For years, European nations like the Netherlands have invested in bike parking with proximity to rail stations and city centers where trips originate and end. This approach has led to the Netherlands holding space for more than 325,000 bike parking spaces at train stations, with more needed. The Dutch also maintain “bike stations” and “bike lockers”, facilities that offer top-notch security and convenience. In class we have seen pictures of such facilities, but I am interested to see them in real life and to witness their use by commuters. In contrast, the North American approach has trended towards allowing bikes on board buses and trains, with less of a focus on park-and-ride. Buses hold front racks (MARTA, Atlanta’s transit authority offers this service, but I rarely see it used), while in most cases bikes can be taken on board heavy rail. San Francisco trains have a dedicated car for bikes. Regardless, American systems are beginning to take notice of the European approach and are increasing capacity for bike park-and-ride. In both the Netherlands and the United States, bike share programs have become popular for their convenience and low cost. While often used for recreational use, bike share can be strategically placed at transit destinations to allow users to combine bike and transit without need for personal bike parking. In Atlanta, the Relay Bikes system offers bike rentals and has become relatively popular. OV-Fiets is the Dutch version, which has over 200 rental locations in railway stations. The integration of bike and transit networks also lags in the US, where an emphasis on recreational riding has neglected placing routes near transit hubs. To make things more difficult, transit networks are sparse, so that the incidental crossing of the two is rare. This is of course very different in the Netherlands.

Chapter 12 visits small cities in the US and Europe to discus the conditions and factors leading to strong cycling cultures in smaller settings outside of places such as New York or even Amsterdam. The cities studied were Davis, CA, Boulder, CO, along with Odense, Denmark and Delft, the Netherlands. The levels of infrastructure investment and cycling culture in Davis and Boulder are remarkable with the rest of the United States in mind. 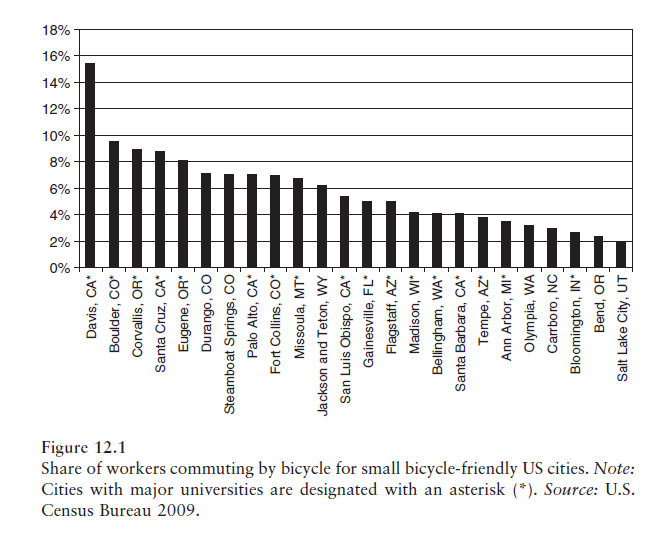 Davis in particular has a rate of bicycle commuting that would not be entirely out of place in Europe. With both US cities, it is interesting that cycling has been an emphasis long before the recent “bicycle renaissance” of the 21st century. The trend arose during the 80s or earlier as city officials sought to create communities resistant to urban sprawl that is accompanied by automobile dependence. Boulder officials acquired 43,000 acres of empty land surrounding the city to prevent sprawl. This brought to my mind the British Green Belt. In both cities the community seems to have developed a distinct cycling identity, a property that few large cities are able to grow with such wide success. Delft and Odense are both interesting case studies. While facilities were present and of high quality, public involvement campaigns made a large difference in the willingness of the populace to use bikes as a frequent mode of transportation in Odense, which intrigues me. This is also true but to a lesser extent with Delft. These cities demonstrate the public engagement factor of cycling as a mode of transportation, which should not be neglected.

As covered in the previous sections, small cities have unique opportunities when it comes to implementing cycling as a mode of transportation. While larger cities (over 1,000,000 people) must approach cycling slightly differently, there are still ways larger cities have found to implement a cycling culture. Large European cities such as Amsterdam are notable not just for their commitment to cycling, but for a history of such stretching back for decades. In America I am accustomed to new buzz about cycle tracks and paths, but to think that this has been going on for years elsewhere is incredible! The car restrictive policies cause my inner driver to cringe, but I know that they are implemented for the greater good. Additionally, reading of the progress made in cities such as Portland, Minneapolis, Washington, and others causes me to want to take a trip out to visit. Portland, in particular, is intriguing with the social aspect of an active biking community.

In conclusion, the Dutch approach of separating modes of transportation, integrating cycling and transit, and public engagement initiatives have led to a rich cycling society where 27% of trips are completed on bike. The decades of prioritizing cycling entrenched the bike into Dutch transportation philosophy and ensure the popularity of the mode in the future.