After completing the readings, I was constantly thinking of how I can implement policies similar to those in the Netherlands, Germany, and Denmark both in the U.S and in Kenya. I realized that even as a pedestrian, it is difficult to move around in the U.S. without a car. Numerous topics that were mentioned in the readings interested me. I was first surprised by the “Vehicular Cycling Theory” proposed by John Forester which opposes the separation of bicycles and motor vehicles. Additionally, I was impressed to learn that women account for the majority of cyclists in Copenhagen compared to men in the United States. It was also impressive that the Netherlands, Denmark, and Germany implement safe cycling courses in school. This way, starting from a young age, citizens are aware that pedestrians and cyclists are prioritized. Finally, it is interesting that there is really no correlation between wealth and cycling. In fact, the Dutch are affluent people and almost every household owns cars. I find that to be interesting because, in Kenya, there is a notion that cycling is for the working class, best explained by the quote “I’d rather cry at the back of your BMW than laugh at the back of your bike.” While the Dutch are more affluent and bike more than Kenyans, cycling is viewed as a symbol of poverty by many in Kenya.

In Europe, driver’s training courses emphasize the importance of protecting the vulnerable, who are seniors and children. In Western Europe specifically, it is expensive to get a license which costs about €1000 to €2000. In the U.S., on the other hand, it is cheap to get a license and the importance of not endangering cyclists and pedestrians is not stressed. In North America and Australia, speed limits in residential areas are much higher and traffic calming is limited to a few streets. It is also important to note that in both regions, the national government is responsible for funding, traffic regulations, and roadway and bikeway design standards while most cycling safety policies that increase cycling and make it safer are implemented at the local level. The standards set by the national government vary in content, level of detail, legal status, and financial commitment, and provide a vision that can guide lower levels of governments in their own effort. I think these differences are why cycling is thriving in some countries and struggling in others. Some countries are not specific and do not state quantifiable goals, while others such as the Netherlands are specific and thriving as shown below. 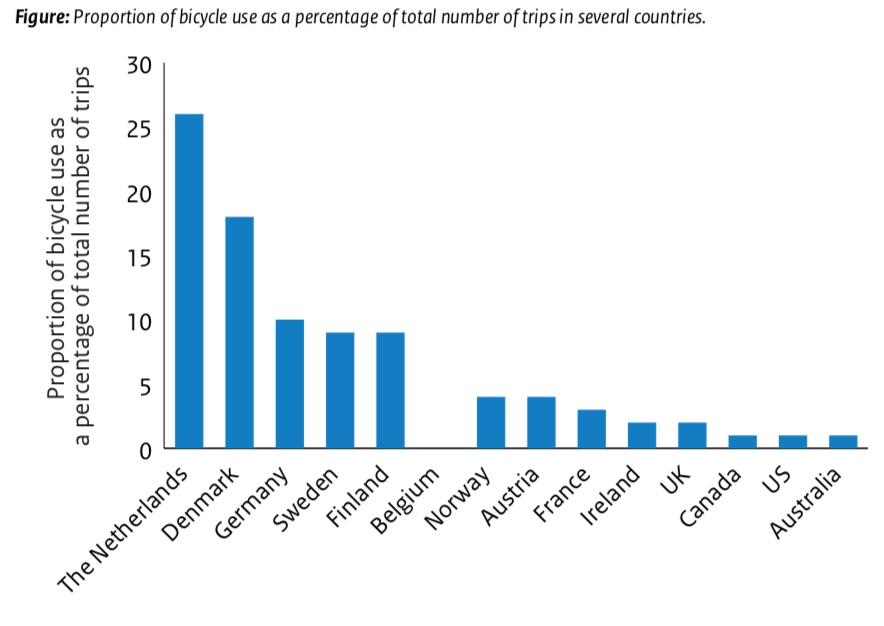 In the 1950s and 1960s in Europe, with an increased urban sprawl and increased motorization levels, there was less cycling. There was a heavy focus on expanding roadway and parking, which favored car use and thus saw a rise in environmental pollution, roadway congestion, and traffic injuries and fatalities. Therefore, policies changed to minimize car use and promote public transport, walking, and cycling. To further restrict car use, there are traffic-calmed neighborhoods, car-free zones, and raised taxes on car ownership, use, and parking. To educate the general public, bike training and safe cycling courses are taught in school for children. There are also information and promotional programs such as free printed bike maps, some of which are interactive and available online, that permit trip planning.

To be more bike-friendly, the Dutch expect physical separations as follows.

A Cycle track is expected on:

In mixed traffic, urban streets should have:

The biggest issue in the U.S. is that there lacks a separation criteria, which is what mostly defines Dutch cycling. There is no criteria for when cyclists should be separated and no limit to traffic speed or the number of lanes. In general, the government tends to prefer the lowest-cost solution. So the government would rather save money rather than make cycling safe so that more people may opt for cycling. This is probably why Forester proposed his theory, because if cyclists would not need lanes, then that means the government does not need to provide funding. According to his Vehicular Cycling Theory, separation causes greater risk except where there are no intersections. He suggests that it is safer to ride where motor vehicles ride because that is where motorists are going to look. However, this greatly ignores research that accounts for what has been implemented and works, especially in Europe. This also ignores data that suggests most people who would rather not cycle do not do so because they are traffic-intolerant and would rather not compete with motor vehicles on the road. It is also crucial to note that bicycles are not cars and therefore do not benefit from cage-construction, crumple zones, or airbags, which is why the safety of cyclists must really be considered.

In conclusion, the importance of cycling to the environment, health, and transportation is recognized and in order to achieve this, the masses must be appealed in addition to the traffic-tolerant. The greatest concern for cyclists is safety and comfort, which separation of motor-vehicle traffic and cyclists can achieve.

Since trends begin in urban areas, it may be beneficial to popularize cycling where it is not popular starting in urban areas, which also happen to be the places with the most vehicle traffic and more congested roads. Urban area are comprised of a greater mix of incomes, races/ethnicities, educational attainments, and lifestyles. However, outside Europe, cycling is not distributed evenly among different demographics.  For example, older people do not typically bike. Urban areas have more younger populations and economic and societal trends.

Cycling will help because it requires less space, which results in less congestion, less crowding during peak hours. Not only that, but bikes are less polluting and less noisy. Even though there will be greater competition for public transportation, people would have cycling as an option.