Blog Post 4: Design and Planning in America vs. the Netherlands

The readings presented a lot of ideas that were logical, and a few that made me double check the statistics. Cycling has been growing in most major cities since the turn of the century, but the Netherlands is on another level from the U.S. in terms of spending, use, and knowledge. The Dutch have figured out the most effective ways to balance motor traffic with cyclists and pedestrians, keep everyone safe, and incentive sustainable transportation. Americans are beginning to recognize the environmental and health benefits of cycling, but there is a long way to go before it is reasonably safe for all cyclists.

I was particularly surprised by the discussion of helmets in the safety chapter of City Cycling. Helmets have always been praised in the U.S. for making cycling safe, but safety really depends on infrastructure and separation from vehicles. Helmets are often used to compensate for a lack of cycling skill and people are more likely to take safety risks when wearing them. Laws enforcing helmet use do more to reduce cycling than reduce head injuries, which ultimately makes cycling less safe (Pucher 2012). I will continue to wear a helmet when cycling in the U.S., but I am looking forward to cycling without one in the Netherlands and feeling the difference.

Differences Between Netherlands and U.S.

John Forester’s vehicular cycling policy has set back American cycling infrastructure as the Dutch have excelled and developed. Forester convinced Americans that cyclists are most safe when they act as and are treated as vehicles because that is how drivers notice them (Pucher 2012). The Netherlands has proven the opposite, with greater safety for cyclists when they are separated from cars, especially at high speeds. The Dutch separate cyclists from cars on any road above 20 mph, and they have the highest use and lowest injury rates of any country in the world (Pucher 2012). The figure below shows the percentage of trips taken by bicycle for several countries, and the Netherlands leads the pack by a comfortable margin (Harms 2018). The American Association of State Highway and Transportation Officials (AASHTO), still does not endorse or aid in the design of separated bike paths. Some U.S. cities have taken advice from the Dutch, and incorporated cycle tracks and separated paths into their biking networks. The National Association of City Transportation Officials (NACTO) has released an Urban Bikeway Design Manual with specific guidance for U.S. cities attempting to design Dutch-style cycle infrastructure (Pucher 2012). 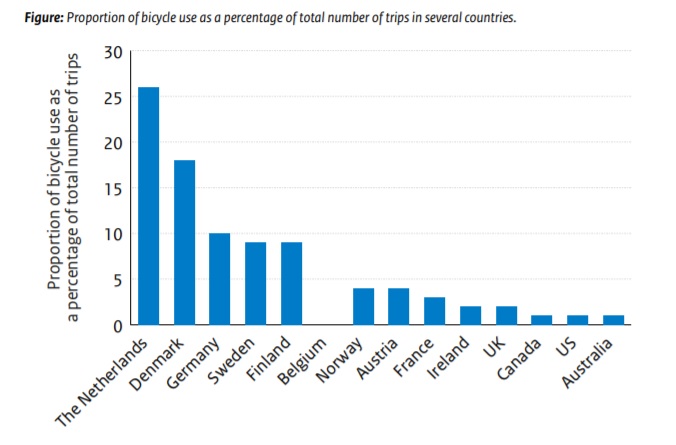 There are also striking differences in bicycle-related policy between the United States and the Netherlands. Schools in the Netherlands provide safe cycling training for children so that they know how to interact with other travelers and interpret road signs. Dutch driver education also covers interactions with cyclists and pedestrians and makes vulnerable modes of travel a priority. Such programs in the U.S. focus only on the drivers and their safety in relation to other drivers. The Netherlands also has laws that make drivers responsible for all collisions with children and elderly cyclists (Pucher 2012). People of all ages and abilities ride bikes in the Netherlands because of their safe systems, as opposed to the U.S. where most cyclists are fit adult males. Government spending on cycling is also much higher in the Netherlands. Portland, one of the most pro-cycling cities in America, spends about 10 times less per resident per year than Amsterdam (Pucher 2012).

The Dutch have created a beautiful model for how cycling can help a country. A switch from cars to bikes decreases air and noise pollution, makes people healthier, and costs less for infrastructure than cars. American cities are beginning to recognize the importance of cycling and incorporate Dutch systems into new infrastructure projects, but many areas of the country still have poor or no cycling systems. There will need to be a cultural shift, a dedication to funding, and most importantly an acceptance of Dutch methods in the United States. Many Americans will likely retaliate against increased taxes on drivers, reduced travel speeds, and more space dedicated to cycling, but it is important to consider the greater good and the long-term benefits of increased cycling. If the U.S. dedicates time and money to cycling, they could slowly approach Dutch levels of sustainability in transportation.