Bike facilities in Atlanta do not make me feel comfortable about biking in Atlanta. It makes sense why “you are 30 times more likely to get injured in the U.S. than you are in the Netherlands,” according to Wagenbuur (2011). In Atlanta, bike safety does not seem to be a priority, hence why bike lanes have not been implemented on every street and cars may park next to, or on, bike lanes with door zones not being flexible with cyclists. Where bike lanes are, they are not completely separated from vehicle lanes. There are bike lanes, literally lines drawn on the road, but no physical boundaries. This is especially noticeable in the city. At one instance while on the bike tour, I felt as if vehicles turning right would hit me. There are some locations that we biked through in the city that I felt safe, like the one depicted in Figure 1 below, due to the bike lane that is clearly separated from vehicle traffic. In Midtown and other parts outside Downtown (ie: 10thStreet), on the other hand, bike facilities are more accommodating to cyclists. Multiple factors, such as quiet neighborhoods and designated bike lanes with physical boundaries, may contribute to this factor. More specifically, Georgia Tech is more accommodating to cyclists with Ferst Drive having a bike lane along the entire path. As shown in Figure 2 below, 10thstreet is also accommodating. While on the bike tour, I did not have any fears relating to biking while cycling down 10thstreet and into the Beltine. In general, I doubt that most people would feel comfortable cycling around Atlanta’s infrastructure, especially in the city. The Georgia Tech campus and Midtown are exceptions, however. 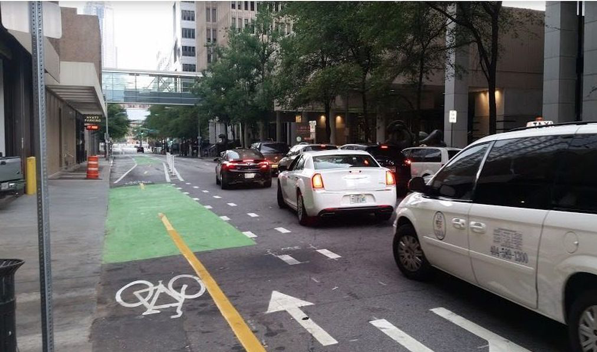 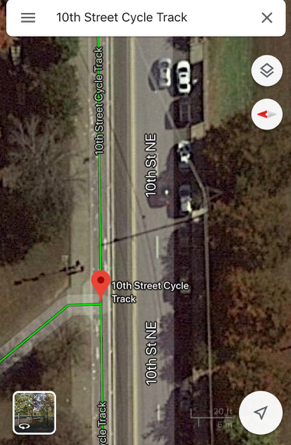 In the U.S., cycling is viewed as an activity for children or as a leisure activity. In fact, people carry their bikes on their cars in order to get to their destination. Meanwhile, in the Netherlands, cycling is perceived as the primary mode of transportation, whether transporting children to school, heading to a business meeting, paying a friend a visit, or going on a date. In the Netherlands, there is no specific bike gear, one can wear whatever one wishes, as biking is not a leisure activity, but a reliable mode of transportation for a person of any age. Additionally, in the Netherlands, it does not seem as if bikes are compete with traffic or as if cars invade bike lanes, as cyclists are prioritized. In fact, vehicles may be seen as “guests,” as mentioned by Dr. Watkins in lecture. Compared to the U.S., it may take a cyclist a shorter amount of time to reach a destination than a vehicle driver as roads are meant to be accommodating to cyclists. In most countries, at crossings, first the car lanes are drawn followed by bike lanes that cause bikers to cycle as fast as possible, which is where protective islands emerged from. Junctions are designed in this way so that cyclists do not mix with vehicles, causing accidents and injuries. However, roundabouts are more common in the Netherlands as they have proven to be safer for cyclists. Cycle tracks can be placed all around them, prioritizing cyclists and making traffic flow better. Additionally, they slow down motor vehicles, making them safer for the environment as well, as they minimize noise pollution (Wagenbuur, 2014).

After WWII, the Dutch had to rebuild their country. They became an extremely wealthy people and plenty of people started owning cars. There were so many cars on the road that buildings had to be demolished for parking. As the number of cars on the road increased, the number of bikes decreased, and accidents saw a rise. The Prime Minister advised that Sundays become car-free to raise awareness that cars were decreasing quality of life. For example, over 3300 people, of which more than 400 were children, died in 1971. (Wagenbuur, 2011). After all, bicycles were welcomed and cycle lanes were welcomed. Therefore, in my opinion, cycling infrastructure developed in the Netherlands due to the amount of space that cars required, and more importantly due to the number of children (more than 400 per year vs. 14 in 2010 - Wagenbuur 2011) that died because of being hit by cars. People were angry and outraged and wanted change. They wanted an alternative mode of transport, especially one that would not rob them of their loved ones.

In the U.S., on the other hand, many cities have been influenced by Davis, California (Schmitt, 2018), and other international cities to adopt bike lanes and be bike-friendly cities. Additionally, even though bikes are not as expensive as cars, bike lanes are more common in wealthier neighborhoods and near the beach. This is probably related to the fact that, in the U.S., cycling is viewed as a leisure activity. Additionally, in my opinion, biking is seeing a rise, especially in younger people, because of the need to keep healthy and stay fit.