The Atlanta cycling tour was an amazing learning experience to prepare for the Netherlands.

I was surprised at how comfortable I felt bicycling on the Atlanta roads; I imagined mass chaos trying to weave through traffic on major streets, but was taken aback at the amount of infrastructure already in place that separated cyclists – whether it be the cycling tracks downtown, or the completely bike-friendly Beltline (ironically, I was less comfortable with my actual bike than the paths – shoutout to Liston and Nick for fixing it multiple times on the trip). My favorite portion was the cycle track on 10thStreet, seen in Figure 1 – the strategic placement on the Piedmont Park side, integration by lane reduction, and barrier protection all attributed to this. My least favorite section was along Edgewood Avenue, as shown in Figure 2, where the bike lane felt more like an afterthought. It would appear that the automobile lanes were just made more narrow to fit a bike lane, but this offers no protection or real benefits to cyclists. 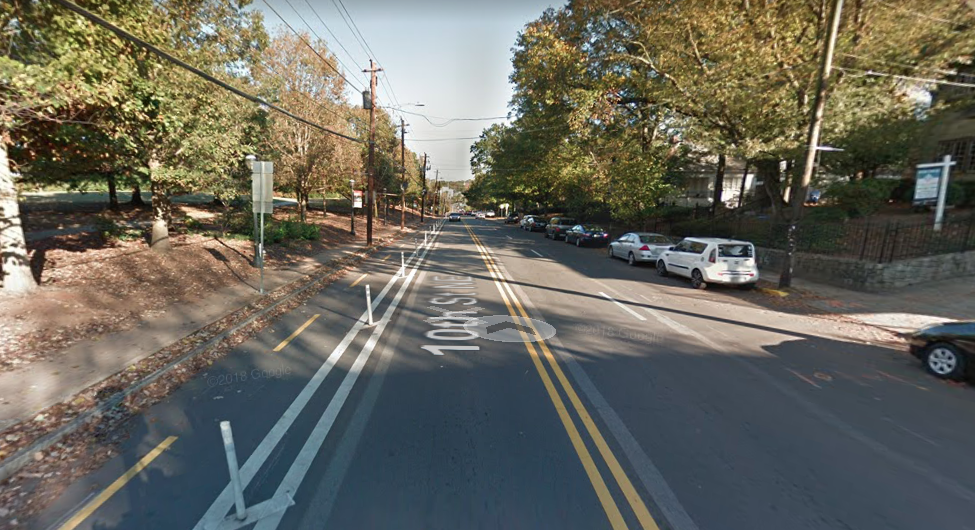 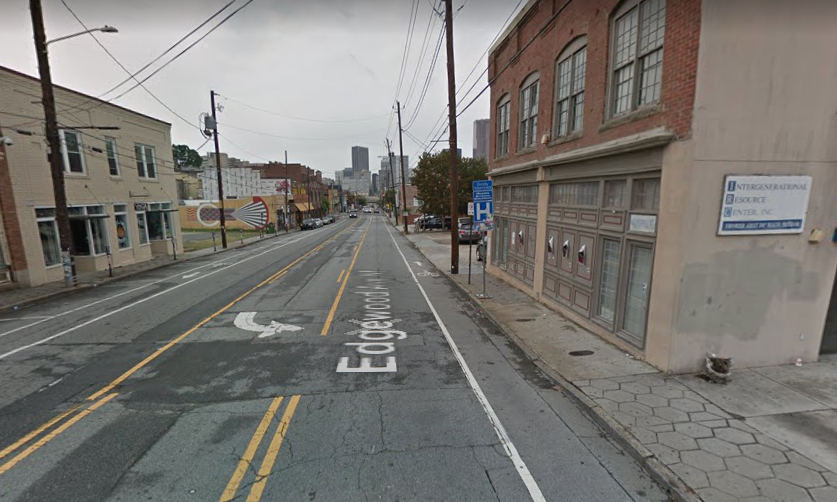 Though I felt fine, I am assuming this is not the case for most. One reason I believe bicycling has not taken off in Atlanta is the lack of uniformity in already present infrastructure – in a short stretch of about 1.5 miles downtown, the infrastructure quickly shifted from dedicated bike lane to cycle track to a trail on sidewalk, then back to dedicated bike lane (seen in Figure 3). I am highly doubtful of my success without the aid from more experienced cyclists in the group who were aware of the changes and how to interact with the different roadway elements. If the infrastructure had a more uniform design, less experienced cyclists would have more confidence in navigating through the city. As the Beltline continues to form and branch out into other paths, I do believe that Atlanta will be able to develop a unique and fluid infrastructure style. 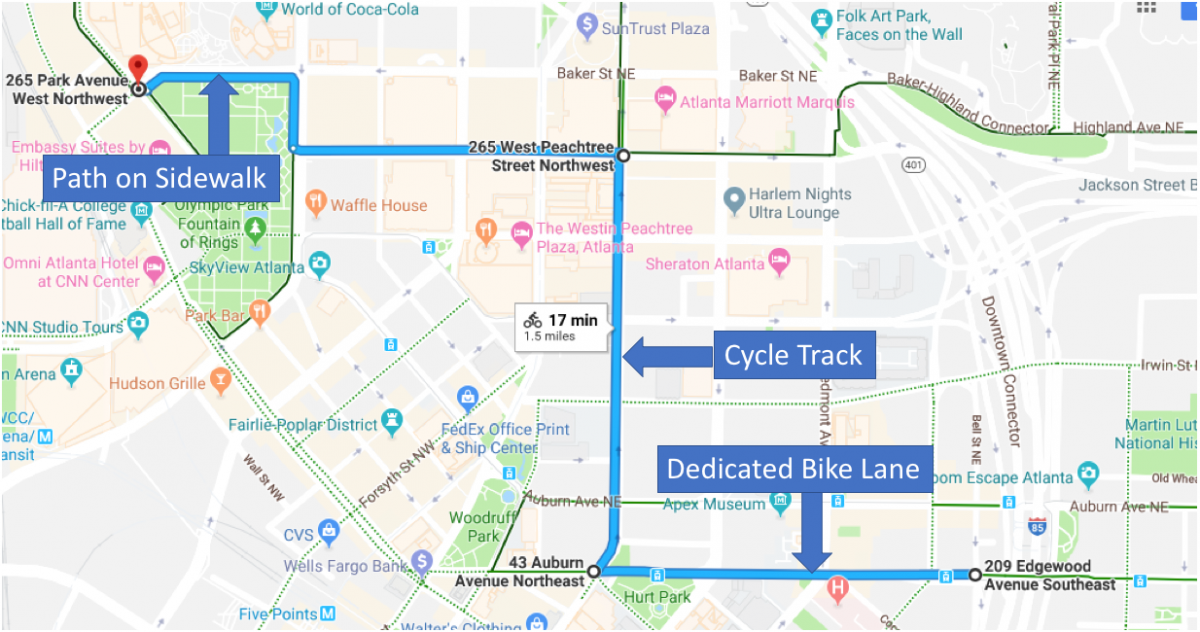 Cycling in the Netherlands is a completely different story compared to Atlanta and the US. While cycling in America is expressly for the brave and bold, or simply as an activity, Dutch bicycling is for all and means to serve a purpose – to actually get from point A to B.

For one, the demographic of cyclists is quite diverse – both young and old, and of very different social types; this is very different than in Atlanta, where there has become a bike-to-work stereotype. Dutch bikers dress in normal/work clothes and this biking is clearly for purpose, not leisure. The style of bike used complements well to the city environment – no speeds, or mountain biking styles – just a simple design that matches the flat terrain of the country (Wagenburr, 2010).

In the traditional Dutch intersection, the use of the all green signal timing phase for bikers gives bikers the ability to make left turns without intersecting with the flow of automobiles. This gives motorists incentive to switch to biking – for a shorter waiting time at intersections. Giving cyclists priority over motorists at roundabouts increases safety, and allows for cyclists to get through the roundabout as quickly as possible. I think the space between motor lane and bike lane, where a car can wait out of traffic, is especially intuitive, as it maintains the ease of travel for cyclists without sacrificing the experience for the motorists (Wagenburr, 2014).

I can attribute the differences in cycling infrastructure to three major reasons:

The Dutch terrain is notoriously flat, due to the rich history of dredging in the country. Paired with the fairly mild climate, Dutch cycling is both comfortable and enjoyable. There are many locations in America where city cycling is not evidently practical – more innovative solutions will be required to popularize cycling. The Netherlands and US handled the oil and economic crisis quite differently – while the Dutch seeked out alternate modes of transportation (cycling), the US focused more heavily on automobile usage and efficiency; thus the Dutch developed a more extensive non-automobile network (Wagenburr, 2011).

Cycling in the US is not taken seriously, more for fast-paced leisure and sport. This has to do with the culture of the US, being mainly car based, and their inability yet to view biking as an equally efficient mode of transportation, to actually get from point A to B. This lack of seriousness towards biking corresponded to the Dutch narrator’s frustration in the deficiency of proper biking infrastructure. Instead of catering to the needs and requirements of bicyclists, bike lanes in the US generally give the impression that bikers in the US are a secondary class road user, which should not be true. The narrator remained hopeful for the future of US biking, seeing infrastructure improvements like more curbs, bike racks, and bike shops, as well as bike sharing options, that will allow for the greater universality of biking in the US.  Beyond infrastructure improvements however, cultural improvements are needed to ensure road users understand that cycling is meant for purpose, much more than just sport (Wagenburr, 2013).

Bike-related deaths seemed to not be at the forefront of US news and opinions; the Dutch really valued life and safety in this situation, and for the 1970s, I find this extremely revolutionary (Wagenburr, 2011). Conversely though, it has been evident in all of the videos that the Dutch do not wear helmets while biking – while this is completely understandable for adults, there is concern for young children. It feels very dangerous not giving them helmets, or some other form of protection; based on their location on the bicycles, if a crash were to occur, the child would be in a zone of particular concern for injury (Wagenburr, 2015). 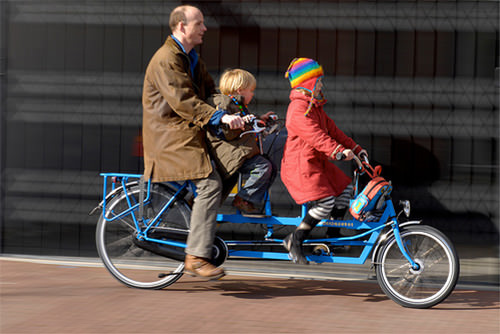