Prior to learning about bike infrastructure in the few weeks of this course thus far, I was oblivious to the plight of cyclists within Atlanta; I did not perceive our infrastructure to be lacking or proficient, but instead, never gave it a second thought. After the group cycling tour of Atlanta, I have a much better idea of how cyclists operate and what concerns could arise. The tour began on 5th Street, where a "Sharrow" exists, designating that cars and cyclists must share the road.  Starting off weaving through small, quiet neighborhoods on Myrtle Street, even inexperienced cyclists would feel safe despite any striping or markings indicating cyclists’ presence, as cars were cautious and scarce. Figure 1 shows the lack of striping on this road. 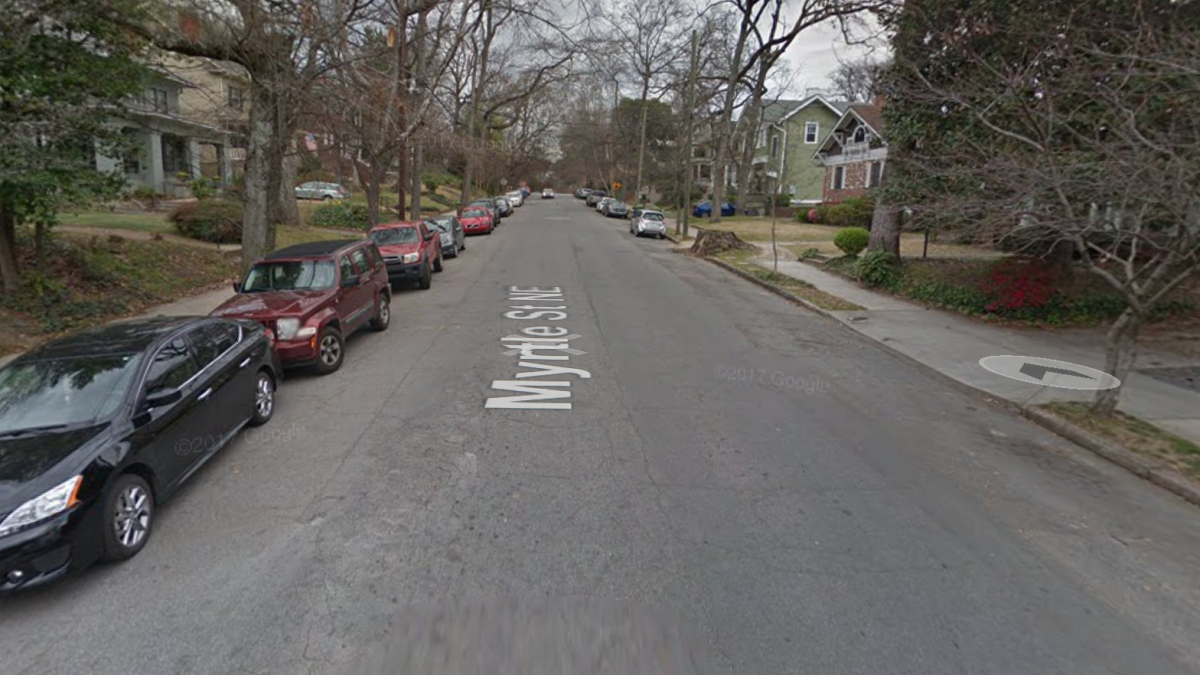 Reaching 10thstreet, I became aware of the second type of cycling infrastructure I would encounter: a two-lane cycle track.  I felt secure up until reaching Monroe, when I was the first one at a busy intersection, as the rest of the group before me had gone through the light. I asked someone to go ahead of me as we approached the Beltline, as I was nervous to be the first one through the intersection. This unique configuration is shown in Figure 2. 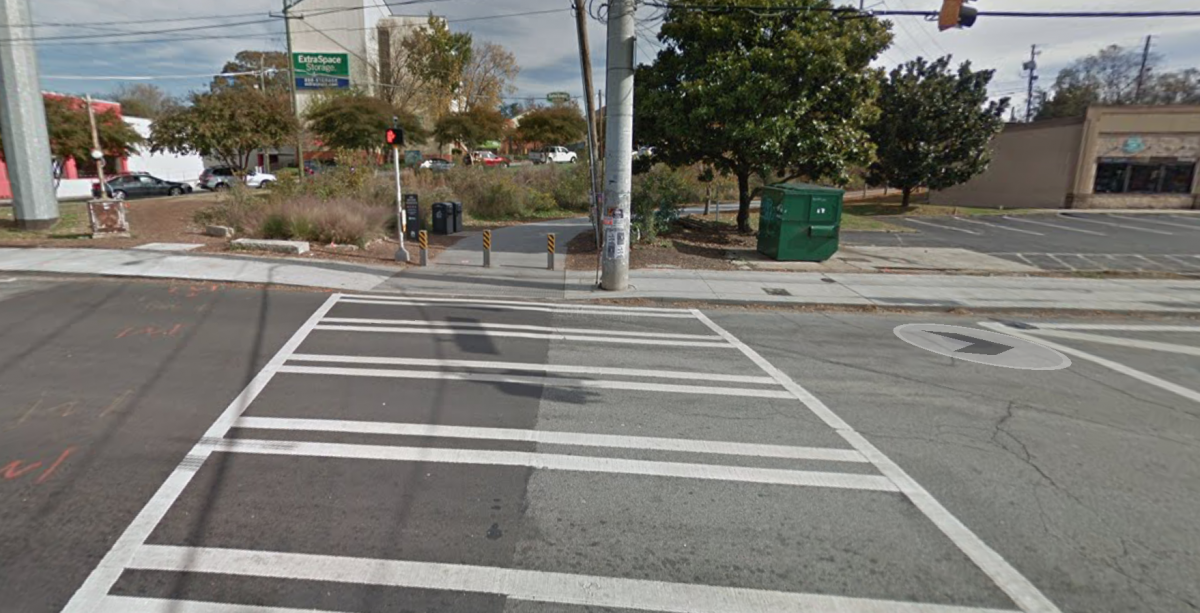 The Beltline would be considered a safe haven for a cyclist on days without considerable foot (or scooter) traffic, with wide paths and no automobiles. Transitioning to biking on Edgewood, where a cycle lane exists, I felt comfortable but I can attribute this partly to being at the front of the group right behind Dr. Watkins; I never quickly had to question if I should continue through a light at a yellow. I noticed on Edgewood that some oversized cars or trucks would come close to me. I can only imagine that had I been alone, this scary moment would have been amplified. The group tended to get fragmented because of drivers making turns without looking and lights changing. Finishing the tour once the group dispersed, I continued onto the Path Parkway by mself, and again felt very safe, as it is detached from the cars’ roadway. Figure 3 shows the end of my journey, to which I returned to the safety of campus roads. 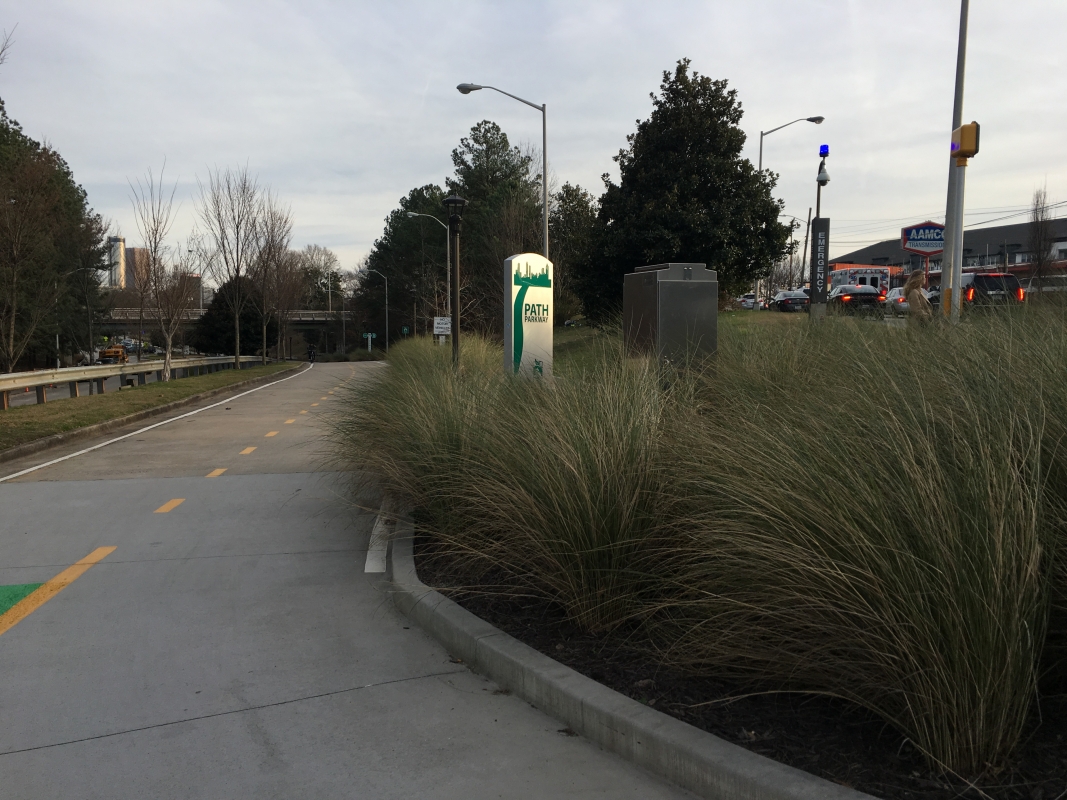 The paths traversed on the group cycling tour were the best Atlanta has to offer. Had the tour took place on 10thStreet west of I-85, I am sure my experience would have been far more frightening. Cycling with a sizable group filled with mostly experienced cyclists was a source of comfort, however my experience would have certainly been different had I been alone or if the automobile traffic had been worse, with impatient and mindless drivers. Without a doubt, Atlanta’s infrastructure has seen considerable improvement in the past few years, and even within the past couple of months, such as the new cycle track that continues on by the Georgia Aquarium.

Despite the recent strides made in adding cycling infrastructure to American roads, it still feels like roads with bicycling infrastructure are a rare privilege. The Dutch emphasize cyclists as the priority user rather than an afterthought. As for their infrastructure, elevated paths distinguish between different roadway users and makes cycling and walking far safer (Wagenbuur 2009). In Atlanta, our group could not stay together because of frequent stops, and because of added cautionary time, since cars were not looking for cyclists. The Dutch system allows for more seamless transportation, where cars are respectful of cyclists and cyclists can ride without being anxious of drivers’ impedance (Wagenbuur 2010). At intersections especially, cyclists have minimal interaction with cars, which is safer and more efficient than the American version (Wagenbuur 2014). This is possible through overpasses, underpasses, different elevation levels of roadways, and smart left turn design. Lights control the intersections, allowing trains, buses, cyclists, and pedestrians to each have their turn. Beyond the physical infrastructure, the demographic of cyclists is different. While biking throughout Atlanta, every cyclist we encountered was a male. In the Netherlands, women of all ages, shapes, and sizes bike to and from work just as men do (Wagenbuur 2015). Their infrastructure allows for almost anyone to use the paths safely and effectively, getting from one point to the next. The Dutch are so confident that their paths are safe that almost no one videoed had a helmet on (Wagenbuur 2009). Another interesting note is that, while in the States, many people reserve biking as a recreation activity for sunny days, the Dutch bike in the snow, rain, and cold temperatures. Simply put, the Dutch do not let much come between them and their ability to cycle to and from.

There is no argument that Dutch infrastructure provides a safe way to bike. The Netherlands’ lucrative past combined with many cycling deaths paved the way for cycle paths from big cities to smaller towns (Wagenbuur 2011). I agree that American cities have a long way to go with respect to achieving that same level of comfort, availability, and feasibility. However, I believe that, in the future, the American cyclist can choose to bike to and from work, social events, restaurants, and commercial areas (like the Dutch do) without American governments needing to completely revamp the elevation of roadways and model our cities like Dutch cities. Changing the infrastructure would of course be ideal, and the same quote, “Build it and they will come,” would eventually apply (Wagenbuur 2011). However, for the time being, the population of car drivers in the United States needs to change their mindsets about the role of cyclists on the roads. My experience biking on Atlanta’s infrastructure was reassuring and motivating, however I am sure that if I biked daily, I would have more dangerous interactions and perhaps change my current thinking that our infrastructure does not need to be completely changed.