The best way that the Dutch integrate transit and bikes is by providing end-of-trip facilities (like thousands of bike parking spots) and bike rentals at train stations. These types of amenities not only encourage cycling to and from transit, but also make traveling by bike and transit easy and efficient. Parking a bike and hopping on the train is an almost seamless process. Bike parking facilities are located just steps away from the fare gates for the train. Bike parking is generally free at most transit stations, so cyclists do not have to worry about paying for parking before getting on the train.

The image below shows the bike parking facility at the Delft train station in South Holland. The rows are wide and numbered, making it easy for cyclists to cruise around to find an open spot and also to remember where they parked. Additionally, by providing multi-leveled bike parking the use of the space is maximized. Although less common to see in the Netherlands, bikes are permitted on board the train after purchasing a ticket for your bike. The majority of riders who bring their bikes on trains are those with folding bikes or road bikes (for cyclists riding for exercise). There are designated boarding doors for bikes and passengers with luggage. These areas provide extra space for cyclists to stand with their bikes. 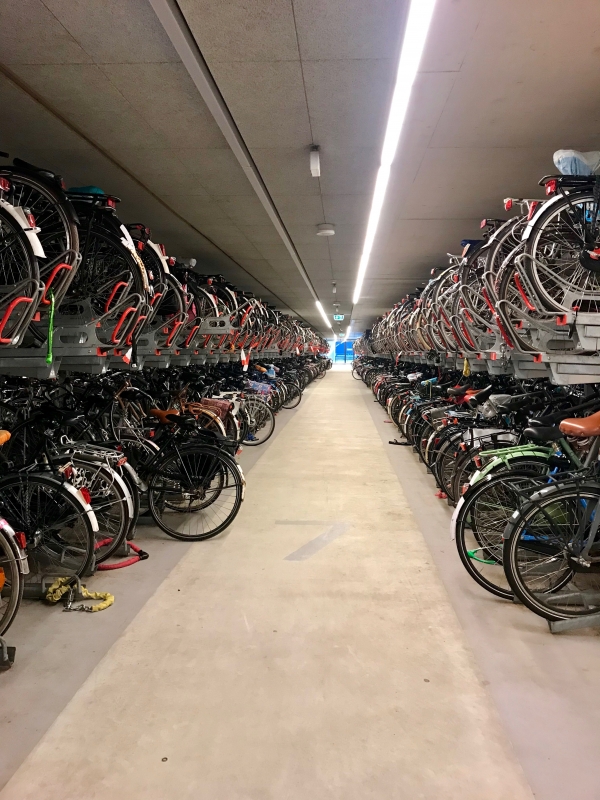 In measuring transit performance, the Dutch look at the speed and reliability of the system. They assign values to the measurements by using a 1 to 10 scale, with 1 being the worst and 10 being the best. These evaluations of the transit system are completed every six months, so as to track progress in maintaining or improving speed and reliability. The Dutch focus on making transit more reliable and responsive by focusing on the level of separation between the train and other modes of transportation. The term “right-of-way” in transit is used to classify the level of separation a vehicle receives. Right-of-way ‘A‘ is transit that is physically separated and results in fewer delays and increased priority for the trains. This is the right-of-way level the Dutch seem to strive to achieve for their transit lines. They understand that the decreased number of interactions their trains make with other vehicles and modes will help increase the speed and reliability of the system.