Just like Ferst Drive surrounds Georgia Tech with minimal car access to the center of campus, Houten manages to limit access to its city center but still maintains mobility by using a “ring road.” Houten has developed an intricate system of bike paths and public spaces that is accessible by car but gives priority to cyclists. Within the outer ring are two city centers, two train stations, multiple shops and grocery stores, as well as residential areas and green space. They have managed to create a safe space, especially for cyclists and children as they can easily get to and from school along any of the major cycling routes across town. This concept is really interesting because it provides the ultimate form of the suburban lifestyle, offering a safe and quiet space to live, with all modern conveniences, but still with access to major highways and public transit. Their idea is to provide access to all modes but to ensure that cyclists have the most efficient and direct route possible. Although bike transit seems like it would be the most used form of transportation within the city, it also ensures that cars can exit the city for outside jobs and tasks.

Although Ferst Drive surrounds Georgia Tech much like the ring road surrounds Houten, Georgia Tech’s campus is much smaller and operates on a much smaller scale city with very specific purposes. However, this is probably one of the closer examples in the US that could potentially be compared to Houten. Another form of a planned community near Atlanta could be Serenbe Farms. Serenbe makes use of the farmland to grow sustainably produced fruits and vegetables and provides reprieve from the congestion of city life. This way of life is incredibly different from the rest of America, where choice and ownership is often valued over anything else. As small examples of these communities already exist in the US, I don’t think it’s unreasonable for this type of planning to be implemented, however I understand why they do not exist on a large scale. American suburbs developed as a means of escaping the city and rely heavily on the steady structure of the American highway system. Bicycles are not a major mode of transportation nor is public transit. This provides a hole in the system, where there is not already widespread use of bicycle facilities, it is difficult to not only create a system from scratch but also to take away a previously established car network. It’d be great to implement pieces of Houten in American cities to promote safer cycling and maybe to help create a more integrated system. Below shows the roundabout that could be a potential option for implementation in the US because it maintains vehicular traffic flow while still ensuring safety and mobility on bike. 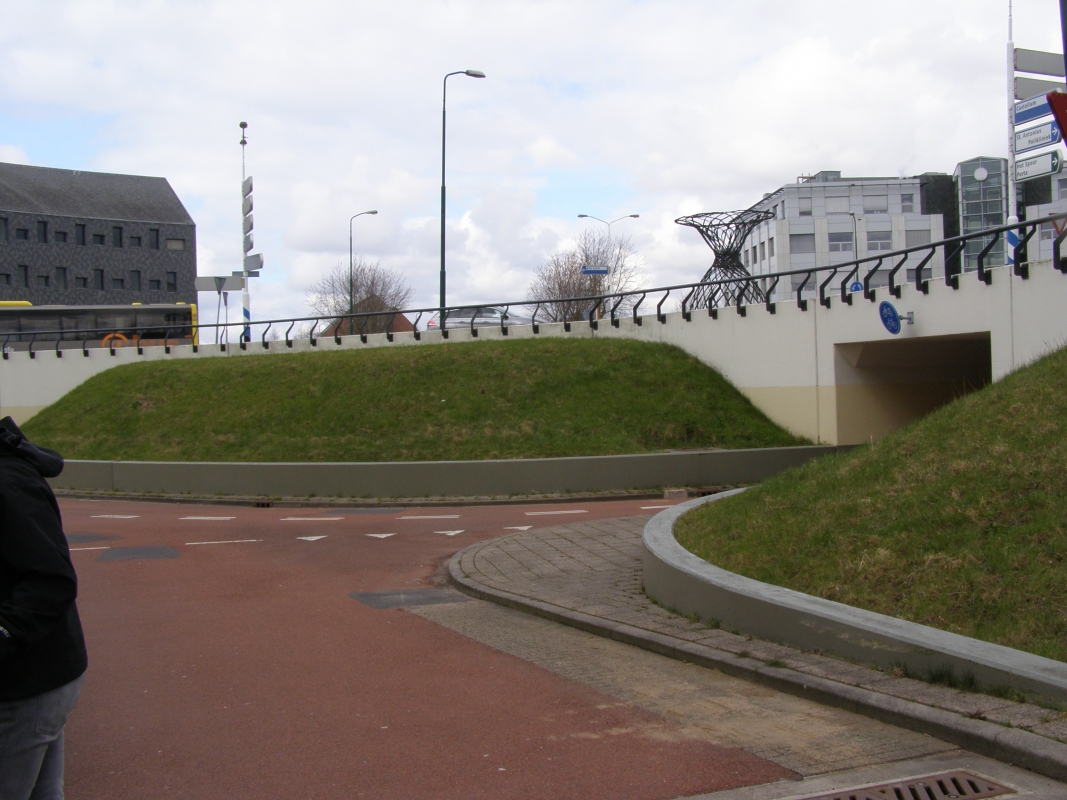 One corner of a roundabout with the cycle track running beneath the roadway.