Blog #2: Atlanta and The Netherlands

Atlanta is home to many great things – unfortunately, a robust bicycle network is not one of those things – though it is improving. As a class we had a chance to take a tour of some of the bicycle infrastructure that Atlanta has to offer. These included the Beltline, Cycle Tracks, and Bike Lanes. These are certainly the highlights, on my normal commute I have to spend about a mile on a stretch of road that that has none of these facilities.

I would like to preface my review opinions of the cycle facilities by saying that I fall somewhere between “Strong and Fearless” and “Enthused and Confident” as described by Roger Geller, Bicycle Coordinator for the Portland Office of Transportation.

Overall I find bicycling in Atlanta to be a fairly bikable city, I rarely feel scared or threatened as a cyclist in the city – this is not to say that cars are terribly accommodating in the city – But I frequently commute to work, restaurants or parks as a part of my daily life in Atlanta. It certainly helps that I live a half a mile from the Atlanta Beltline. The following pictures show these fabulous bicyclic facilities: 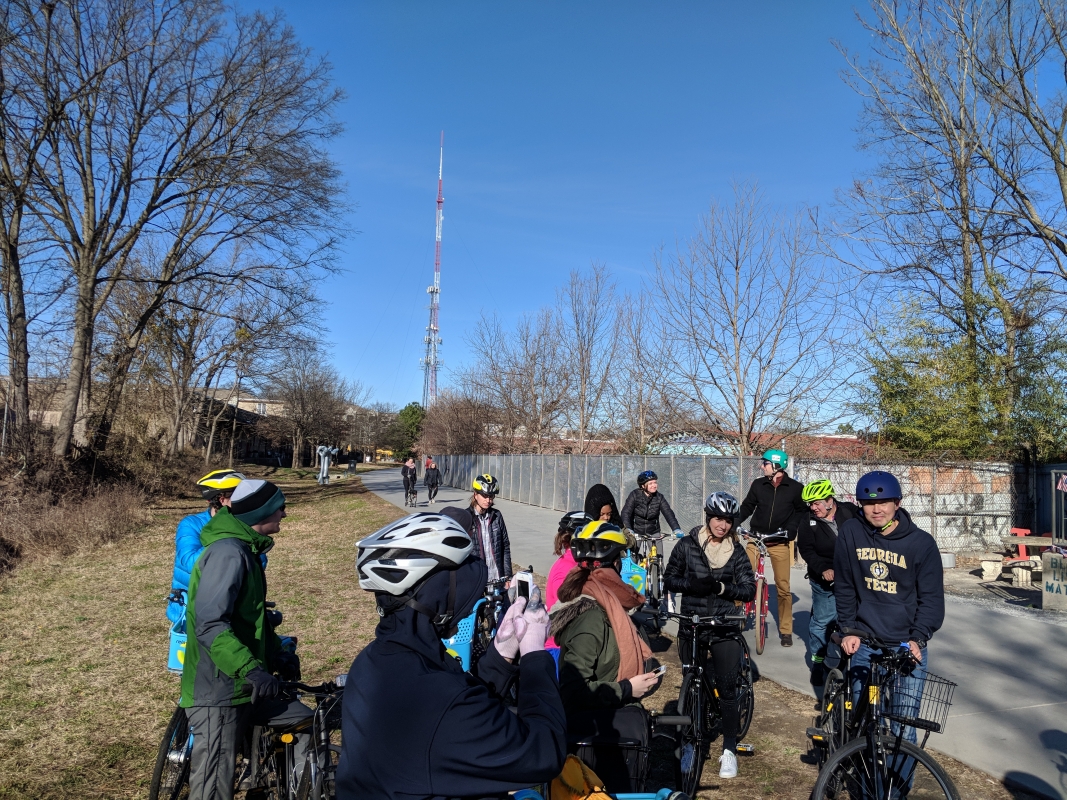 One of the things that make Atlanta Bikable to me is that I have built my habits around bicycling and riding transit in the city. This is one big difference between a city like Atlanta and cities in the Netherlands that are described in the videos. While I feel comfortable biking in Atlanta, it required me to make decisions regarding work and home to put myself in a position to access reasonable bicycle infrastructure. Atlanta certainly has a long way to go in both the physical implementation and behavioral changes to the Atlanta car drives before the city will truly be bicycle friends, but from my perspective I currently enjoy the city and am looking forward to the city continue to improve facilities.

The videos on the bicycle infrastructure In the Netherlands are inspiring – as well as disheartening at the same time. The facilities they have are truly world class, and certainly elicit a hint of jealousy. I found the history of the system particular interesting – as a planning student this process is particularly interesting. The political process by which this system came to be is inspiring. IT makes me wonder if such an undertaking would be possible on a regional or state level in the USA give the polarizing political climate and the propensity to label bike lanes as “Liberal” Ideas.

The idea of a bicycle traffic jam, while common on the beltline is a foreign concept during a morning rush hour as we saw in Utrecht. The history of the Amsterdamsestraatweg is also compelling – as the form of the street was switch several times to accommodate cars, pedestrians and bicycles.

My concluding thought comparing the two models is that Atlanta certainly has a long way to go, and even though some (including myself) feel comfortable riding in the city, we have a long way to go to include the rest of the population into the bicycling world. I am excited to continue to learn in this class and hopefully be in a positon to make decision that impact the future of bicycling in the city.