Last Tuesday, we biked around Atlanta. Going into the tour my expectations were ridiculously know. I know how Atlanta drivers treat pedestrians and figured they would treat cyclists even worse. Surprisingly, Atlanta’s bike infrastructure exceeded my rock-bottom expectations, but that is not saying much. Atlanta can still take steps to improve cycling safety and efficiency.

Leaving Georgia Tech to go to Piedmont park, displayed the differences of bike infrastructure in Atlanta. It started out with simply sharrows—arrows that simply display that drivers are supposed to share the road with cyclists. Sharrows made me the most uncomfortable throughout the trip, I felt like I always needed to peek over my shoulder to make sure a car wasn’t sneaking up behind me. The conditions also felt cramped with parked cars to the right of me while cycling.

The bike infrastructure improved closer to Piedmont with bike lanes next to the roadway, and then even “protected” bike lanes next to Piedmont. The bike lanes were only protected by plastic rods, that are an eyesore, but still made me more comfortable than an ordinary bike lane. The rectangular interchange on the way to Piedmont in my opinion is more effective than the interchange next to the Midtown Marta Station. I’ve seen pedestrians press the walk signal, almost enter a cross walk, then have a car cut them off. At the interchange on the way to Piedmont the cars stopped immediately and we could cross. This difference could be due to time of day, since it wasn’t rush hour yet while biking but was when the pedestrian crossed. Also, it could have been due to expectancy, since bikers are more likely bike around Piedmont cars may be accustomed to it. I usually do not see people use the crosswalk near the Marta Station.

The place where I felt the most comfortable throughout the whole trip was the BeltLine. Being a mixed-use path, there were no cars to worry about. The art on the BeltLine also made the ride visually pleasing. Ponce City Market even had a large (by Atlanta standards) area to park your bike. While the BeltLine is much busier on the weekends, I would still be more comfortable than sharing the road with cars. 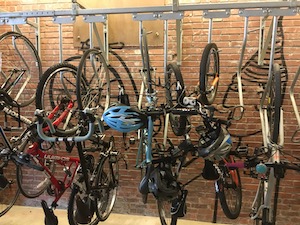 After the BeltLine, biking towards the MLK center and streetcar area made me the most uncomfortable. I’m not sure what the speed limit is on the road, but it felt much faster than the rest of the trip. While there was a bike lane, it was unprotected and only seemed to be about 4 feet from where I was riding my bike to the cars next to me. While I still felt safe enough to ride my bike, I know my mom would not be comfortable riding that path and I would be a nervous wreck if I had kids riding before or behind me.

I was most impressed with the improvements made near Centennial Park. The bike line was protected by a curb which is more visually pleasing than the plastic rods. I hadn’t been to that area and a couple years and was surprised when I saw the protected bike lane. While there are still many improvements that can be made including clearer signage and markings, it excites me that the bike infrastructure is already improved from a few years ago. Once the corridor that connects to Georgia Tech is completed, bikers will have another safe place to ride.

Based on the six Wagenbuur videos, biking in the Netherlands is millions (might be an exaggeration, but also maybe not) times better than Atlanta’s. The Dutch infrastructure for bikes was not always there and did not magically appear, but was created by public outcry over car accidents and fatalities. The Dutch took back the car infrastructure and turned it into cycle tracks. The designs for the bike infrastructure are much different than the United States. A majority of the bike infrastructure in the Netherlands are protected cycle tracks. This design feature allows for safe comfortable biking that people of all ages can use.

Another major design feature is the use of roundabouts. While not all intersections in the Netherlands are roundabouts, many more are than in the United States. The roundabout is a safer option than signalized intersections; it slows cars down and lets bikers have clear priority.

A major design difference also exists in signalized intersection with right turn only lanes. In America, the bike lane is squeezed in between the right turn lane and through lane and is unprotected. In the Netherlands, the bike lane is protected by a curb, placed to the right of the right turn lane, and allows for two phase left turns, but right turning bikes never must stop. While I was doing my project for 4600, I saw the guidelines for America and didn’t really think there was a better way since this was the design handbook. Seeing the Netherlands intersections blew my mind a little bit, and really questioned why we aren’t doing that in America. It also reminded me to always think out of the box even if the book says one thing.

In the Netherlands, cycling is easily above cars for priority and possibly higher than pedestrians. The bikers always possess the right of way and the cars actually stop for the bikes. The intersection design clearly puts bike safety and efficiency as the number one priority. I cannot wait to go to the Netherlands and see the differences first hand.