Bike Tours and World Wars: How and Why Our Bike Infrastructure Differs from the Netherlands

Our class’s first of many cycling tours took place on a cold Friday through the parts of Atlanta depicted in Figure 1 below. I wish I had worn more than just a t-shirt! 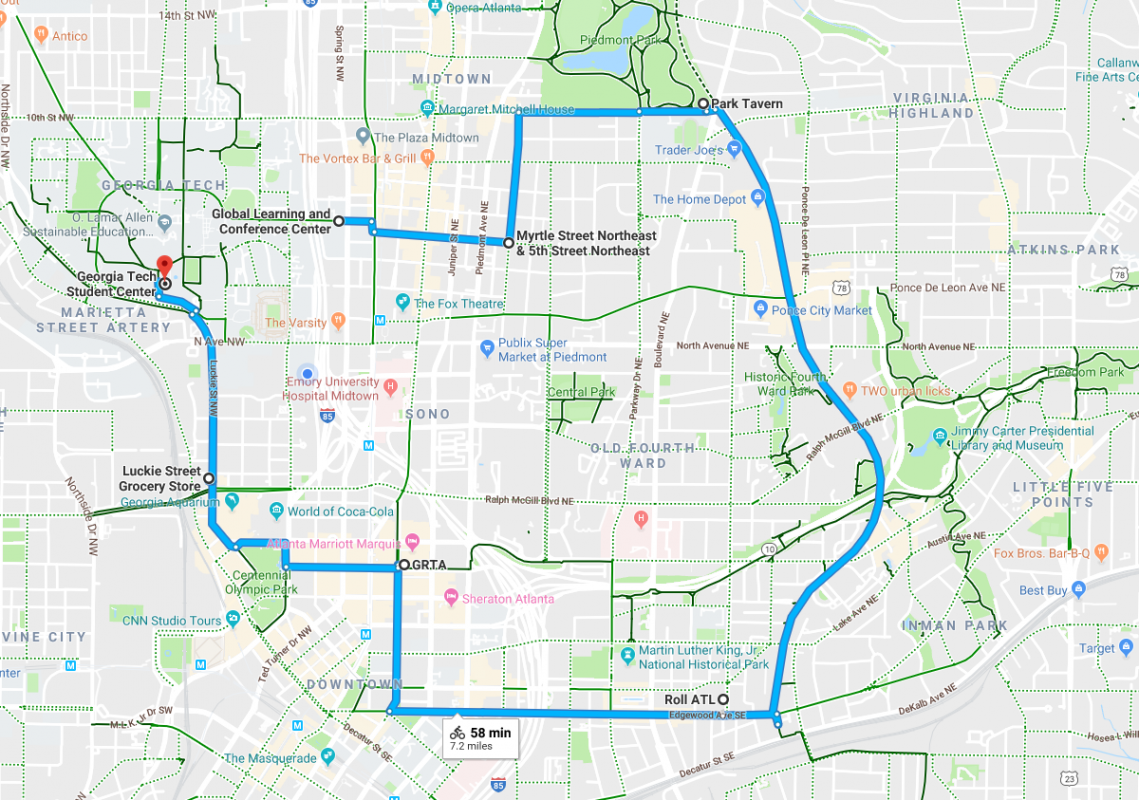 As one can see from the route map, our group traveled quite far and touched on some of the most important areas of Atlanta’s existing and incoming bike infrastructure. The Beltline, 10th Street’s protected cycle path, downtown’s protected bike paths, and new bike infrastructure around Centennial Park were all used. My favorite facility of the tour, however, was definitely the Beltline. Since we toured the route during a cold Friday afternoon there was enough space to truly enjoy all of the sights that the path has to offer without dealing with the large groups of pedestrians that typically use the facility during the weekend.

Getting out of the classroom was especially helpful for my understanding of certain elements of bike infrastructure and their effect on perceived danger to cyclists. Some of the most notable ones will be described further such as sharrows, painted bike lanes, protected bike lanes, shared walk/bike paths, and bikeshare.

Sharrows are markings on pavements built and designed for car travel. They are without a doubt the scariest pieces of bike “infrastructure” that I have used in Atlanta. The limited speed of a bicycle, the greater speed that a car can travel, the discrepancy in safety features, and the poor state of many of Atlanta’s roads all contribute to the feeling of danger that I and presumably others experience while traveling in these lanes. Even a sharrow going downhill, where cyclists can travel at greater speeds, feels much more unsafe than other parts of the cycling network Atlanta has to offer. Figure 2 below shows a typical sharrow. 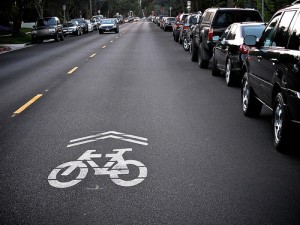 Another of these elements are painted cycle lanes. Painted cycle lanes are marking on the same pavement used for car travel, but in this case, they denote a specific area where only cyclists can theoretically travel. Of course in Atlanta, one of America’s most car-centric cities, drivers are very keen to ignore the purpose of this space and use it for whatever means they deem necessary. It’s not uncommon for a driver to temporarily stop in the space, for parked cars to open their doors into the cycle lanes with approaching users, or even for bus drivers to stop in the lanes. Additionally, turning left (these lanes are typically on the right side of flowing traffic) pose danger as the bike must leave allocated space and enter the space allocated for cars. For these reasons, I ‘m not entirely comfortable using a painted bike lane, but I prefer them to sharrows and a lack of infrastructure. I would say that others would feel similarly. Figure 3 below shows an example from Google Maps of the Tech Trolley on the campus of Georgia Tech cutting into the painted bike lane. 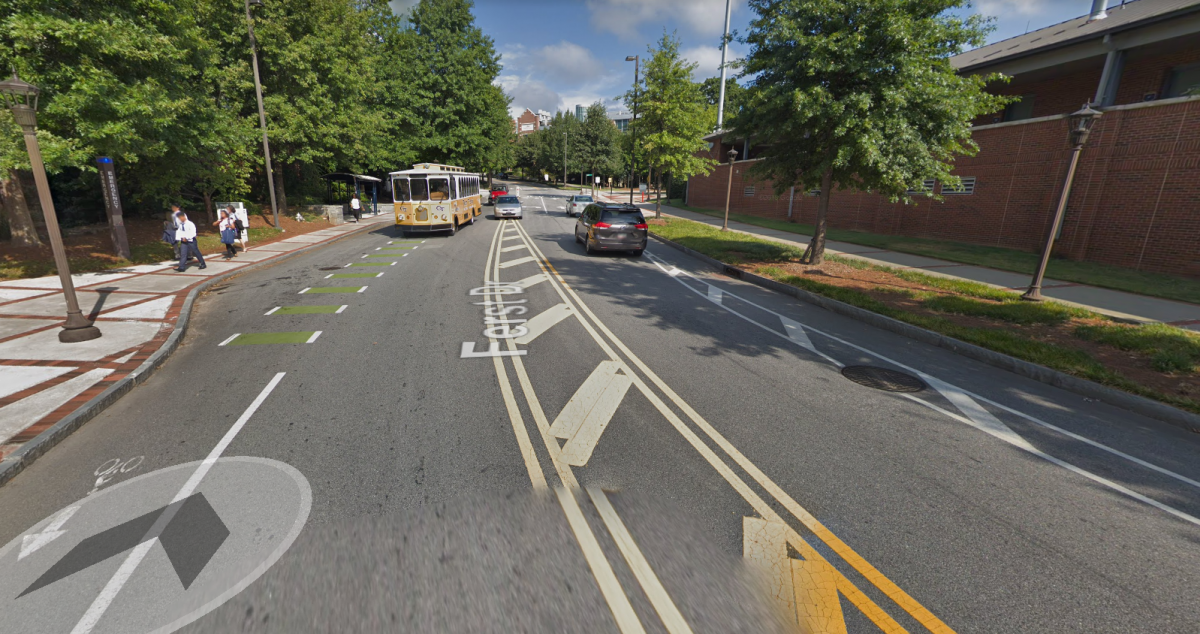 Protected bike paths and lanes are better in my opinion than both painted bike lanes and sharrows. They offer a true physical barrier between humans operating a small device and other people driving multi-ton devices of power. In Atlanta, there is variation between the types of protection that occurs, whether it be plants with a concrete pot, a small curb (as seen just east of Centennial Park), or the white pylons that can easily be knocked down by a car. However, any of these devices do more than prevent a car from using space allocated for bikes. They create a feeling of separation, so that bikers feel as if cars are no longer a threat or worry (aside from intersections) and car drivers feel as if they do not have to worry about the bikes (which is unfortunate when the two modes intersect and this causes an accident). Figure 4 below shows the 10th street cycle path, which is protected with the interspersed white pylons.

The next key element of Atlanta’s bicycle infrastructure are the shared bike/walk paths. These paths are car-free but have no delineation of where bicycles and pedestrians should travel, but rather, one path where bicycles can maneuver around pedestrians. Sometimes there is a marking or feature in the middle that signals where the directions of travel should separate, so that a head-on collision is avoided. During non-peak use hours, these paths work well, feel safe, and safe space. However, during peak hours of pedestrian use, cycling on these paths is almost impossible. For this reason, I enjoy using these features sometimes but cannot depend on them. I would think that other feel similarly, although the most fearless and unforgiving of cyclists may take on the challenge of fighting for space on these paths during peak hours. Figure 5 below shows the Beltline in use during a time where a skateboarder (and presumably cyclists as well) can maneuver around pedestrians. 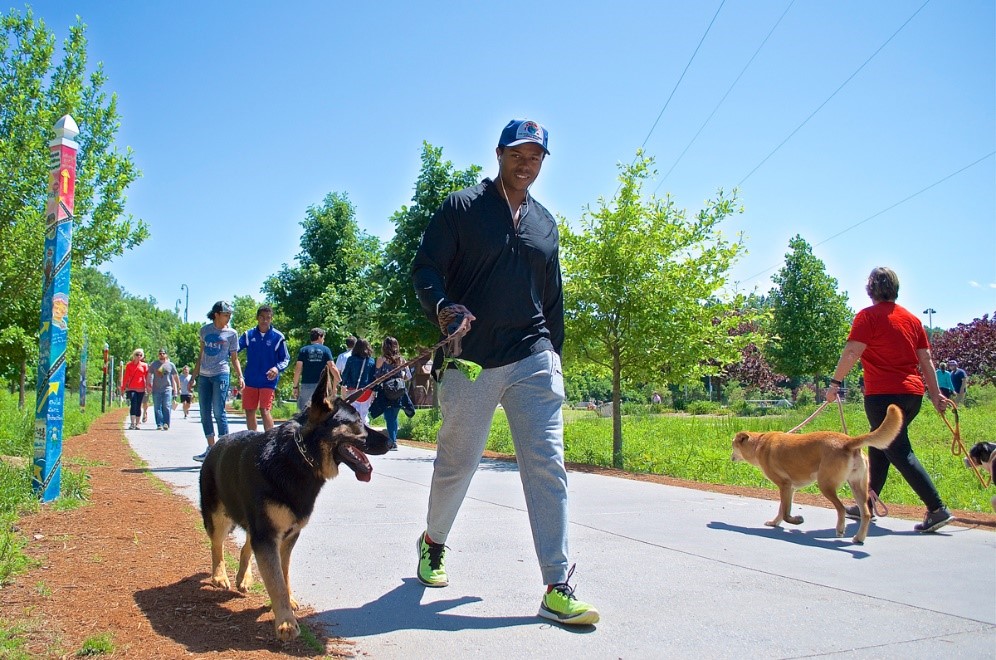 Figure 5: The Beltline Trail in Use (Source: Atlanta Magazine)

The final key element of Atlanta’s bicycle infrastructure is the bikeshare that has sprouted up in the pat few years. Both Relay Bike Share and Jump are companies that have placed hundreds of rentable bicycles around the city for temporary use by a number of people per day. By downloading an app and paying a relatively small fee, anyone in the city can get on a bicycle in a matter of minutes despite not owning one at all! These bicycles are certainly not as easy to use as a road bike that is commonly privately owned, but they still feel safe and convenient to use. I would assume that others would have potential problems with the fees, weight of the bicycles, and the small numbers of gears which make cycling harder on these bikes. Figure 6 below shows a dock for Relay Bikeshare. 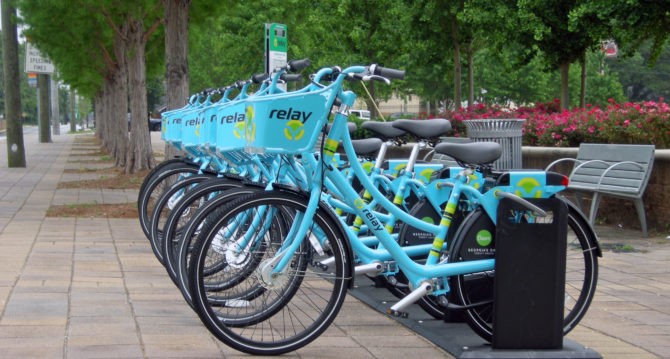 Oh, where do I start? Given that the purpose of this class is to open my eyes on the discrepancies between the Netherlands’ world-class bicycle infrastructure and Atlanta’s bicycle infrastructure, it’s understandable that our system is currently inferior. Two main differences that planners and engineers need to take note of are intersection design and perception.

Intersections in the United States typically follow the idea that cars come first, and that car throughput is the priority in design. Therefore, keeping space for vehicles and giving as much time as possible during a traffic signal are more important than designing for what is usually only a few cyclists day anyway. While I disagree with this idea, it is important to understand that the measures of performance that road designers are judged upon in America are almost exclusively car-based, so design for cycling will understandably always come after until this is changed. Figure 7 below shows a street view of the intersection of Edgewood Avenue and Jackson Street, where space and quality pavement are allocated to vehicles. 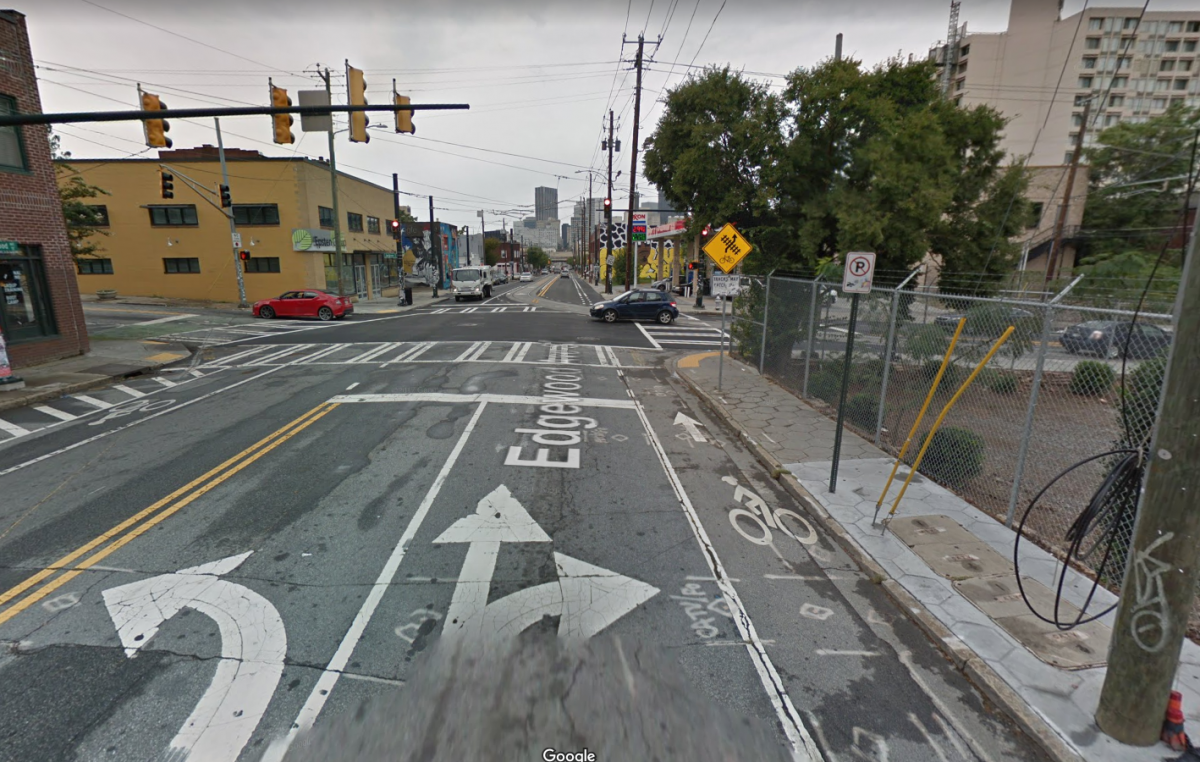 It is also notable that the Dutch more heavily promote the use of roundabouts than Americans, who typically stick to intersections and ninety-degree angles with either traffic signals or stop signs. While roundabouts are growing in popularity in America for safety and sometimes traffic flow reasons, it is undoubtable that the expansive use of this feature improves safety for cyclists and motorists by slowing down cars. Additionally, the fact that the Dutch design roundabouts with space for a car to wait for a crossing bicycle or pedestrian undoubtedly improves the safety of all parties involved.

The final consideration to be made in the future by American planners and engineers is the grade of cycle paths with respect to vehicles. Cycle paths are slightly above the grade of vehicle paths, meaning that when cars wish to cross a cycle path, their elevation is raised. This can in turn notify the driver that they are crossing into space allocated for a more vulnerable mode of travel. The same concept is also applied to pedestrian paths, which are a slight grade above cycle paths. During some crossings, even, cars are made to drive over or under cycle paths since they have plenty of horsepower available to do so. This makes cycling even easier since crossing paths and changing elevation are both avoided.

Perception of on-car travel in the United States is very poor. The car is a status symbol and a cultural requirement to many Americans, most of whom fell in love with the devices during or because of the spark in urban sprawl that occurred during the 1950s. Therefore, those who use bicycles for travel are often perceived as less affluent than those with cars. When this is not the case, however, cyclists can be seen as an annoyance to drivers because of the aggressive nature of those who dare to share space with cars on American streets which don’t allocate separate space for them.

In the Netherlands, however, cycling is a common aspect of life. The bicycle is a preferred mode of transportation because of its ease, cost, and benefits. What widespread bike use in place of automobile use has done for the Netherlands is pridefully shared by those who fought for the current system.  As a response to planning changes to accommodate increasing traffic that destroyed parts of cities, a large number of casualties, and a dependence on foreign countries for basic transportation, many Dutch citizens protested their government in favor of more bicycle infrastructure. Now that we are a few decades into the future, presumably most citizens of the Netherlands have a positive perception of cycling and land use dedicated to the transportation mode. Given that the United States is still relatively dependent on foreign countries for oil (the type we use in our vehicles, that is), the large number of traffic accidents that still occur, and the detriment that vehicle land-use has caused to our cities, the chance to change public perception on biking in here and should be taken.

There are a few reasons why I think that biking developed differently in the United States than in the Netherlands. They are listed below.

While there are certainly more reasons as to why the development of bicycle infrastructure occurred so differently in the Netherlands than in the United States, these are the main reasons that I would assume played the biggest roles in this phenomenon.

50 Best Things to Do in Atlanta: Walk, bike, run, or skate down the BeltLine. https://www.atlantamagazine.com/50bestthingstodo/walk-bike-run-or-skate-down-the-beltline/. Accessed Feb. 15, 2019.