To get a taste of the bike infrastructure in a big American city, our class set out on a bicycle tour of Atlanta. We first headed North, riding through some neighborhoods to get to Piedmont Park. It was a rocky start with a lot of stop and go movement from all the traffic signals along 5th Street. But once we got to Myrtle Street, the quiet neighborhood atmosphere was very bike friendly. Then down 10th Street, we rode along the first cycle track created in Atlanta in 2013. This nicely connected onto the Beltline, which took us to our destination at Krog Street Market. Since it was a chilly Friday afternoon, there were very few people out, making it even easier for our large class to stay together. This was my favorite part not only because of the flat, smooth ride but also because of the beautiful artistic atmosphere along the Beltline. It felt like an escape from the traffic and commotion of the city. More infrastructure like the Beltline is needed in Atlanta, because everyone would enjoy their ride and feel safe. After reaching Krog Street, we biked through streets of downtown Atlanta to Centennial Olympic Park. The last stretch of our journey was to ride along Luckie Street, back to Georgia Tech. I was really surprised to see several streets with protected bike lanes, especially along Luckie Street as seen in the picture below. Those segments made the journey feel pleasant and safe. However, in the absence of this infrastructure it wasn’t as nice, especially between the Beltline and Centennial Olympic Park, where the bike lanes along major roads felt unsafe at times. Overall, I think there’s been great progress in Atlanta’s bike system. This trip showed me that there is a focus on increasing its safe bike network, like the developments of protected cycle tracks along 10th Street and Luckie Street. But it would be even better if more bicyclists were out on the streets. Cars would be more aware of them, as well as the fact that less vehicles would be out on the roads. For this to happen, even more bicycle networks, especially protected bike infrastructure, need to be put in place to connect all areas and neighborhoods within the metropolitan area. 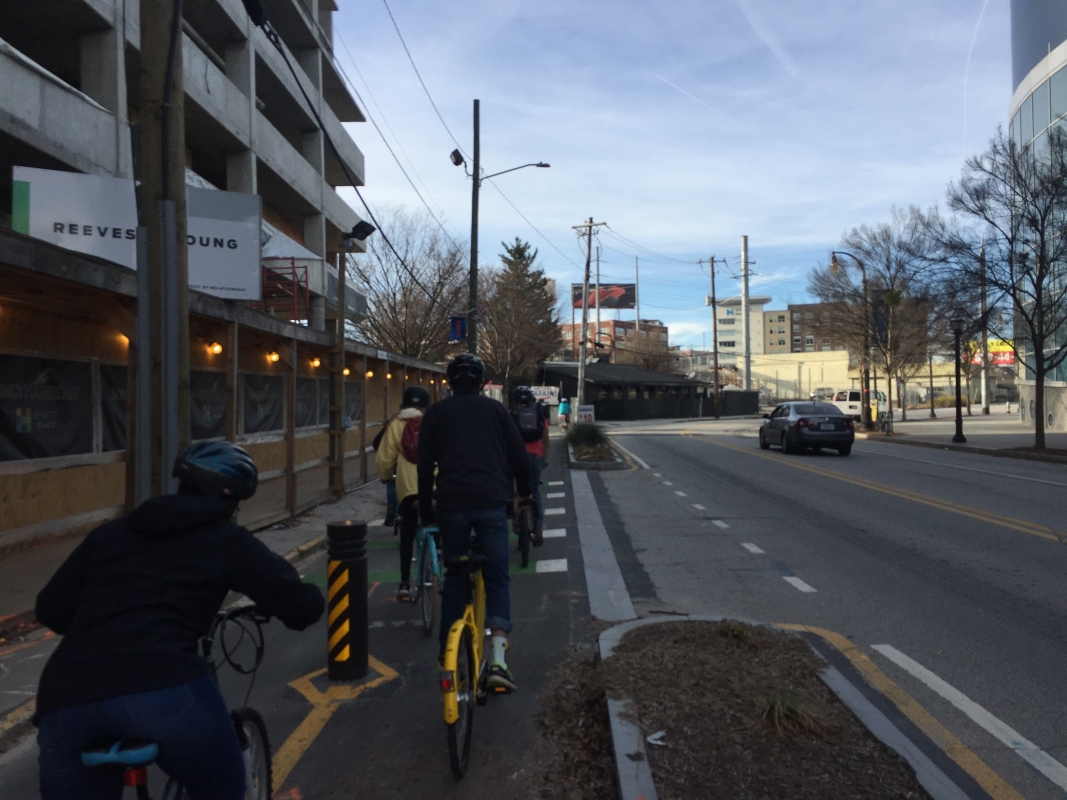 It’s impressive to see how the Netherlands created such a safe and efficient bicycle network, while accommodating high densities of cyclists. With the world’s largest number of cyclists, it is also one of the safest places to ride because of their successful infrastructure. Dutch street designers believe that there is always room for cyclists. They incorporate cycle tracks along the side of the roads to separate motorized vehicles from bicyclists. And they find safe routes for cyclists at junctions without hindering the flow of cars. For instance, along roundabouts bicycles have priority over cars, so vehicles are given space outside of the inner circle to stop for cyclists if needed. This allows cars to be cautious for cyclists and pedestrians without stopping the flow of traffic in the roundabout (Wagenburr, 2014). However, safe junction designs are not seen in America. Even though several major cities have incorporated some measures of safe bike lanes, all protection for cyclists is lost at the junction of intersections, where it is needed the most. Cyclists have to merge with cars to turn. They have to be aggressive at times and must often sprint to keep pace with the vehicles. That is why cycling is not often used as a means of transportation, like it is in the Netherlands. In America it is often perceived as a leisure activity, where people will ride around in safer parks and neighborhoods in their free (Wagenbuur, 2013). Whereas in the Netherlands, bicycles are seen as a necessary form of transportation to get to local destinations. They will use it to get to work, to run errands, and even to take their children to school.

The safe bicycle infrastructure in the Netherlands evolved from their cultural needs at the time. While both the U.S. and the Netherlands saw a drastic rise in cars following World War II, cities in the Netherlands could not cope with the traffic. A very high number of bicycle and pedestrian causalities exponentially increased with the presence of more cars on the road, which caused public outrage throughout the country. On top of that the oil crisis of 1973 led to gas shortages and high prices for oil. Both of these problems greatly impacted the country. And the Prime Minister at the time realized the need for change. From there several policies were put in place to encourage alternative transportation. And local communities began to develop complete and safe cycle routes (Wagenbuur, 2011). However, in the United States, our country is heavily reliant on cars because of there is so much sprawl. Cities are expanding, and suburbs are even farther away, making it unrealistic to encourage commuters over 40 miles away to bike to work.

Wagenbuur, M. [BicycleDutch]. (2013, June 19). Cycling in the US from a Dutch Perspective [Video file]. https://www.youtube.com/watch?v=m2THe_10dYs&feature=youtu.be