The Georgia Institute of Technology’s Sustainable Transportation Study Abroad course in the Netherlands teaches students about the Dutch approach to solving transportation problems. The class exposes students to different applications of bicycle infrastructure and provokes them to study what elements support an integrated multi-modal system. As part of course work, students are assigned a corridor in Atlanta to redesign based on Dutch practices. Our team identified Marietta Street NW as a corridor in desperate need of bicycle and pedestrian infrastructure. 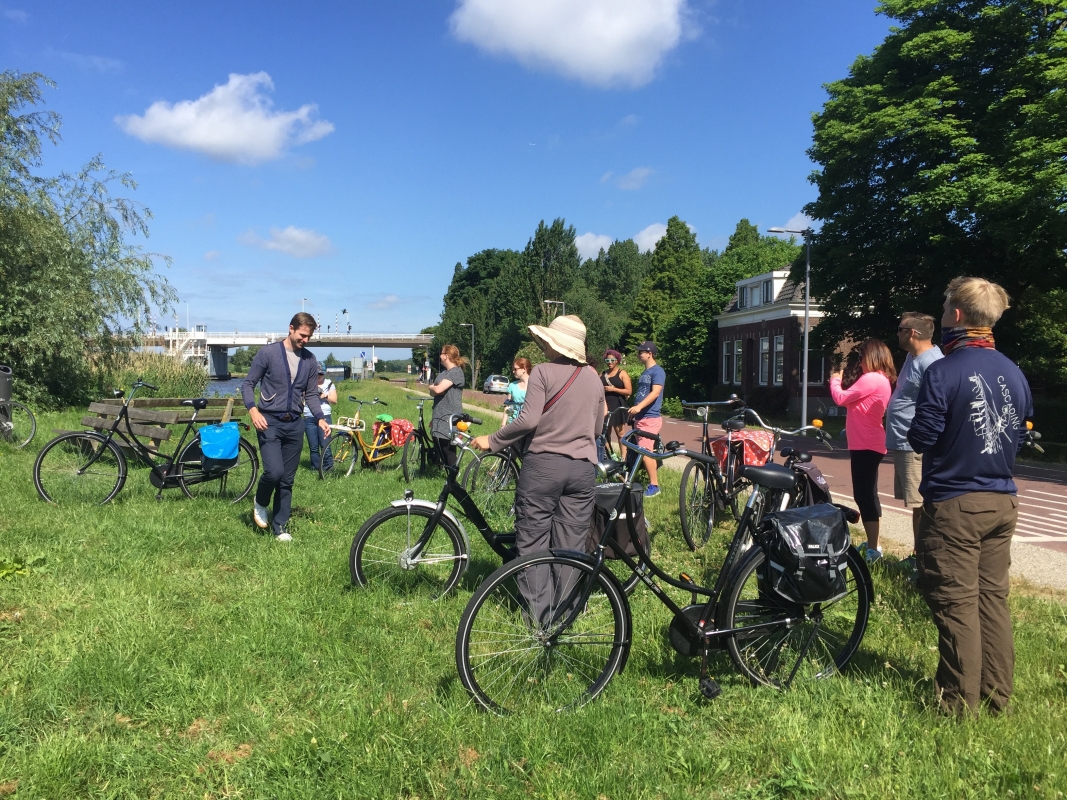 Figure 1: On-route between Delft and Rotterdam

What We Learned Abroad

The Netherlands embrace the philosophy that the safest and most efficient transportation system is one where bikes and pedestrians, for the most part, are separated from vehicular traffic. Cycle tracks have become their standard bicycle facility on all four lane roads and streets with speeds greater than 31 mph. The separation of bicycle and vehicular traffic has resulted in a high percentage of the population choosing to bike as a means of transportation. In 2008, 28% of all trips in the Netherlands were made by bike (Bueller and Pucker, 2012). 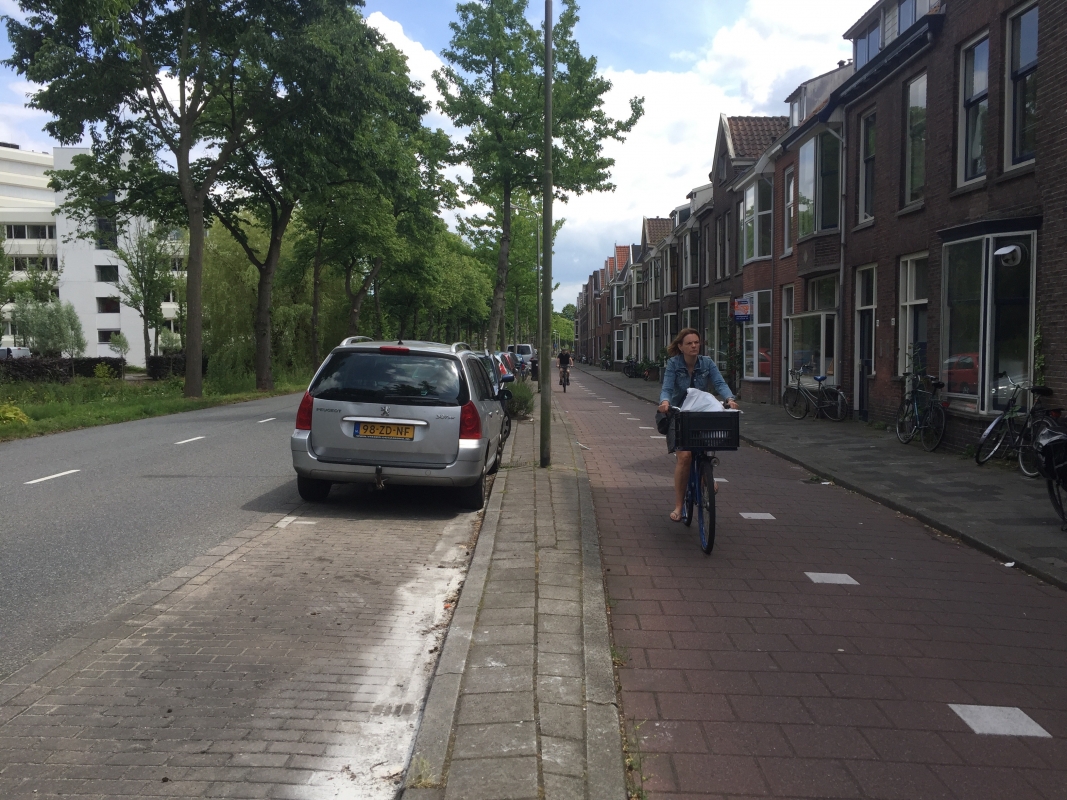 Riding bikes through urban and rural areas, in the Netherlands, made it apparent how effective separating bike from cars is in increasing the number of people who bike. We learned that bicycles are given priority at most minor intersections and, instead of pedestrians and cyclists stepping down to street level at the crossing, vehicles have to drive over the sidewalk and cycle track, which slows them down similar to a speed bump. Major intersections were excessively marked with on-street paint and vertical poles to alert all roadways users that they were entering into a potential conflict zone.

Marietta Street NW is the 4-lane “back-road” connection between northwest suburban cities, like Smyrna, to downtown. With nearly 20,000 vehicles per day, Marietta is a popular alternative to interstate I-75. In addition to serving as a regional connection, a large population of students use the facility to commute to Georgia Tech’s campus. The land use bordering the section of Marietta Street that runs along the west side of the Georgia Tech’s campus is transitioning from industrial to mixed-use, with a large percentage of student housing. Currently, Marietta Street has a speed limit of 30 miles per hour with no bicycle facilities. 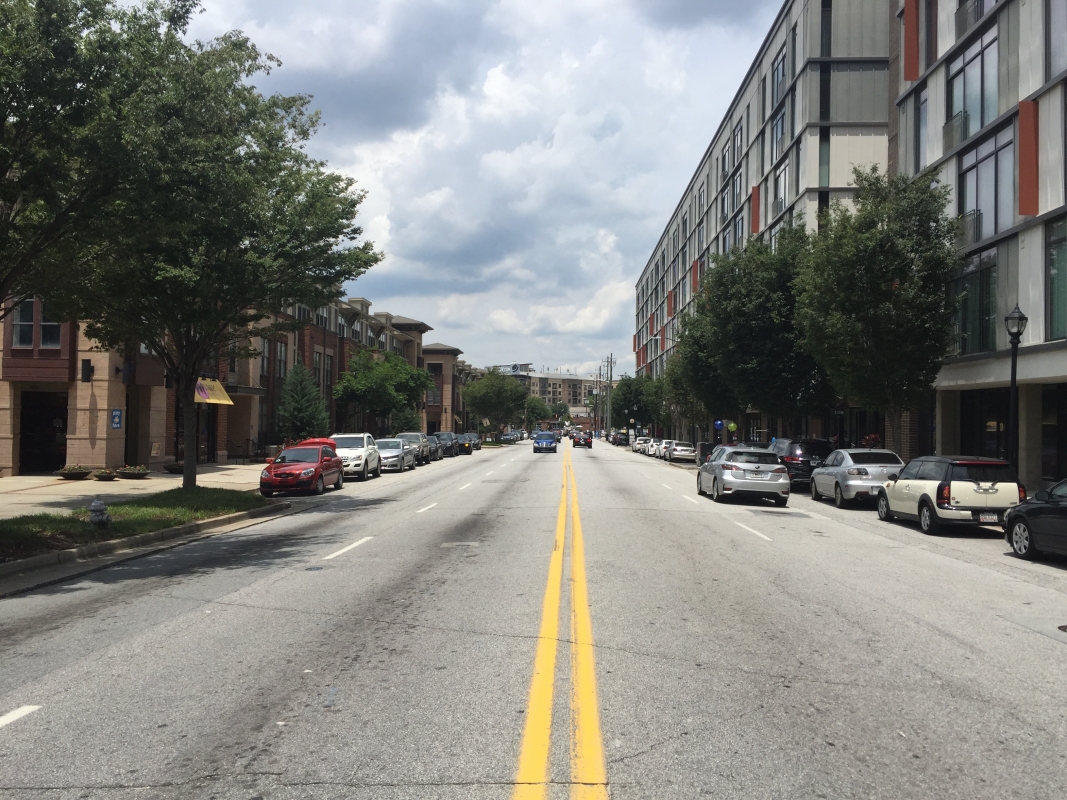 The City of Atlanta recognizes the need for better bicycle and pedestrian infrastructure along the corridor and has created a series of plans to guide redevelopment. In the Connect Atlanta Plan, Atlanta’s comprehensive transportation master plan, Marietta Street is identified as a part of Atlanta’s core bicycle network. The Cycle Atlanta Plan: Phase 1, a supplemental design manual to Connect Atlanta, provides detailed facility design recommendations for five of the “Core Bicycle Corridors” that extend from the Atlanta Beltline into the City of Atlanta. Specific roadway configurations for Marietta Street NW are included in Corridor B and Corridor E of the plan. The entire network plan can be seen in Figure 3 below. 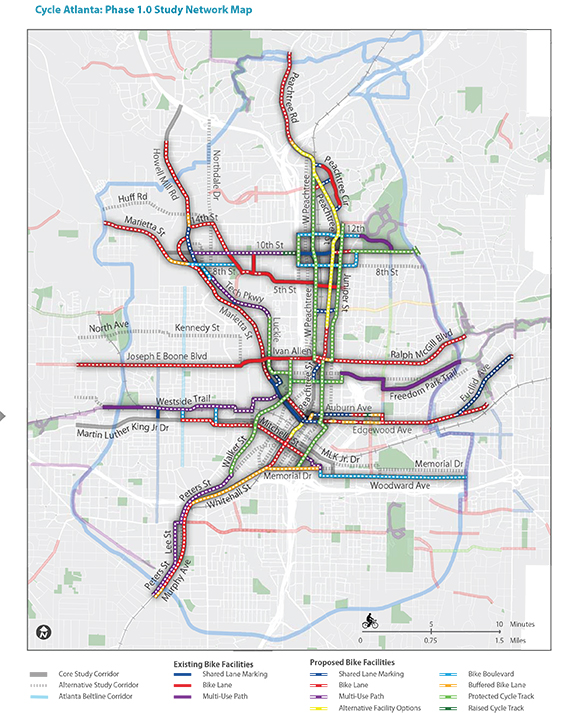 In both the United States and the Netherlands, vehicle volumes and speeds dictate the type of bicycle infrastructure required on a roadways. The policy in the Netherlands is based on the philosophy that greater speeds and vehicle volumes necessitate separation between bicycle and cars. While the United States is beginning to see the benefits of cycle tracks and off-street paths, the culture is still hesitant to take space away from cars and replace it with higher quality bike infrastructure. The designs proposed in the Cycle Atlanta: Phase 1 Study push the envelope by removing two vehicle lanes and  risking short-term congestion, along the corridor. However, the recommendations are conservative. The plan proposes standard American bicycle infrastructure; 4 ft. on-street bike lanes, shared lanes marked with sharrows, and a small section of 9 ft. on-street buffered bike lanes. While the new bicycle facilities would improve the roadway considerably, they are still not up to Dutch roadway design standards and might not attract a large number of people to use the corridor as a bicycle commute route.

The objective of this project is to stimulate bicycle and pedestrian traffic along the Marietta corridor by providing facilities that allow users to feel comfortable connecting from the Westside to the cycle track along Tech Parkway.

Following Dutch design policy, we propose adjusting the Connect Atlanta design by reorganizing the space allocated for bicycle infrastructure. Our alternative design adheres to the idea that bicycle and cars should be separated on roads with speeds greater than or equal to 30 mph and proposes installing a two-way cycle track that stretches from Hampton Street to Joseph E. Lowry. 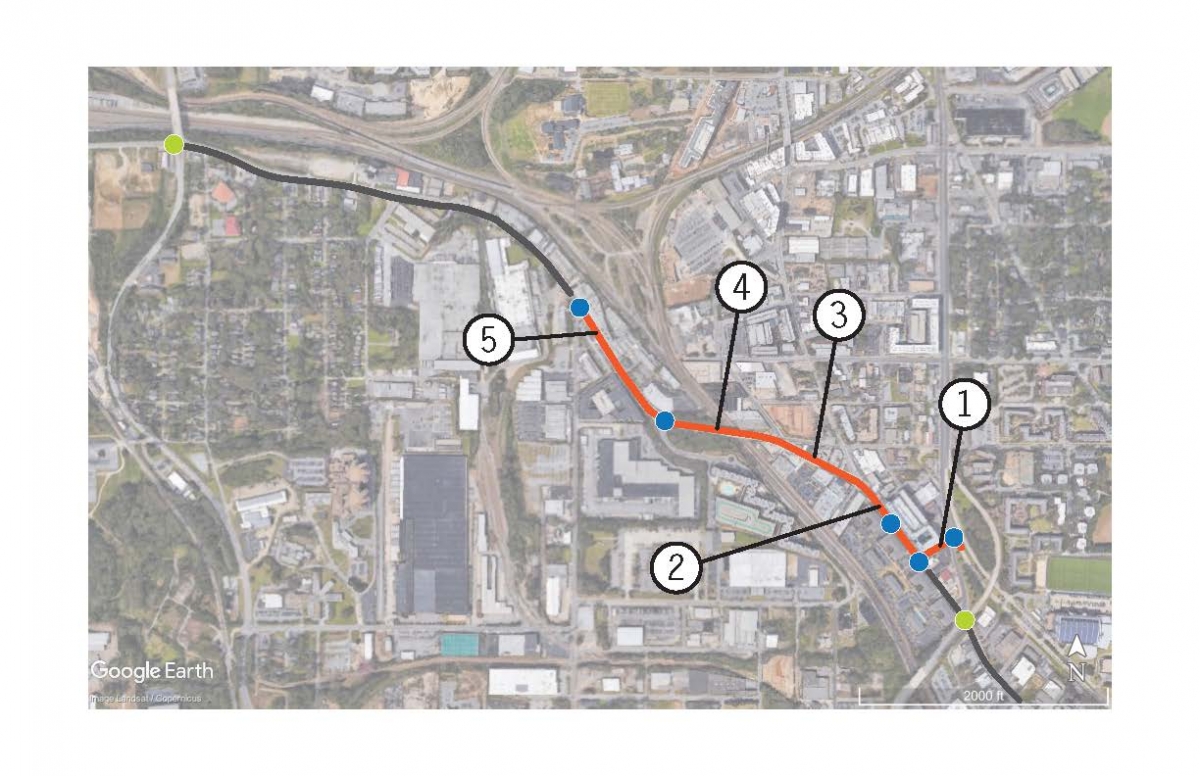 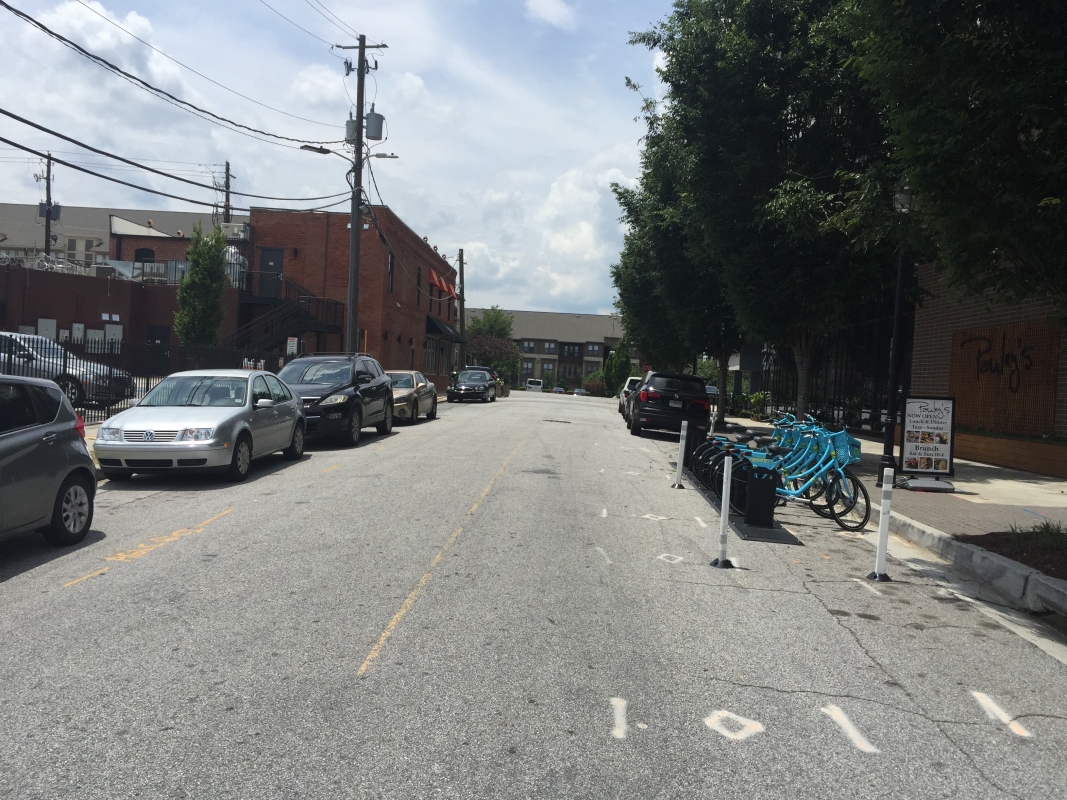 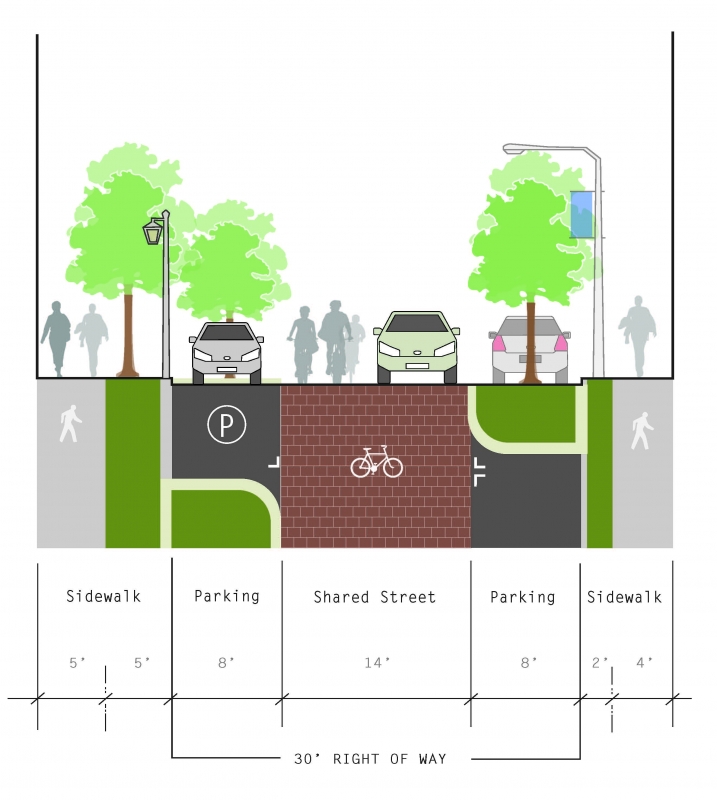 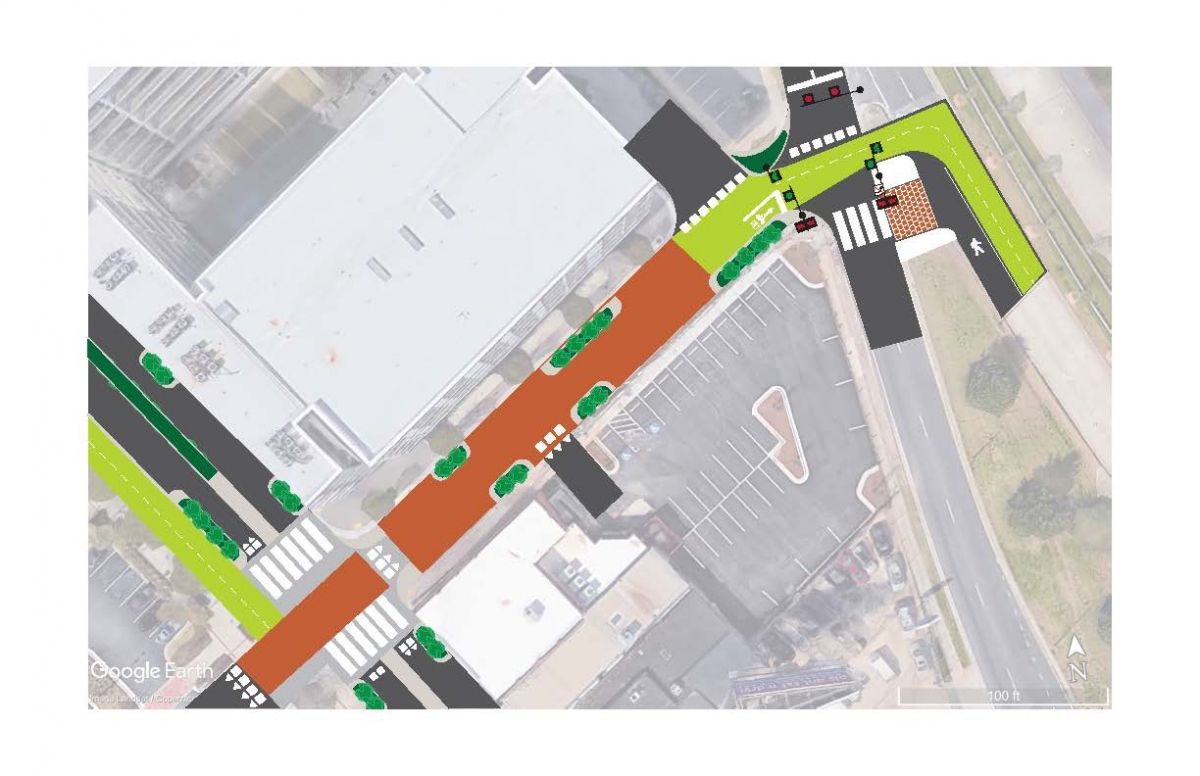 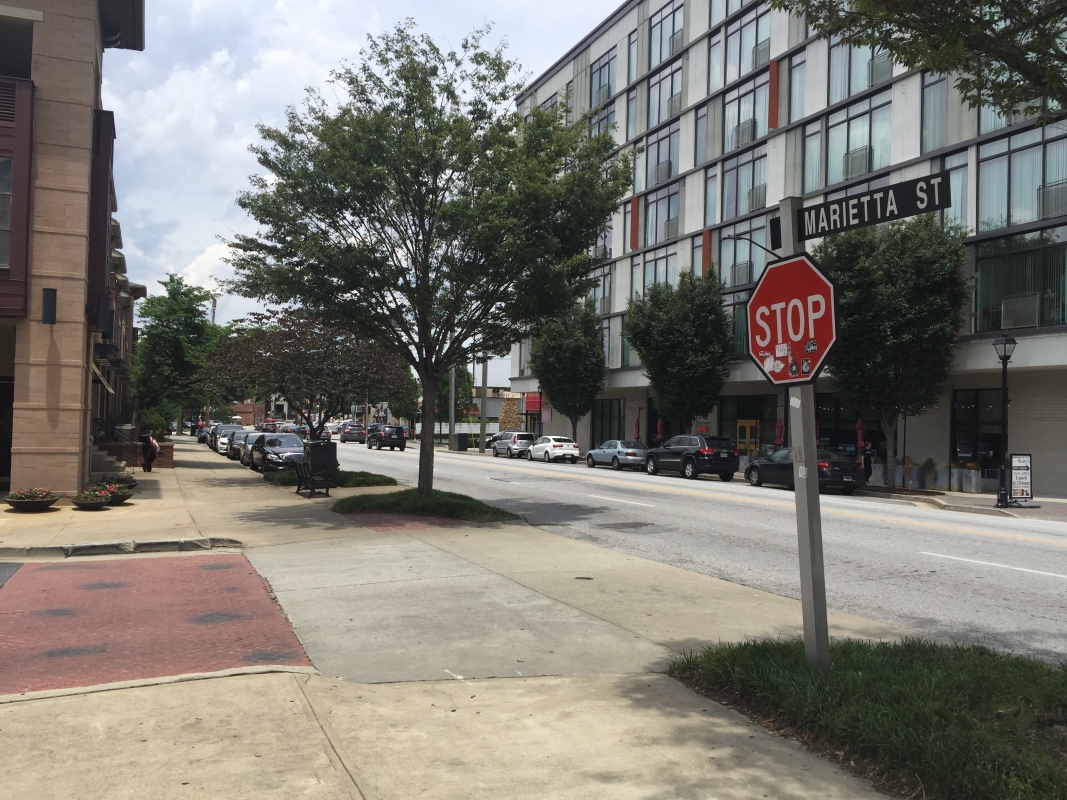 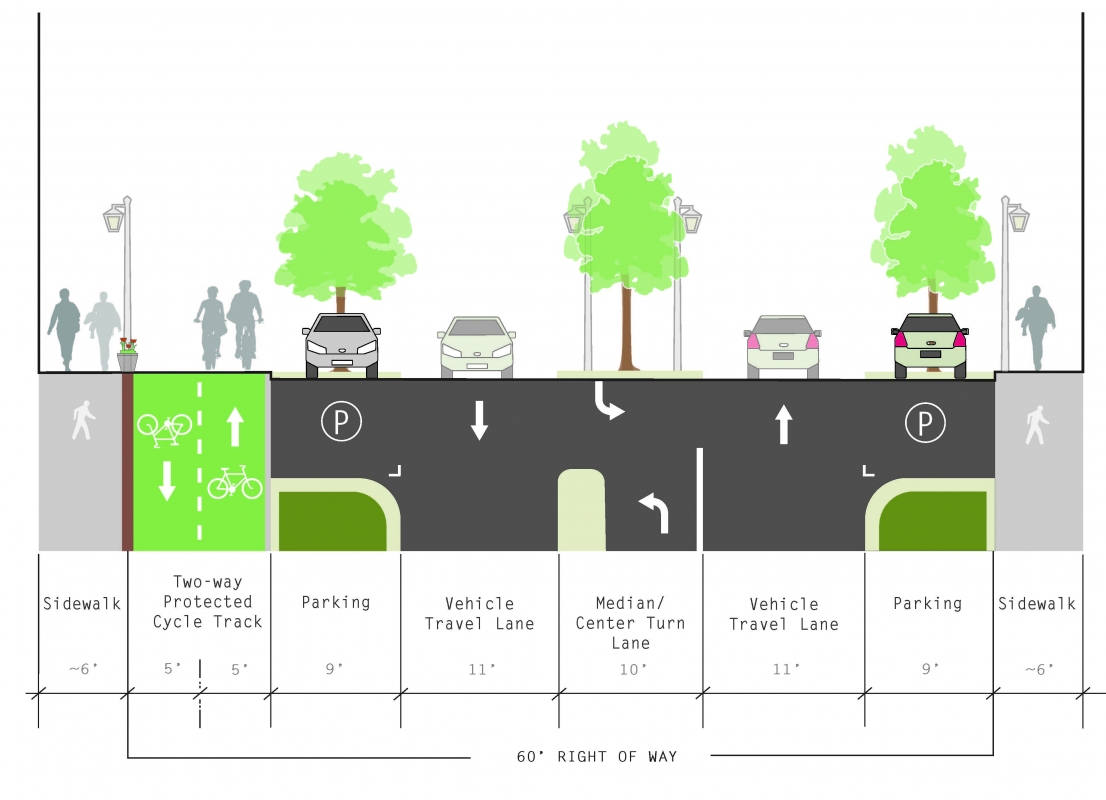 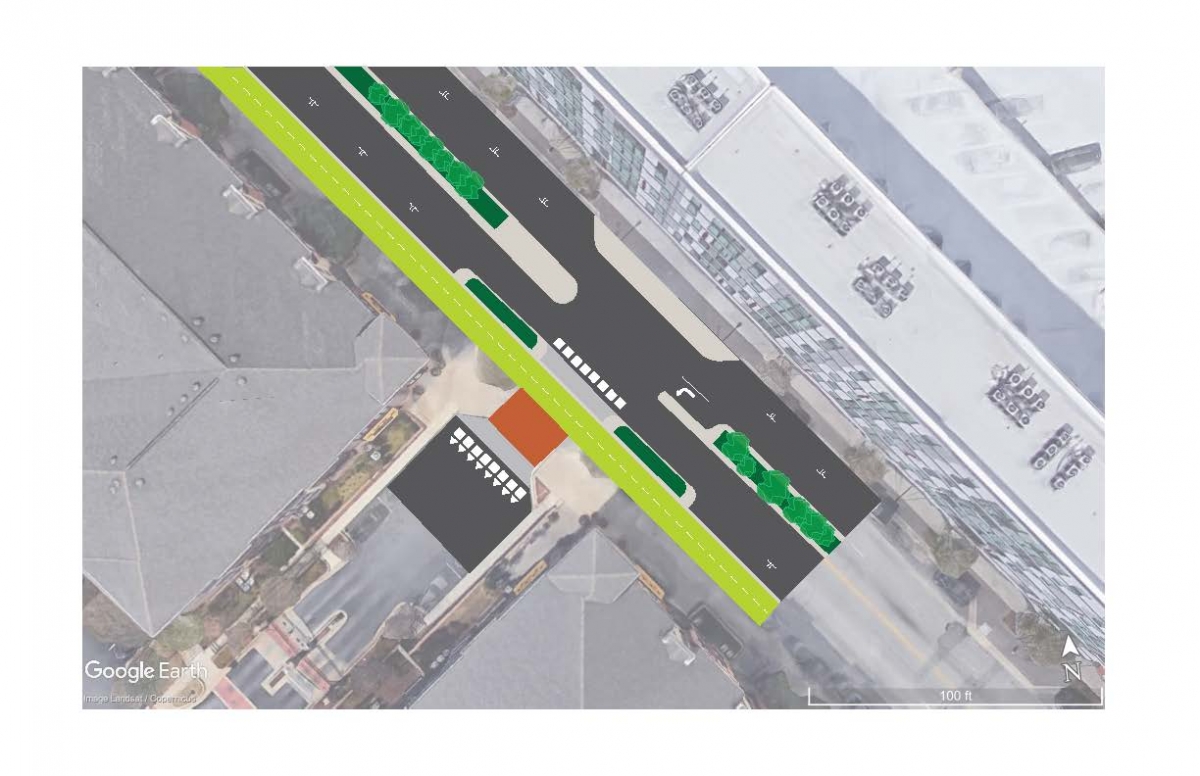 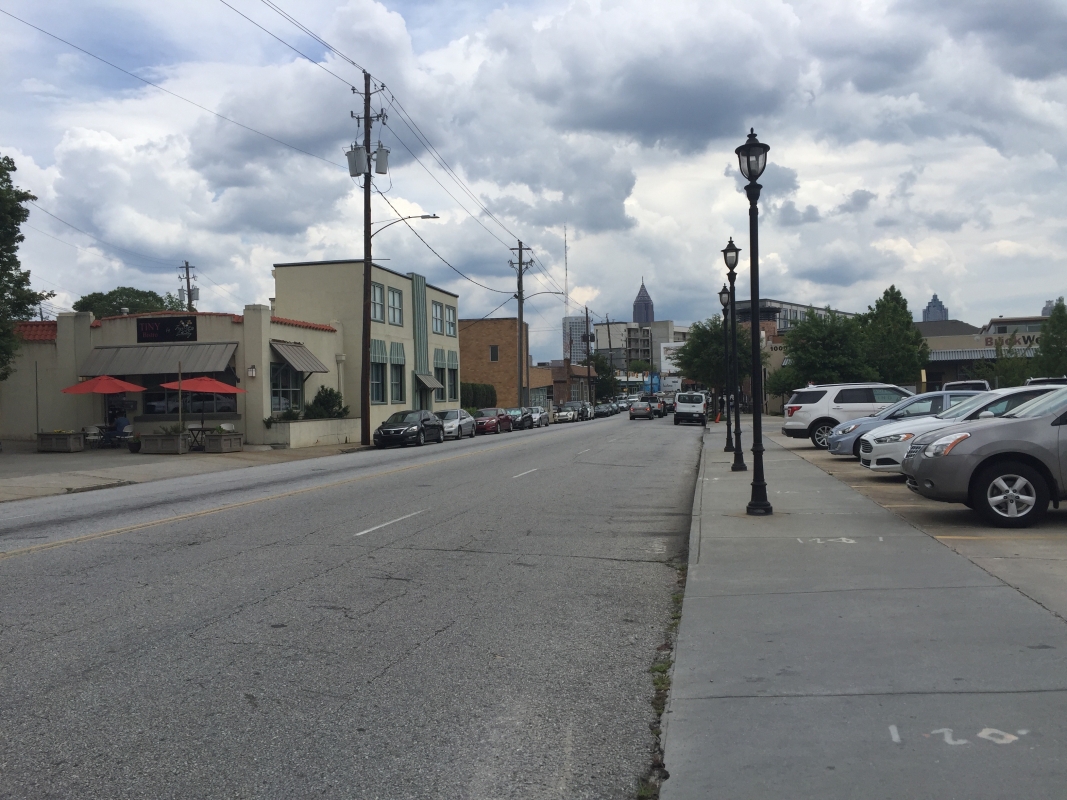 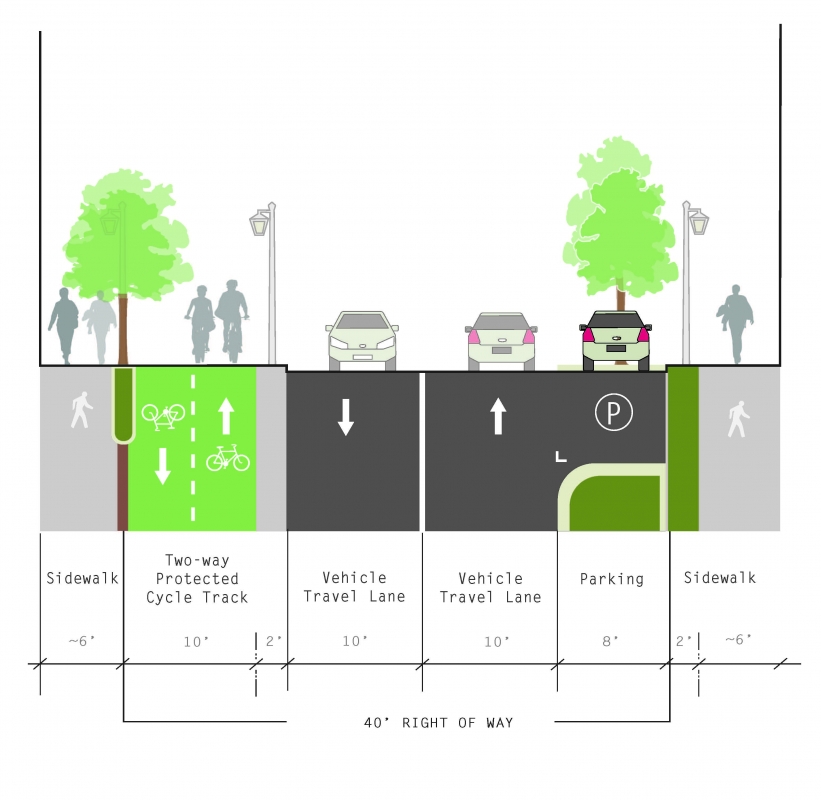 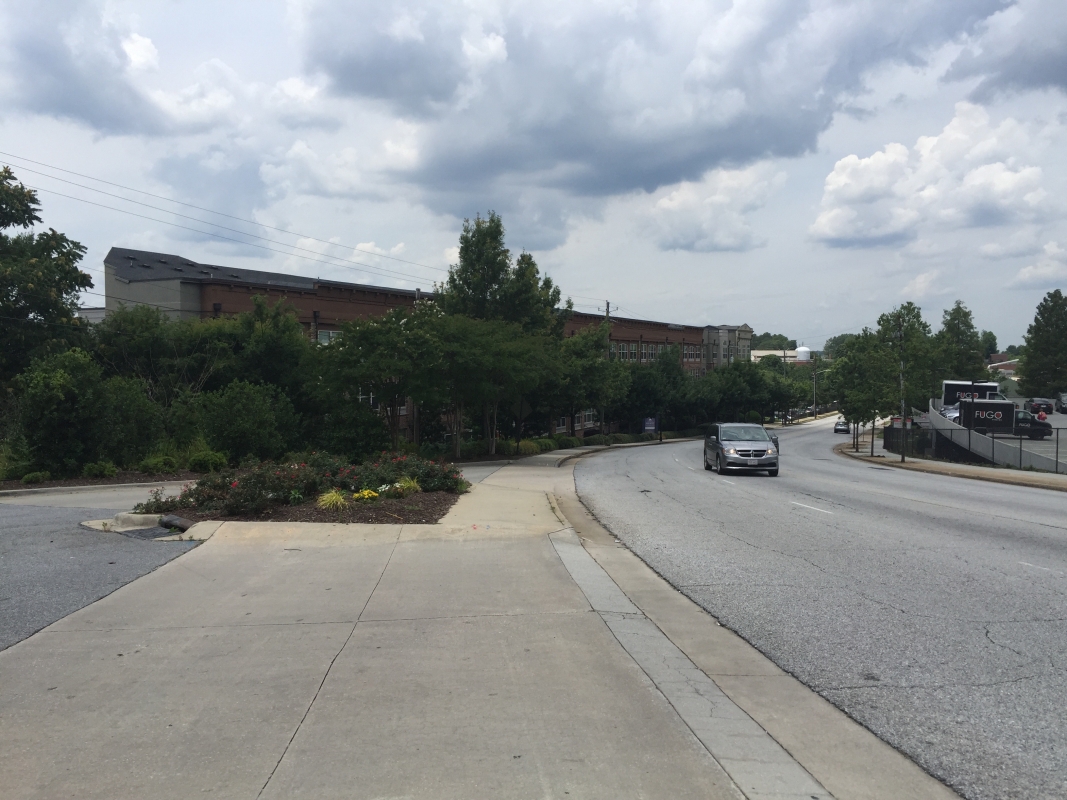 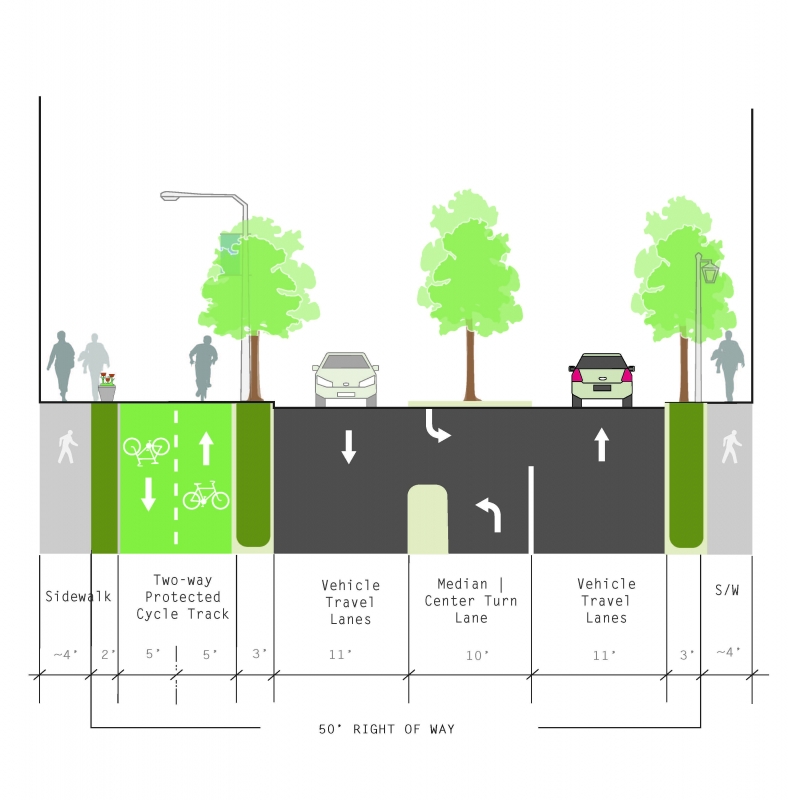 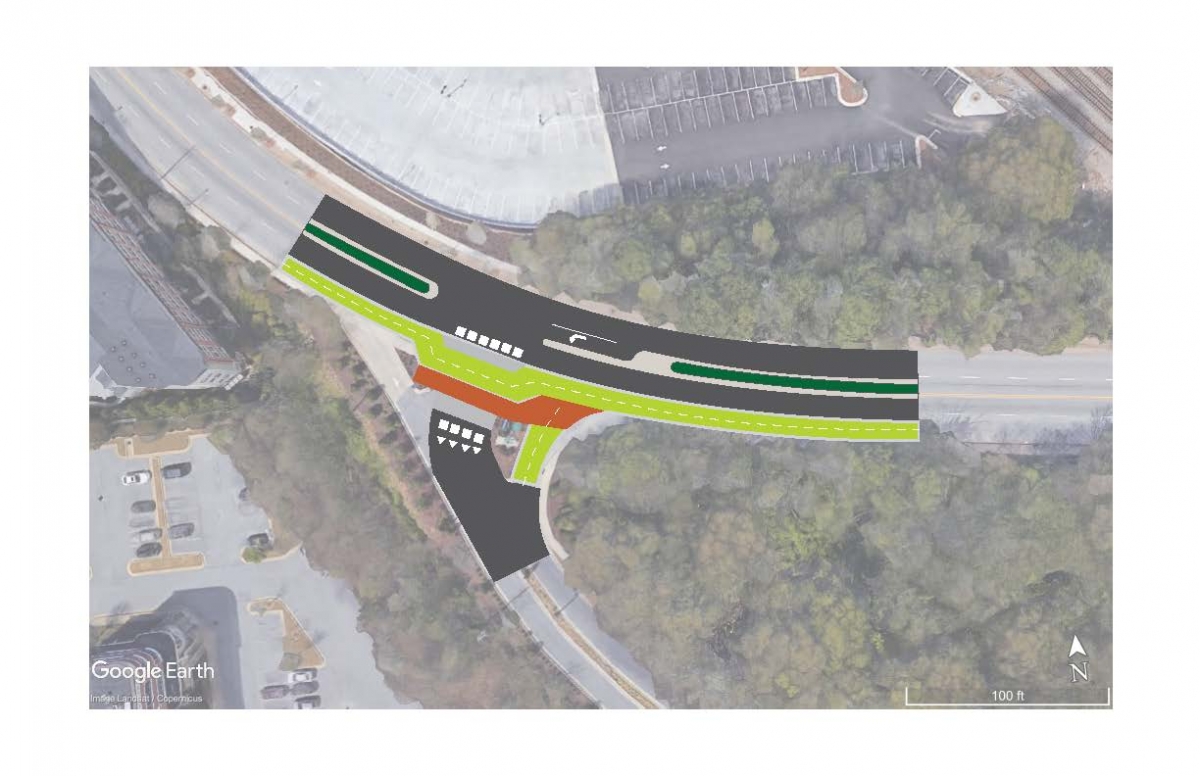 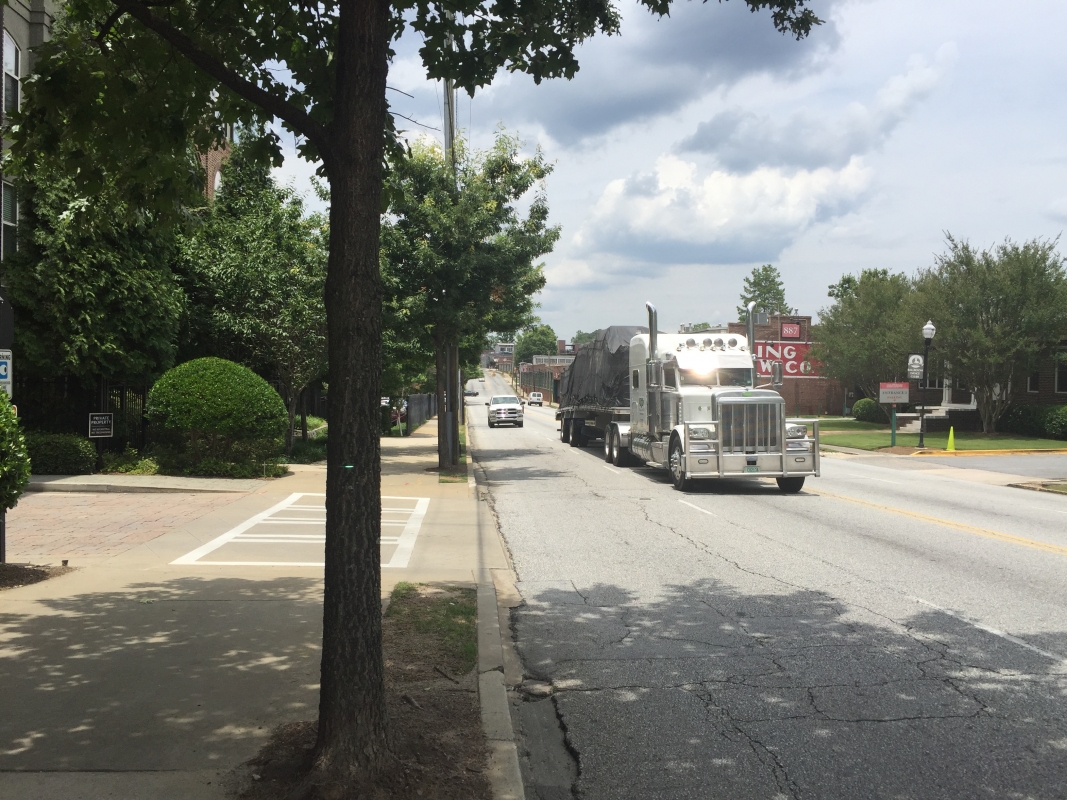 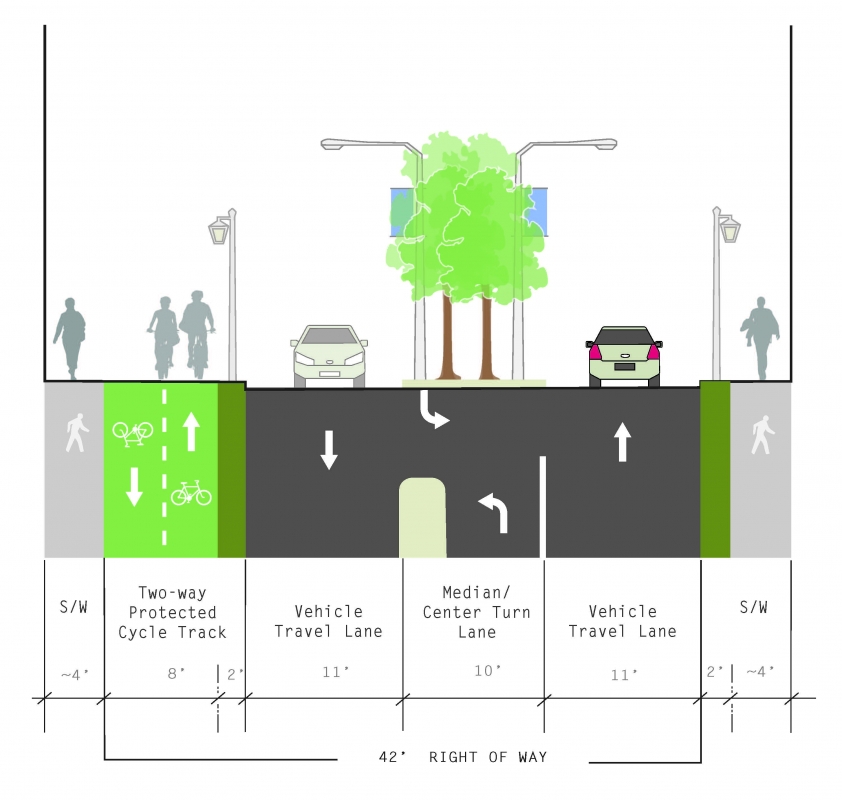 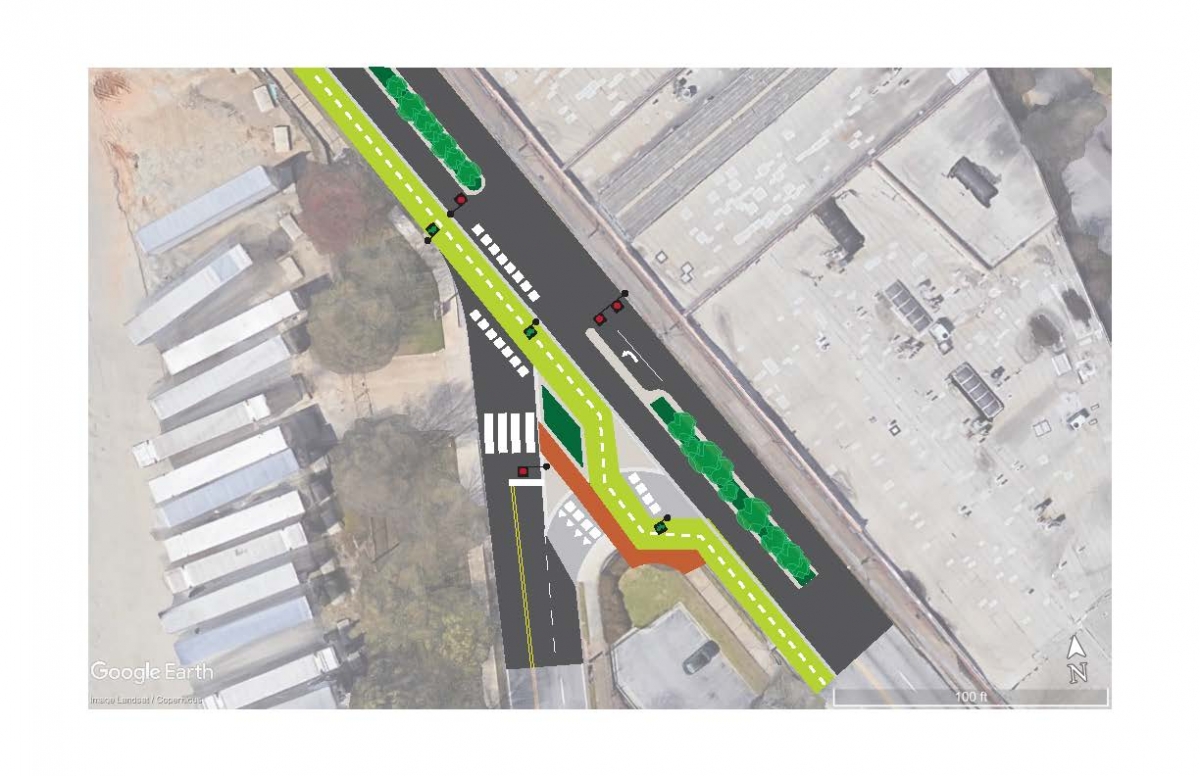 By providing protected infrastructure for cyclist, we hope to stimulate more bicycle activity and encourage students to bike to campus, instead of drive. Designing the infrastructure is only one part of the initiative to support people biking as a means of transportation.

To stimulate a large scale mode shift, policies need to be changed at the city and state level. Policies need to place cyclist and pedestrian safety and comfort at the top of every roadway project, instead of prioritizing vehicle throughput.

The challenge with implementing high quality bike facilities remains a chicken and the egg type of problem: Policy change and infrastructure improvements will only come about if the culture supports it, yet at the same time we need bike infrastructure to increase the number of cyclists and strengthen our bike culture.